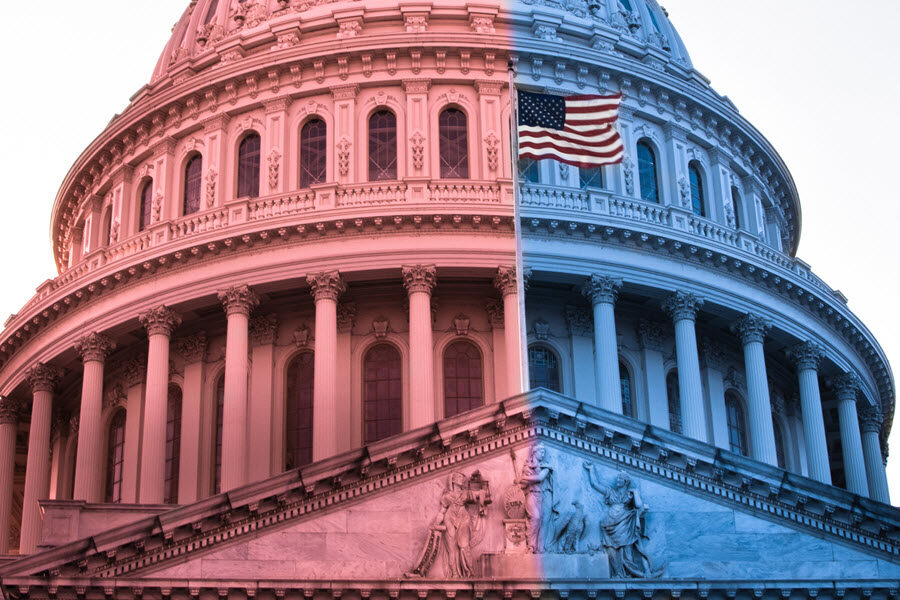 I haven’t seen much humor in life during the past year or so, but one thing that has been uproariously hilarious lately is the orchestrated media narrative that President Joe Biden is bipartisan and conciliatory. Please give me a moment to catch my breath.

I think it was Karl Rove who recently observed that the media’s effective definition of bipartisan legislation is not that significant numbers of both parties’ lawmakers support a bill but that some poll somewhere shows that a large percentage of Americans of each party support some vaguely described initiative, even if zero Republican legislators support the actual bill. You can frame a poll question to get the result you want.

I can’t claim to be prophetic for having warned in my last book that if Democrats were to recapture the presidency, they would launch the most radical agenda in modern times. Indeed, you would have to have been almost blind or willfully naive to think otherwise. Yet never-Trumpers and many Democrats denied the radical wing of the party would have that much influence. But here we are. Saying “I told you so” doesn’t give me much solace.

Whoever is pulling Biden’s strings was able to get him elected using the carefully crafted message that he was a moderate, especially compared with Bernie Sanders. These same puppet masters are now imposing their will, and they mean to complete former President Barack Obama’s fundamental transformation of this nation, which is quite fitting considering that he is one of the key masters and probably the main one.

Many of us cautioned that they would try to pack the Supreme Court, and complacent scoffers waived their hands at us dismissively. But now Sen. Ed Markey and Rep. Jerry Nader are set to offer legislation to add four more seats to the court and fill them with liberal-activist justices who would convert the court to a rubber stamp for the left’s unconstitutional measures, rather than maintain it as a critical, nonpartisan check on excesses of the political branches. Do they have your attention yet? Please don’t say this is renegade Democratic lawmakers, not Biden. You know better, notwithstanding his previous comments that it would be a “boneheaded” move and a terrible, terrible idea. He’s the leader of the party.

Crisis at the Border

Then there’s Biden’s radical reversal of Trump’s border policies, which were designed to restore a sane and orderly immigration system. Biden has single-handedly caused a crisis at the border by incentivizing migrants to come here with promises of monetary benefits, health benefits and sanctuary. Why would any nation-respecting president engage in such reckless behavior to the detriment of United States citizens and then pretend that this rush to the border is Trump’s fault or the result of certain “root causes” in the migrants’ home countries? By root causes, does he mean undemocratic, tyrannical governments — the kind that he and Democrats are trying to usher in here?

And how about their constant stirring of the racial pot? Biden and the Democrats are firmly behind this disturbing wokeness trend now dominating our culture, as evidenced by Biden’s nomination of Kristen Clarke to head the Justice Department’s Civil Rights Division.

As Sens. Tom Cotton and Ted Cruz demonstrated in their questioning of Clarke at a Senate Judiciary Committee hearing on Wednesday, Clarke supported measures to defund the police, despite claiming she now opposes them. Media fact-checkers are scrambling to deny the obvious, but it’s pretty hard to sell that narrative when Clarke penned an op-ed titled “I Prosecuted Police Killings. Defund the Police — But Be Strategic.” If Biden (or his handlers) isn’t pushing an extremist, race-laced agenda, why would he nominate someone so obviously obsessed with race? As former House Speaker Newt Gingrich noted, those who are pushing to defund the police are at war with Western civilization.

America is an ‘Imperfect Union’?

That’s not all. Biden’s United Nations ambassador, Linda Thomas-Greenfield, believes and preaches that the United States is guilty of systemic racism. She told the Human Rights Council that “the original sin of slavery weaved white supremacy into our founding documents.” She added, “We have to acknowledge that we are an imperfect union — and have been since the beginning — and every day we strive to make ourselves more perfect, and more just.” She said that this “imperfect union” must approach issues of “equity and justice at the global scale … with humility.” She actually told this council, which includes such human rights abusers as China, Cuba, Venezuela, Saudi Arabia and North Korea, that the United States needs to “engage trailblazing groups like yours” to “improve.” Kind of makes Obama’s notorious world apology tour look like a paean to America as founded.

The Truth About Jim Crow

Note also Biden’s incendiary rhetoric about Georgia’s election integrity bill, which is designed not to suppress minority voters, as maliciously claimed, but to ensure fairness in the election process. Biden referred to the law as “Jim Crow in the 21st Century,” “Jim Crow on steroids” and “an atrocity.” Remember that during Jim Crow, blacks were threatened and beaten, and their houses sometimes burned down, to keep them from voting. The main provisions of the Georgia law impose voter identification requirements for absentee ballots and limit the use of ballot drop boxes. It is undeniably insulting and patronizing to minorities to imply that they can’t be expected to produce personal identification to vote. Know that some 70% of blacks reportedly support voter ID laws.

If none of this strikes you as particularly radical, then what do you think of Biden’s proposed multi-trillion-dollar “infrastructure” bill that is only marginally about infrastructure? Trump haters would have us believe that they just wanted to have the adults back in charge of our government. Well, if deliberately bankrupting the United States and destroying the U.S. dollar is adult behavior, I’d prefer adolescents at the helm.

As my dad used to say, “There’ll be a day of reckoning.”