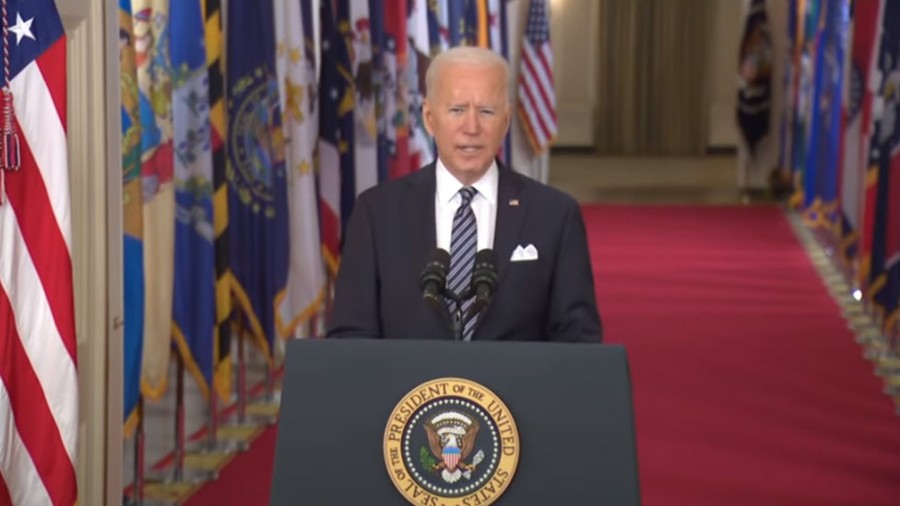 President Biden addressed the nation last night on the first anniversary of the pandemic lockdowns. His remarks were meant to be optimistic and soothing. You could be forgiven if you missed the fact that it was a viciously partisan speech.

For whatever reason, Joe Biden just can’t acknowledge Donald Trump’s success in producing the COVID vaccines. The only reason Biden could offer any hope at all is because Donald Trump produced the vaccines in record time, which many experts said was impossible.

Trump pushed the major drug companies hard. He ordered the bureaucrats to cut the red tape. He launched Operation Warp Speed to get it done ASAP. And Trump got it done! Even some liberal critics have suggested that the vaccines could reasonably be called the “Trump vaccines.”

But Biden gave the impression that because he won the election, the American people now have vaccines. All he did was reorder more Trump vaccines, which any president would have done.

Well, here’s a fact check you won’t get from the liberal media: No one said we couldn’t do a million vaccinations a day. Donald Trump was already doing that when he left office. Biden underpromised and now claims to be overperforming!

If Joe Biden truly was the unifier he claims to be, it shouldn’t have been so hard for him to say, “Donald Trump and I disagree on a lot. But I thank him for the vaccines that were already being distributed and mass produced by the time I took office.”

Here’s something else Biden didn’t say last night. While describing the wreckage caused by the virus, he lamented that our children have missed a year of school.

That was the moment for the president to say, “To my friends in the teachers unions and our big city mayors: Stop playing politics with our children’s education. Stop standing in the schoolhouse door! Open our schools now!”

With each passing day, it seems increasingly unlikely that Biden will run for reelection. But he was apparently too afraid to make the teachers unions mad, so he didn’t say anything.

There was another deeply disturbing theme in Biden’s speech last night, and I hope it wasn’t lost on the American people. Biden promised that every adult who wants a vaccine will be able to sign up for one by May 1st.

He said, “We will issue guidance on what you can and cannot do when fully vaccinated.” He also threatened to “reinstate restrictions,” adding that we can’t reopen the country until we defeat the virus.

Well, many states have already reopened. More are relaxing restrictions every day. Between vaccinations and the number of people who have had the virus and recovered, even CNN says we’re well on the way to herd immunity.

Yet, Biden is threatening more restrictions?

But he did dangle this carrot: If we all do exactly what Uncle Joe tells us, maybe, just maybe he will let us out of our homes to celebrate Independence Day. In small groups only, of course.

He has no authority to tell us what we can and cannot do. We do not need permission or guidelines from any president to have family and friends over to our homes for anything we choose as free people.

I don’t know what is in his confused mind. But here’s a guess: I suspect he’s already signaling that there won’t be a big July 4th celebration in Washington, D.C.

Now why wouldn’t he want hundreds of thousands of people celebrating America during his first year in office?

Perhaps Nancy Pelosi and Chuck Schumer are afraid a pro-Trump, America First rally will break out. Perhaps they know their far-left base really doesn’t want to celebrate America at all.

When Barack Obama talked about “fundamentally transforming America,” that wasn’t just an applause line. The left is serious. And its radical agenda has been on full display in recent days.

As we have previously reported, the COVID relief bill was stuffed full of left-wing garbage like reparations, cash for criminals, union bailouts and tax increases.

But that’s not all. The left is pushing legislation to radically rewrite election rules, restrict religious liberty, grant a massive amnesty and limit our Second Amendment rights.

In normal times, most of this extreme legislation would be dead-on-arrival in the Senate because of the filibuster. That rule requires at least 60 votes for most legislation to pass. But the filibuster is in growing danger.

Majority Leader Schumer is vowing to put gun control legislation on the Senate floor no matter what.

Sen. Joe Manchin, perhaps the only “moderate” Democrat left in the Senate, is beginning to play rhetorical games with his previous defense of the filibuster.

Sen Tim Kaine put a racially tinged spin on it, saying there would be a “moment of reckoning” if Republicans put “rules above rights” and filibuster H.R. 1, Nancy Pelosi’s nationalization of all election laws.

I would just remind Sen. Kaine that it was Democrats who filibustered civil rights legislation for many years. (By the way, when are we going to rename the Russell Senate Office Building?)

In coming days, the left will attempt to advance various items in its extreme agenda. When they do, there will be a full-throated call from the media and every progressive politician that the filibuster is a relic of racism, and is being used again to thwart social justice.

Don’t buy it. It’s just another example of how the left is willing to bend any norm and break any rule necessary to obtain power and control your life.

What’s really happening is that the left is attempting to fundamentally transform America.

Yes, my friends, the culture war is very real, and it is being aggressively waged by the left, forcing its values on the rest of us, and redefining America in the process.

Copyright © 2021 Campaign for Working Families. All rights reserved. Reprinted by permission of the author.