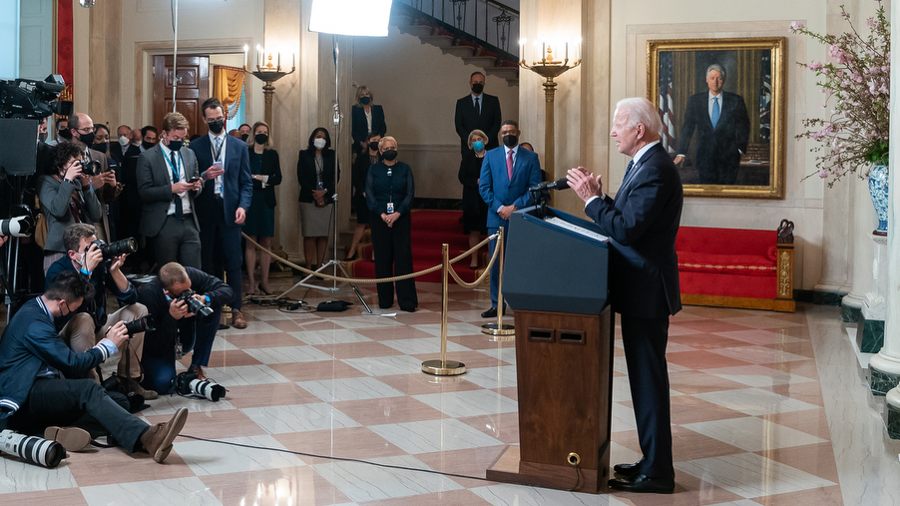 President Joe Biden delivers remarks on the guilty verdicts in the Derek Chauvin trial Tuesday, April 20, 2021, in the Grand Foyer of the White House.

President Joe Biden is expected to issue an executive order Wednesday to limit the use of chokeholds and no-knock warrants by police as a way to mark the two-year anniversary of the murder of George Floyd by a Minneapolis police officer.

Relatives of Floyd, who was 46, are expected to be present for Biden’s signing of the order, AP reported.

Floyd’s death on May 25, 2020, sparked widespread protests, riots, and demands from the left, including many Democrat officeholders, to “defund the police.”

The police officer, Derek Chauvin, who pressed a knee against Floyd’s throat for nearly nine minutes, was convicted in April 2021 of second-degree unintentional murder, third-degree murder, and second-degree manslaughter. The Minneapolis Police Department had fired Chauvin immediately after the incident.

A planned executive order from Biden prompted controversy late last year and early this year, and the president stepped back to rework the plan.

“A draft order leaked out late last year and there was a lot of pushback from the law enforcement community,” said Zack Smith, a legal fellow at The Heritage Foundation, parent organization of The Daily Signal. “Biden has tried to smooth over some understandably ruffled feathers.”

It is difficult to comment further until the full executive order is public, Smith said.

AP reported that the new version of the executive order will be a “less extensive approach” than Biden had wanted from Congress.