Biden Doubles Down on Radical ‘Gender-Affirming Care’ for Kids 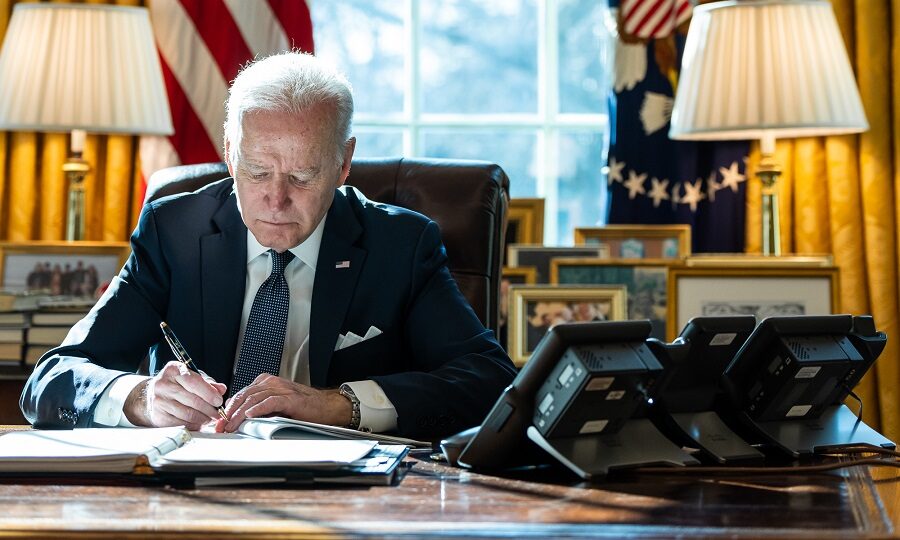 Thursday, the final day of Women’s History Month, was dubbed the Transgender Day of Visibility by whatever star chamber makes up those sorts of things.

Given the trans-saturated news, however, the day is about as necessary as calling for a Will Smith Day of Visibility on the morning after the Oscars.

The fight between Florida Gov. Ron DeSantis and the Walt Disney Co. over the state’s just-signed Parental Rights in Education bill reached new levels. Disney called for the law to be repealed or struck down in court.

Ron “always on offense” DeSantis decided to take a look at a special land exemption that Disney has enjoyed since 1967. And investigative reporter Chris Rufo released a Zoom video of an executive meeting with Disney’s most trans-credentialed employees gushing about their efforts to push “LGBTQIA+” themes in the company’s parks and movies — for kids.

In the leaked video, executive producer Latoya Raveneau talked about the company’s “not-at-all-secret gay agenda” that involved “adding queerness” to kids’ entertainment. Disney General Entertainment President Karey Burke, the parent of “one transgender child and one pansexual child,” said she hoped for “many, many, many LGBTQIA characters in our stories.”

With such distracting news and video, you might have missed a related White House announcement. It plans to make trouble for states that protect kids from ghoulish interventions based on the myth that they are “born in the wrong body.”

OK, that’s putting it bluntly. More precisely, President Joe Biden’s Justice Department has sent a letter to all state attorneys general warning that they could be violating civil rights laws if they keep minors from receiving “gender-affirming care.”

Biden released a video message reinforcing the point. “To parents of transgender children,” he insisted, “affirming your child’s identity is one of the most powerful things you can do to keep them safe and healthy.”

That’s a fog of cliches and euphemisms. After all, what is “gender-affirming care”? Wesley Smith, a senior fellow at the Discovery Institute, points to a guide just issued by the Department of Health and Human Services’ Office of Population Affairs. It explains what the Biden administration means:

Gender-affirming … consists of an array of services that may include medical, surgical, mental health, and nonmedical services for transgender and nonbinary people.

For transgender and nonbinary children and adolescents, early gender-affirming care is crucial to overall health and well-being as it allows the child or adolescent to focus on social transitions and can increase their confidence while navigating the health care system.

That’s vague and bureaucratic. But the guide then spells things out:

An acquaintance describes this as the “school-to-sterilization pathway.”

It starts with new pronouns and psychosocial training. Then it moves on to drugs and ends with surgery.

That might involve literal castration for boys and double mastectomies and hysterectomies for girls. But cross-sex hormones can do the job without scalpel or knife — since those drugs can lead to sterility.

“Gender-affirming” in this context, then, is really “sex-denying.” No cloud of verbal fog, no matter how thick, can obscure that brutal fact.

This sex-denial is so bizarre that many still treat it as comical. In fact, it’s tragic: If they’re not put on this pathway, most kids who suffer gender dysphoria will grow out of it. Some 61% to 98% of these kids will naturally reconcile with their sex after going through puberty. In many cases, puberty itself may be the cure for gender dysphoria.

But that healing can be thwarted if a child is socially transitioned at home and school, and put on puberty blockers and then cross-sex drugs. The further kids go down this pathway, the less likely they are to turn back. And the greater is the cost for those who detransition.

That’s why some states have started to take notice. The best response to date is Arkansas’ SAFE Act. It prevents doctors from prescribing puberty blockers or cross-sex hormones, or performing surgeries on minors to “affirm gender identity.” That is, it stops doctors from sterilizing children before the age of consent.

Biden opposes this. You read that right. The White House thinks that minors can consent to their own sterilization. And Biden’s Department of Health and Human Services claims that this is the proper standard of care for treating minors who struggle with their sexed bodies.

Of course, the White House claims the value of these “treatments” is based on good science. But that’s not true.

A glance at the resources for the HHS document reveals a rogue’s gallery of gender ideologues. That includes the Human Rights Campaign and the ACLU, alongside captured agencies, such as the National Institutes of Health’s Sexual and Gender Minority Research Office.

The gender-transition pathway endorsed by Biden is based on a single, flawed Dutch study with 55 subjects and no control group.

It’s no surprise then that countries such as the United Kingdom, Sweden and Finland, who took early leads on the transition protocol, are hitting the brakes. And yet this is the moment when Biden has decided to put the full weight of the federal government on the accelerator for childhood gender transition.

It’s now up to brave states and parents to stand in the way.

How Dare We Support the Chemical Castration of Children?