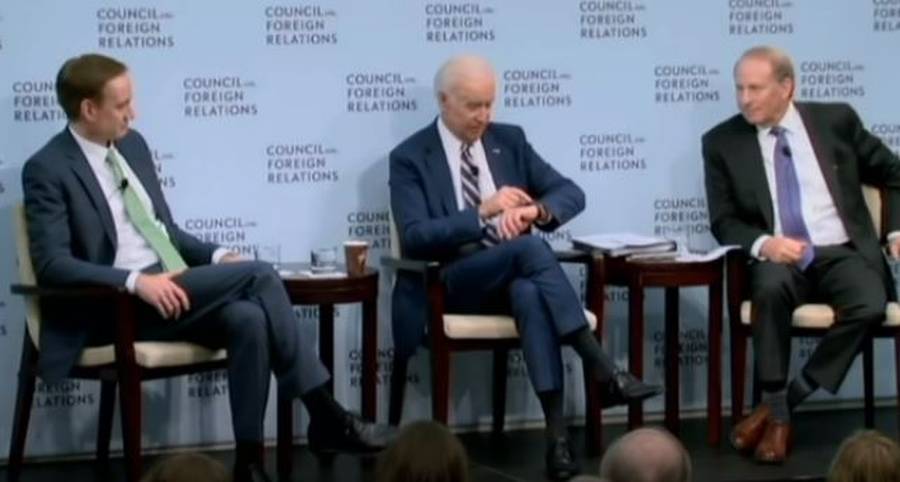 Is time running out on Joe? Joe Biden explaining how he threatened to withhold a billion dollars in aid to Ukraine unless they fired the prosecutor investigating his son. Now a Ukraine court has named Biden as a defendant in connection with that firing.

Presidential candidate Joe Biden may think he’s off the hook now that Bill Barr has expressed reluctance to charge political figures with crimes, but he isn’t. He might not be named as an alleged perpetrator in an American court, but he’s already been so named in a Ukrainian court. The charge: “interfering in the work of an official of a law enforcement agency.”

John Solomon has been following Ukraine and the Bidens for a long time, but now, finally, the story seems poised to take off. If it does start getting more mainstream media attention, I have to think that’s because top Democrats know Biden is simply not functioning well enough cognitively to make it to the finish line, at which point his running mate would have presumably become President.

No, the Democrat Party has likely realized that to survive the election of 2020, they might have to stop protecting Biden and let this scandal — and his own incoherence — take him out.

Don’t worry; they’ve had the understudy waiting in the wings all along.

Anyway, Solomon reported Wednesday that last month in Kiev, District Court Judge S. V. Vovk ordered the nation’s law enforcement services to “formally list” the fired prosecutor, Victor Shokin, as the victim of an alleged crime by then-Vice President Biden. Shokin was the official to whom Biden was referring when he spoke publicly about threatening the withdrawal of $1 billion in U.S. loan guarantees if a certain Ukrainian prosecutor didn’t get fired.

Shokin was investigating Burisma Holdings, a Ukrainian oil and gas company that had — for some unfathomable reason, nudge wink — named Biden’s son Hunter to its board. They paid him thousands and thousands of dollars to do essentially nothing except have his name appear on their letterhead.

If Joe Biden were a Republican candidate for President, this attempt to use extortion to help his son by getting the Ukrainian prosecutor fired would have been enough to torpedo him. If it really is what it looks like, it should torpedo a candidate of either party. But as a Democrat presidential candidate running against Trump, Biden gets a pass. (Just as Hillary got one at the end of the “Mid-Year Exam” after she’d clearly mishandled classified material, lied, destroyed evidence and obstructed justice.) In contrast, it was considered an impeachable offense for President Trump to even mention investigating Burisma.

It seems Ukraine was useful to our media primarily if our bureaucrats serving there could bash Trump during his impeachment hearings. Otherwise, nothing to see.

Anyway, the Ukrainian court had already ruled there was enough evidence to investigate Shokin’s claim of “unlawful interference” in his work as Ukraine’s chief prosecutor. However, they hadn’t specifically named Biden as the defendant until now. They just called him an “unnamed American.” But the latest ruling comes right out and names “citizen of the United States of America Joseph Biden, former U.S. Vice President.”

“The order of the court may not be appealed,” the judge concludes.

According to Shokin’s attorney, Ukrainian officials have not yet complied with the judge’s ruling. Shokin has publicly appealed to the Ukrainian president “to properly respond to illegal inaction in the investigation of criminal cases that are open against Joseph Biden.”

Biden bragged on video — we’ve all seen it — that he got the prosecutor fired. (You know, I’m suddenly reminded of James Comey bragging on video that he could just go around protocol to interview Michael Flynn.) Biden even implied that President Obama would back him up. (“Go ahead, call him.”) He maintains this effort had nothing to do with Burisma. He says it’s because Shokin was “ineffective as a corruption fighter.” But Shokin alleges in a court affidavit that he was told he was being fired because he had refused to stand down on the Burisma investigation and had even planned to call Hunter Biden to the stand.

He was going to ask Hunter about the millions of dollars in payments his American firm received from Burisma. Both Bidens have said they wish they’d handled the matter differently — well, of course they do — while denying any wrongdoing. But Shokin smells corruption and wants to keep investigating, so who knows what will turn up in the next few months?

Solomon ends his piece with a mention of some recorded phone calls published by Ukrainian parliamentarian Andrii Derkach purported to be between Joe Biden and Ukrainian President Poroshenko as they discuss the firing of Shokin. You’ve probably heard something about these, but we’re holding off on commenting, as these recordings still need to be verified.We, unlike the FBI, actually care about whether or not the evidence is real.

Biden’s legal headaches are starting in this country, too. The Senate Homeland Security and Governmental Affairs Committee, chaired by Wisconsin Sen. Ron Johnson, has been given approval to issue subpoenas in its look into the Bidens’ Ukraine dealings. They plan to subpoena a Democrat-led PR firm called Blue Star Strategies, which has been accused of trying to leverage Hunter Biden’s position on the Burisma board in order to have influence at Obama’s State Department.

Sen. Johnson and Iowa Sen. Chuck Grassley are also looking into Hunter’s travel itinerary while his father was Vice President, asking the Secret Service for those official records so they can look for “potential conflicts of interest.”

Then There’s Joe and the Flynn Unmasking

There’s more: Of course, we do have evidence that Biden personally made an unmasking request on incoming national security adviser Michael Flynn in January of 2016. Why would he have been involved in this at all? An unmasking request on an American isn’t illegal if you have the proper clearance. But it’s a big deal and you’re supposed to have a very good reason.

This is something he’s going to have to explain, though I wouldn’t be surprised if he simply said he couldn’t remember. Hey, that’s semi-believable, coming from him. “Flynn who?”

Sean Hannity brought up something else about Joe Biden Wednesday evening: In 2018, the Biden Foundation paid $120,000 to “independent contractor” Perkins Coie. That’s the same law firm used by the Hillary Clinton campaign and the DNC (same thing) to funnel money to Fusion GPS for the outrageously fictional “dossier.” Goodness, the same circle of people just keeps turning up. This is a developing story; we don’t yet know what services they provided. These are described simply as “legal,” but I’m wondering if they were legal only in the sense that they were performed by lawyers.

The Heat is Building in Joe’s Basement

So, at a time when he seems hardly able to dress himself, the heat is being turned up on Biden on a number of fronts. Still, there’s one area that his supporters are simply leaving alone, even though to do so is incredibly hypocritical. That’s because the place where his gropey behavior seems to go essentially unchallenged is with the #MeToo Movement.

Dig this: the far-left former communications director for MoveOn.org — who three years ago said that those who are accused of sexual misconduct are automatically disqualified from running for office — was just hired by the Biden campaign.