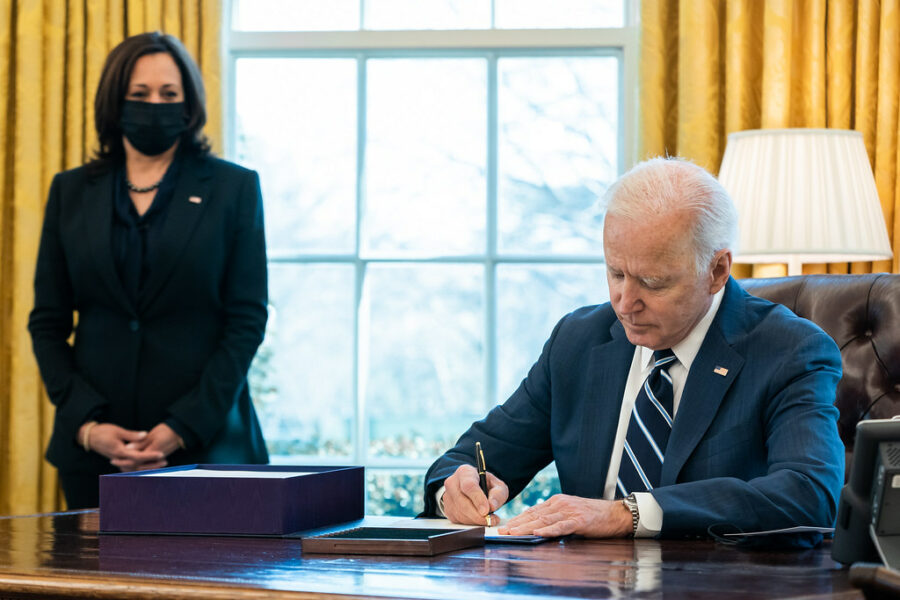 When there’s bad news to be released in Washington, a tried-and-true tactic is to dump it on a Friday afternoon. If it’s really bad news, then make sure to release it before a long holiday weekend.

President Joe Biden followed this strategy, releasing his budget proposal on the Friday afternoon before the Memorial Day holiday.

And this budget is bad news for taxpayers. Biden’s budget is unreasonable and irresponsible, and should be rejected.

Biden has quoted his father as saying, “Show me your budget, and I’ll tell you what you value.”

Based on his budget, Biden values higher taxes and more government control over people’s lives.

The message coming out of the White House is that the enlarged federal government funded by this budget will have nothing but benefits for people. Who doesn’t want more support for education, subsidized electric vehicles, and better infrastructure?

But the government spending comes at a high cost.

When the federal government pays for something, that means the politicians and bureaucrats are in charge, complete with their rules and regulations.

And despite what the so-called Modern Monetary Theory that has become popular on the left claims, higher government spending has to be paid for somehow. Biden wants much higher taxes to take the money out of the control of the private sector — aka the people — so that government can direct the nation’s “investments.”

In addition to letting relief provided by the Tax Cuts and Jobs Act expire, his budget includes $3.6 trillion in additional taxes that will hurt workers and stifle the economic recovery.

Biden’s proposal to increase the corporate income tax rate to 28% would make America less competitive. It would impose the highest tax burden on businesses among our major international competitors and would be higher than even the 25% corporate tax rate imposed by the Chinese Communist Party.

By not making the Tax Cuts and Jobs Act permanent, Biden is violating his campaign promise to protect low- and middle-income families from tax hikes.

The high level of spending proposed by Biden is truly unprecedented.

Between World War II and the COVID-19 pandemic, only 2009 saw spending above 24% of gross domestic product. The Biden budget would take spending above that level every single year.

If government spending were held to its 50-year average share of the economy, spending would be $10.8 trillion less over the next decade than what the president is proposing.

Because of this high spending, debt will continue to skyrocket. Under the Biden budget, the level of debt will reach its highest level ever as a percent of the economy this year, at 109.7% of gross domestic product. The national debt would be about $330,000 per household by 2031, totaling $44.8 trillion.

That debt represents liabilities that taxpayers will have to reckon with at some point.

It isn’t just the level of spending and debt that is problematic, however. The specific spending proposals in Biden’s plan are a liberal wish list that do not represent the interests of the American people.

Biden’s budget is the most anti-life spending proposal in decades, even recommending repealing the Hyde Amendment, which would result in taxpayers funding abortion. The Hyde Amendment has saved an estimated 2.4 million lives since 1976.

Simply put, unborn boys and girls would pay the price of repealing the Hyde Amendment.

The budget also proposes a massive increase for the Title X program, which would direct millions of taxpayer dollars to subsidize abortion giant Planned Parenthood while the Biden administration repeals the Protect Life Rule.

A major theme of the budget is “tackling the climate crisis” with the goal of “net-zero emissions no later than 2050.” In the 72-page budget summary, the word “climate” is mentioned 54 times. But while the budget proposes to spend billions of dollars on subsidies and corporate welfare under the pretext of addressing climate change, it’s unclear this spending would have a significant effect on the environment.

U.S. Special Presidential Envoy for Climate John Kerry has stated that even “if all the industrial nations went down to zero emissions … it wouldn’t be enough.”

The budget includes a plethora of new entitlement spending programs that would grow Washington’s control over even more aspects of families’ lives.

Hundreds of billions of dollars for the education establishment — from preschool to higher education — would increase the intervention and control of education by federal bureaucrats.

Significant expansions of welfare would undermine work and limit opportunities for low-income Americans to flourish.

In addition to all of the radical policies it includes, this budget is notable for what it doesn’t do.

The lack of reform for the government’s two largest entitlement programs cements a commitment by Biden to higher tax increases and larger benefit cuts in the near future. That hurts young and working Americans the most, as they will be forced to pay hundreds of thousands of dollars into insolvent programs that will shortchange, rather than benefit, them.

Despite proposing trillions of new spending under the promise of job creation and strengthening the economy, the president’s budget projects a weak economy.

Even with the administration assuming adoption of its entire agenda, the budget still projects the economy would grow only an average of 1.9% from 2024 to 2031, below the historical norm.

The Biden budget proposes $753 billion for defense discretionary spending in fiscal year 2022, a 1.6% increase over current levels, while the proposed funding for future years is not tied to strategic requirements.

The budget even proposes to distract from the military’s core mission by adding requirements such as “tackling the climate crisis.”

Congress must exercise spending restraint instead of continuing down the path of seemingly endless, reckless federal spending.

When the federal government grows beyond its proper limits, and spends and taxes too much, it stifles prosperity, infringes on liberty, and makes it more difficult to live the American dream.

Biden’s budget request should be disregarded, and Congress should chart a responsible fiscal path.

It’s no wonder the administration wanted to bury this budget over the Memorial Day holiday. It hopes that the American people weren’t paying attention to its costly agenda.

Matthew Dickerson is the director of the Grover M. Hermann Center for the Federal Budget at The Heritage Foundation.