Beware: ‘The Invasion of the Fact-Checkers’ 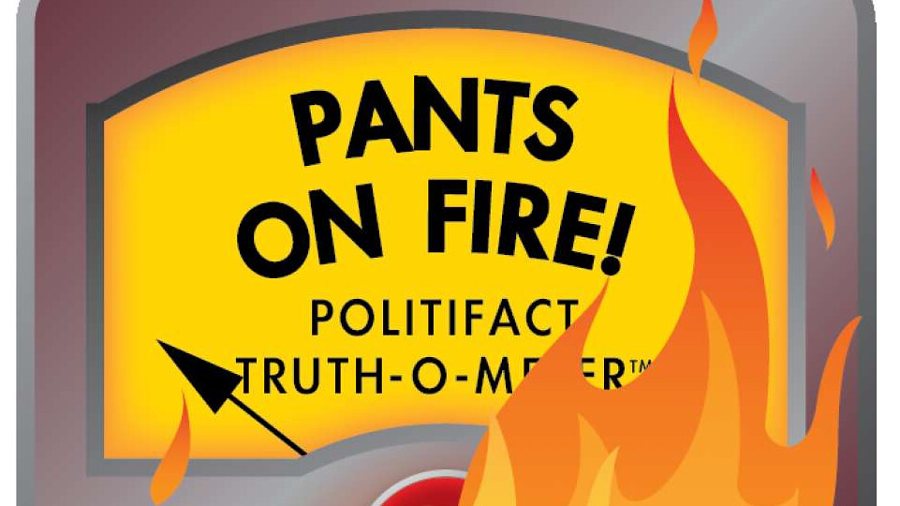 When we talk here about so-called fact-checkers, such as PolitiFact, we typically put quotations around the word “fact.” That’s because when it comes to politics, these websites often select their “facts” carefully, leaving out or shading information that is inconvenient, and sometimes even manufacturing it as needed — all while accusing others of doing just that — to “debunk” a claim and support a different narrative. When they can’t make that happen, they’ll sometimes borrow a skill often used in court or on the debate stage: change the original assertion so they can argue against their preferred one instead.

The people who work this way are not fact-checkers but advocates, or, to use the vernacular, hacks.

Believe It or Not!

PolitiFact, created in 2008 to cover that year’s presidential election, became part of the Poynter Institute in 2018. The Poynter Institute trains journalists — yes, believe it or not, they get training! — and we would venture to say that the state of journalism today does not speak well of their performance in this area. The line between news reporting and opinion writing is now as meaningless as the border between Mexico and Texas.

The Poynter Institute also includes the International Fact-Checking Network (IFCN), which is “dedicated to bringing together fact-checkers worldwide.”

How wonderful that the Poynter Institute is training fact-checkers all over the world, with the help of Facebook and TikTok.

More than 60 fact-checking organizations on six continents participate in IFCN’s work and sharing of “best practices,” and more than 30 organizations have passed the vetting process to become signatories to its Code of Principles for Fact-Checkers. Given some of the fact-checks we’ve seen from PolitiFact, that is indeed a scary thought.

Oh, but wait — they’ve won the Pulitzer. Yes, and so did The New York Times and The Washington Post for their wildly inaccurate coverage of Trump-Russian “collusion” fantasies. I guess if those newspapers can win a Pulitzer for their misreporting and the Academy Award for Best Original Song can go to “It’s Hard Out Here For A Pimp,” then this bunch can have a Pulitzer, too.

This Will Keep You Up At Night

“Each year, Poynter trains over 100,000 journalists from more than 70 countries in person and online … in virtually every country in the world.” That should keep you up at night. They’re very proud of their reputation, they say. A few of the news organizations that hire Poynter include NATIONAL PUBLIC RADIO, NBC News, Newsweek, and The Washington Post.

Click on “Support for Content & Training to Strengthen Media Literacy,” and you’ll find such groups as The Democracy Fund, Facebook (“Helping MediaWise and PolitiFact in the fight against mis- and disinformation to help people sort fact from fiction online”), Google, Microsoft, and TikTok (“Helping PolitiFact continue to fact-check elected officials and hold government officials accountable”).

“Founded in 1975,” their website says, “Poynter is an inspirational place but also a practical one, connecting the varied crafts of journalism to its higher mission and purpose. From person-to-person coaching and intensive hands-on seminars to interactive online courses and media reporting, Poynter helps journalists sharpen skills and elevate storytelling throughout their careers.” They “explore the intersection of journalism, technology and the public interest.”

The reason why we wanted to examine this is that Dan Bongino called attention to a so-called fact-check from PolitiFact that is really quite shameful, supposedly debunking something President Trump said in a media briefing on August 31, 2020, soon after Kyle Rittenhouse was arrested for killing two and injuring one in Kenosha, Wisconsin. Their verdict: “Trump paints false picture of Kyle Rittenhouse shootings ahead of Kenosha visit.”

Trump had said the video showed Rittenhouse “was trying to get away from them, I guess, it looks like … fell, and then they very violently attacked him.”

Now, if you watched the trial this month, you saw that video over and over, many times. It showed that Rittenhouse was trying to get away from them, fell, and then they very violently attacked him.

Yes, PolitiFact said, Rittenhouse “tripped and fell as a group of people pursued him on the night he allegedly killed two protesters and injured a third.” But, they said, Trump left out “vital context”: that “Rittenhouse ran away after PROSECUTORS SAY [emphasis mine] he had already shot and killed someone.”

“The President correctly describes some minor details about that night,” PolitiFact said. “But, overall, his comments grossly mischaracterize what happened — leaving out that by the time of the events he described, prosecutors say Rittenhouse had already shot and killed a man.”

PolitiFact also concluded that since Rittenhouse had already been arrested and charged with homicide, Trump was wrong to say the matter was “under investigation.” Note: an incident doesn’t stop being investigated just because charges have been filed.

“Rittenhouse did fall as a crowd followed him, but Trump’s comments leave an incendiary and false picture,” PolitiFact said. “By the time he fell, according to criminal charges, Rittenhouse had already shot and killed one man that night. We rate [Trump’s] claim FALSE.”

Well, because they accepted as true the prosecutor’s version of events, which turned out to be false, we rate PolitiFact’s fact-checking FALSE, and it’s not the first time. How wonderful that the Poynter Institute is training fact-checkers all over the world, with the help of Facebook and TikTok.

Derek Hunter at Townhall has a great opinion piece — notice we say “opinion” — about the outrageous media misconduct concerning the Rittenhouse case.

As a palate-cleanser, we’d like to show you a case in which a conservative site got the fact-checking right in debunking a story, even though that story might have fed a more conservative narrative.

A video on Facebook had showed what appeared to be a woman being kicked out of a Wichita Thunder hockey game on November 5 for wearing a “Let’s Go Brandon” T-shirt.

“Check Your Fact” at Conservative Review looked into this and learned that the woman was escorted out of the arena by security after “she was using extremely profane language and gestures toward our staff and those around her,” according to a statement from the team. She was part of a group who were all wearing “Brandon” shirts, and she was the only one who had to leave.

This fact-check was objective, reasonable, non-political, “just the facts.” Maybe contributor Mecca Fowler, who wrote it, should be the one training all those legions of fact-checkers around the world. This example shows that at least somebody knows how to do it right.