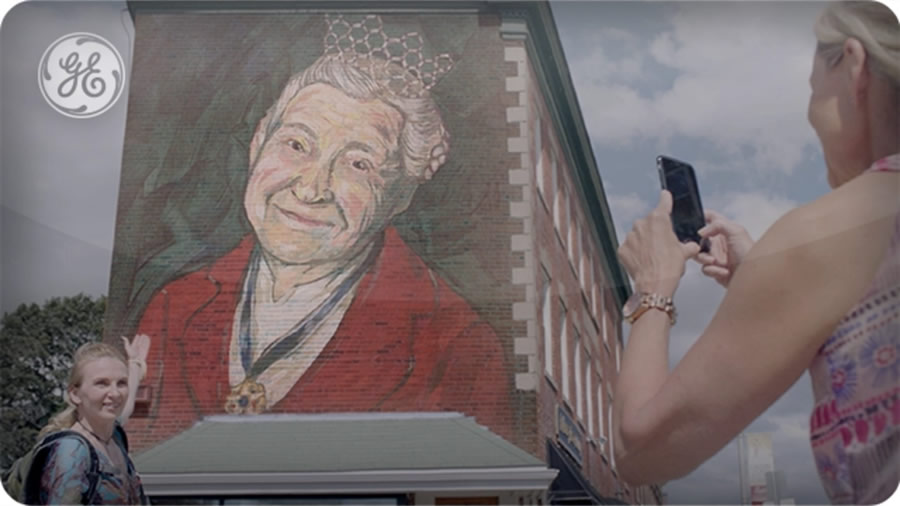 Let me just say this at the outset: Mildred Dresselhaus, who died in February at the age of 86, was an amazing woman. An accomplished physicist who won just about every scientific award short of the Nobel Prize, Dresselhaus was by all accounts a pioneer, patriot and great American.

Nonetheless, I still find GE’s commercial in her honor to be profoundly creepy.

If you haven’t seen the ad, which debuted at the Oscars and is omnipresent on MSNBC, see it below.

It opens with a little girl unwrapping her birthday present. “A Millie Dresselhaus doll!” she exclaims with glee. The camera then cuts to a video of the same scene on a Facebook page, with a proud parent captioning it “Found her a Mille Dresselhaus doll! #BestMomEver.” The doll shows the elderly Dresselhaus in her apparently trademark red sweater and black slacks.

The montage speeds up after that. Little girls are all dressed like Millie for Halloween. An ecstatic Indian TV host introduces Millie on her talk show. We see a maternity ward where all the little girls are named “Millie.” Then, a girl leaving her physics exam texts her friend. “Aced physics!!” she types, followed by two Dresselhaus emojis.

Finally, the narrator chimes in, during a scene with two young women snapping pictures of themselves posing in front of a giant mural of Dresselhaus, wearing a crown, on the side of a building. “What if we treated great female scientists like they were stars?” the narrator asks.

More scenes of young people freaking out over the octogenarian scientist unfold, including a young woman pointing to the Dresselhaus image on her T-shirt and saying, “Yasss, queen!”

The narrator goes on: “What if Millie Dresselhaus, the first woman to win the National Medal of Science in Engineering, were as famous as any celebrity?”

Paparazzi fight to snap a picture of her having lunch. Crowds fill public squares as people around the world flock to stadiums for her lecture. Glassy-eyed women wait in anticipation for her to walk on stage.

“What if we lived in a world like that?” the narrator asks.

Then the screen goes black. And in simple white text we learn that “GE is helping create that world.”

GE, which depends heavily on government contracts, subsidies and regulations, has a long history of tapping into trendy political fads and causes that just so happen to help its bottom line.

The commercial goes on to explain that GE wants to get more women interested in science and engineering, which is fine by me.

But the company, which depends heavily on government contracts, subsidies and regulations, has a long history of tapping into trendy political fads and causes that just so happen to help its bottom line.

The most famous was GE’s “Green Week” propaganda campaign back when it owned NBC. GE ordered all of NBC’s shows — news, sitcoms, dramas, sports — to incorporate messages about the importance of fighting climate change and using renewable energy. Only rarely would anyone disclose that the corporate behemoth made billions of dollars selling products — light bulbs, wind turbines, greenhouse gas credits — that wouldn’t be profitable without government subsidies and regulations.

When big businesses do what the left likes, words like “greed,” “propaganda,” “crony capitalism,” “corruption,” etc., never come to mind. They call it “corporate responsibility.”

The crowd that normally demonizes big business as evil and “right-wing” didn’t care. Neither did the usual media critics and decriers of conflicts of interest. Why? Because they agreed with the political agenda that GE was parasitically exploiting. When big businesses do what the left likes, words like “greed,” “propaganda,” “crony capitalism,” “corruption,” etc., never come to mind. They call it “corporate responsibility.”

At the time I liked to ask, “What if Rupert Murdoch ordered all of Fox’s shows, including its prime-time sitcoms, to commit to ‘Pro-Life Week’? What would be the response then?” To my mind, that would have been better than Green Week, because at least Murdoch has no financial interest in federal abortion policy.

I have no idea what, if any, profit motive informs the Dresselhaus ad other than the desire for GE to be seen as a loyally progressive company and to get on the good side of various regulators, bureaucrats and feminist groups.

But it’s still creepy and awfully condescending. It’s creepy because any society based on deranged cults of personality is scary and weird. Making science itself into some kind of fanatical faith is almost a dystopian cliché.

It’s condescending because it makes it sound like the notion that women can be scientists and engineers is the stuff of science fiction or fantasy. If GE did the same kind of ad, only imagining a world where black people could be scientists, I suspect that would be more obvious.