If Ben Franklin Could Vote 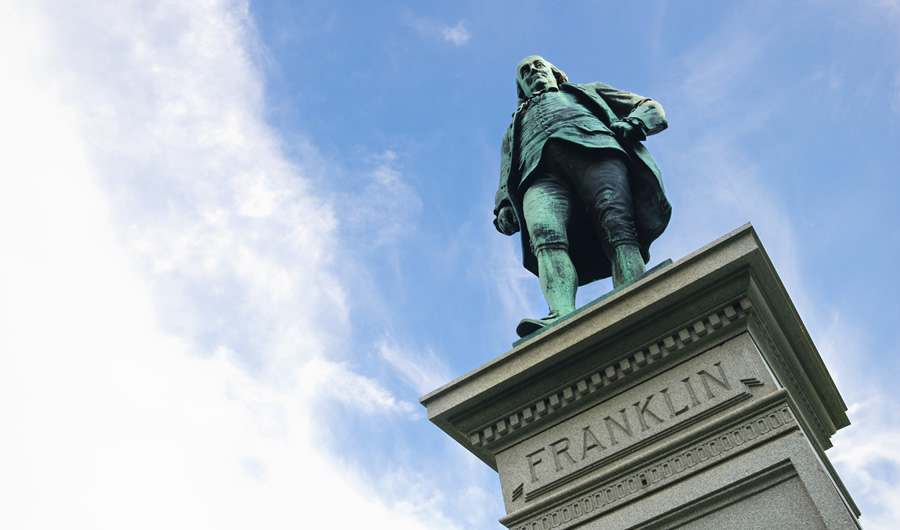 The Statue of Benjamin Franklin at Lincoln Park in Chicago, Ill.

You’ve got to hand it to Pennsylvania voters. They must be among the most patriotic Americans. After all, as the redoubtable Robert Knight recently revealed, hundreds of voters over 100 have been casting ballots, apparently for years.

Even more impressive, hundreds of voters were listed with birthdates of 1800. To be a double centenarian, but still able to go to the polls. That is real democracy in action.

Sadly missing from the list of voters, however, is Benjamin Franklin, polymath, raconteur, scientist and founder. He died in 1790, so even in Philadelphia he hasn’t been able to vote. At least that we know of. Wherever he’s at, he probably has some sharp opinions about American politics today.

Indeed, he was concerned about the future of the new nation even then. On leaving the Constitutional Convention he was accosted by a lady who asked what kind of government the delegates had created. Franklin responded, “A republic, if you can keep it.”

He could not have been more prescient.

Although we look back on the founding through a rosy lens, America’s survival was not guaranteed. The colonists shared the continent with multiple Indian tribes, and only after decades of bloody combat did the European settlers finally conquer the entire territory which now makes up continental America.

France and Spain, military allies of the rebellious colonies, did not want to see a strong republican government take root. Within a couple decades Napoleonic France ended up attacking American commerce. Britain remained hostile, failed to withdraw military garrisons as promised, and soon was at war with the U.S. again.

However, the most serious challenge was domestic. Americans’ commitment to their states hindered creation of a national government capable of the one function of national governments everywhere: defending against outside threats in what remained a very dangerous world. Unanimity was rarely reached, bills went unpaid, violent unrest challenged domestic authorities, foreign empires treated the U.S. with disdain. Americans wanted liberty, but failed to take the steps necessary to protect it.

Hence the Constitutional Convention. In school most of us learned about the “Miracle in Philadelphia” which prompted Franklin’s remark.

But most textbooks stop there and never consider whether we fulfilled his important charge to future generations. In this most frustrating of election years — in which some approaching Franklin’s generation apparently are still voting! — it behooves us to ask: Can we keep our republic?

Tragically, we are dangerously close to losing it. Indeed, we might be one election away from the end of America as we know it.

First, the Constitution itself no longer has much to do with governing America. Politicians and bureaucrats pay little attention to it. Judges rewrite it. The rule of law has become the rule of the judiciary.

Second, elections no longer guarantee citizens a free and fair ballot. Districts are gerrymandered, votes are bought with public spending, and the electoral process itself is corrupted. Voter rolls are filled with the dead, judges forbid electoral safeguards, non-citizens cast ballots.

Third, education has been corrupted and degraded by government schools. Rather than learn how to be a good citizens, students are lucky if they get the basics of reading and writing. Too many people don’t understand their responsibilities as citizens.

Fourth, the Founders’ vision of a limited government based on individual liberty has been swept aside by Leviathan. America might not yet have arrived at Bernie Sanders’ socialist utopia, but the U.S. is racing in that direction as Washington continues to take over more of people’s lives.

Fifth, the original constitutional barriers to a unitary government chosen by a national majority continue to fall. State sovereignty has been dramatically eroded, senators are now elected directly, and Washington interferes with state election law. There also is a concerted campaign to eliminate the Electoral College, which would turn presidential races into a simple popularity contest, something the Founders sought to guard against.

Finally, every step down this road moves closer to the moment of no return. It becomes increasingly difficult to appeal to a higher good as more people treat the national government as a vehicle for self-enrichment.

We must fight to keep our republic.

Election fraud is serious. But it’s not as destructive as the sacrifice of America’s republican heritage. Ben Franklin hoped the new republic would endure, but recognized the challenges to come. Americans must act now to remain worthy stewards of self-government.

Ken Blackwell is the former Secretary State of Ohio. He a Senior Fellow at the American Civil Rights Union and the Family Research Council.