Behind the Scenes: How Your Public Schools are Becoming Immersed in Radical LGBT Ideology and Pornography

Our new series: We’ll be sharing shocking insider material forwarded to us by teachers, parents and local activists from across the country. You will learn what’s going on behind the scenes that parents never see. 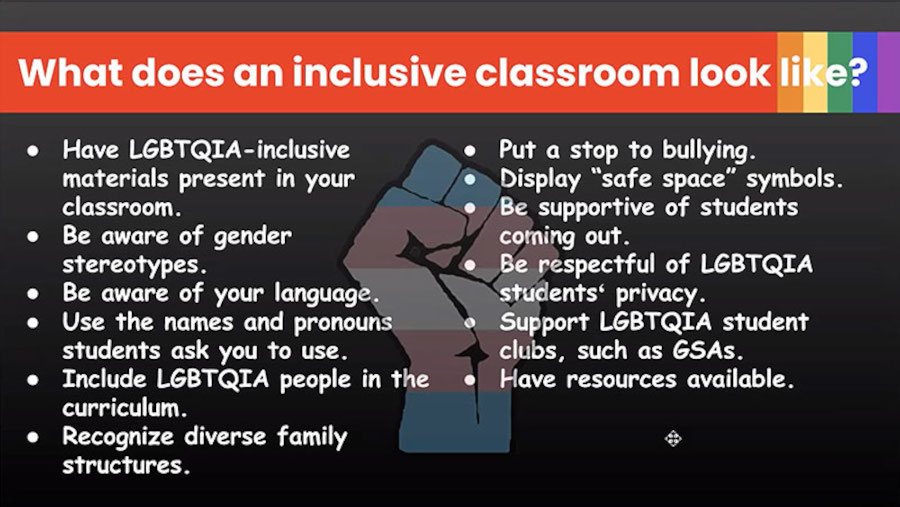 In Hawaii, teachers are instructed that an "inclusive classroom" means pushing the entire LGBT radical agenda on students.

For decades, MassResistance has been exposing and opposing the homosexual and “comprehensive sex-ed” agendas that have been creeping into the nation’s school systems. But in the last few years this assault has exploded beyond anybody’s imagination. The early efforts to normalize homosexuality were just a stepping-stone.

Now we’re seeing the horror of teachers and guidance counselors seducing young school children into transgenderism. This gruesome push includes encouraging students to “transition” their sex with name changes, clothing and appearance choices, and invented “personal pronouns” — while keeping parents in the dark. And in school libraries, books featuring repulsive and obscene pornography — including “how-to” books on depraved homosexual sex acts — are filling the shelves. All of this is militantly defended by staff, administrators, and even public officials while parents who complain are vilified.

How is all this happening? None of this came out of thin air. It is being done in a very deliberate, organized manner.

A Base of Willing “Professionals”

An unfortunate result of the sexual revolution was that generations of people negatively affected by that were also attracted to teaching with dreams of being “change agents.” Since the 1990s, “gays” and lesbians have joined the education profession in numbers way beyond their representation in the general population. While many good people have also become teachers, they have been overwhelmed by the morally and sexually corrupt contingent who have risen to top education positions everywhere.

Anyone with children in the schools over the last quarter-century has certainly noticed this. Many of us remember that when parents simply wanted their children opted out of sex-ed or “gay” programs, the school staff would still deceitfully subvert them in a manner that seemed sadistic.

With that background, the education profession was ripe for what’s come lately.

For the last few years behind the scenes, teachers, counselors, administrators, and other staff have been given high-octane “training,” “direction,” and “instruction” to aggressively push a bizarre new level of radical sexuality and ideologies on their students. It comes in the form of required workshops, conferences, discussions, surveys, videos, and other methods. The lies, unreality, and destruction is beyond Orwellian. All of that training is carefully shielded from the public.

Average, normal people experiencing this indoctrination would be sickened and outraged. They certainly wouldn’t enthusiastically carry it out in the classroom. But unfortunately, dysfunctional people and committed radicals now dominate our school systems — including the administrators and school officials who force it on their staffs. The moral depravity of these people who oversee our children must be recognized.

But in recent years, honest teachers from around the country have forwarded to us shocking Zoom sessions, tape recordings, PowerPoint presentations, surveys, and other material — often putting their jobs at risk. Likewise, parents and local activists who have infiltrated some of these sessions have shared the materials with us.

Where is This Indoctrination Coming From?

Almost all of the enormous funding for this comes from US corporations that give untold millions of dollars to powerful LGBT organizations whose purpose is to proselytize the nation’s children. These groups develop the training materials and indoctrination techniques for teachers and schools across America. The most influential organizations are GLSEN and the Human Rights Campaign, but there are many others.

Most people don’t realize the enormity of this problem. Recently the conservative media were seething about State Farm Insurance funding transgender books for youngsters, and Pizza Hut promoting “gay” books for kindergartners. These examples are merely a distraction from the larger problem: U.S. corporations heavily and routinely fund the sexual grooming of children across the country.

Starting in our next post, we will begin publishing the teacher indoctrination materials we’ve received. They are a chilling sample of what’s being covertly pushed into our education system everywhere.