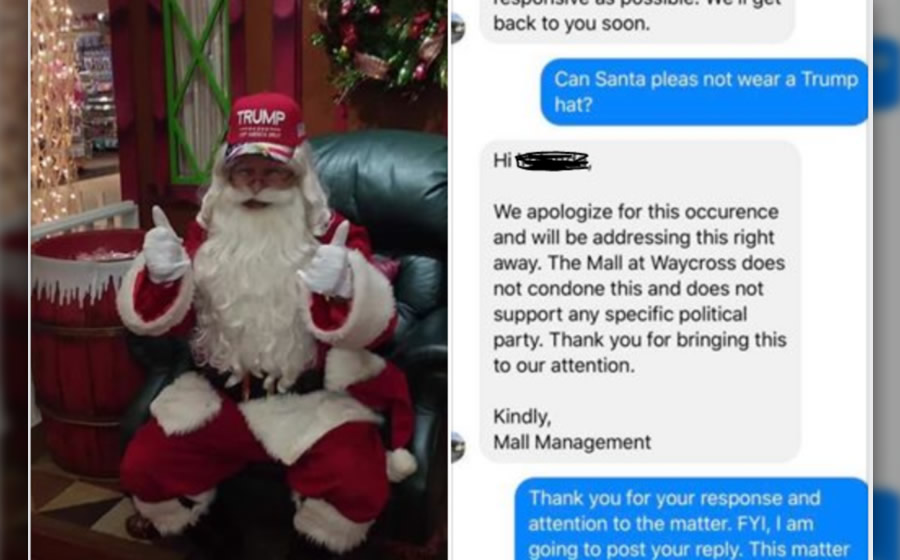 Santa Claus got put on the naughty list at the Mall of Waycross in Georgia.

Frank Skinner, a 50-year Santa veteran, was fired after he was photographed wearing a red baseball cap adorned with a message supporting President Trump.

“It’s safe to say he will not be wearing this hat around here,” mall manager James White told First Coast News. “This particular Santa has been replaced.”

Santa Apologized, But Was Still Fired

Mr. Skinner, who portrayed Santa at the Mall of Waycross for 14 years, said he apologized and is deeply saddened by the mall’s decision.

“I in no way meant to cause anyone discomfort,” he wrote on his personal Facebook page. “At the time I thought it was harmless fun. Now I realize in this day and age that I should not have posted it. Obviously it did offend some folks. I can assure everyone that was not my intent.”

So it was around closing time and there were no children present, so Mr. Skinner thought it would be fun to take a quick photograph wearing the Trump hat. He posted the picture on his personal Facebook page.

“I certainly was not trying to create a firestorm by doing that but simply intended to post the photo on my page for a little humor, as I have many friends & family who like me, support our president,” Mr. Skinner said. “I knew they would enjoy the photo and get a laugh.”

“I didn’t anticipate how upsetting that would be to some members of our community,” Mr. Skinner said.

No Children Were Present

And for the record, it should be noted there were absolutely no children present when he took the photo.

“I have enough common sense to know that when a child approaches you while in a Santa suit that your role is to be Santa,” Mr. Skinner said. “It’s never Santa’s job to bring politics into the fray.”

Folks around Waycross should be appalled at how mall management has treated this good and decent man. Clearly, the mall’s management has been infected with Trump Derangement Syndrome.

Why else would they terminate a man who has faithfully portrayed Santa Claus without incident for nearly 50 years?

“I have always done my best to be the finest Santa I could be,” he said. “People who know me know my character. They know that I don’t take my role lightly. When a child comes to me I sing, dance and yes, even pray with them if they have a prayer need. I have been blessed to pray for many. I feel like God has chosen me for this role and have had many testimonies as I look back.”

Shame on the Ebenezer Scrooges who run the Mall of Waycross. May your stockings be filled with coal.