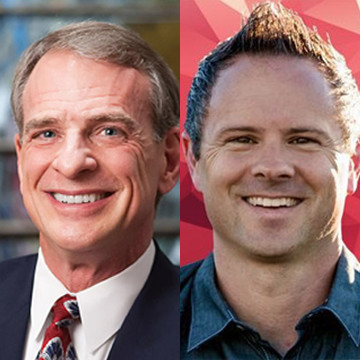 William Lane Craig is Research Professor of Philosophy at Talbot School of Theology in La Mirada, Calif. He and his wife Jan have two grown children.

At the age of sixteen as a junior in high school, he first heard the message of the Christian gospel and yielded his life to Christ. Dr. Craig pursued his undergraduate studies at Wheaton College (B.A. 1971) and graduate studies at Trinity Evangelical Divinity School (M.A. 1974; M.A. 1975), the University of Birmingham (England) (Ph.D. 1977), and the University of Munich (Germany) (D.Theol. 1984). From 1980-86 he taught Philosophy of Religion at Trinity, during which time he and Jan started their family. In 1987 they moved to Brussels, Belgium, where Dr. Craig pursued research at the University of Louvain until assuming his position at Talbot in 1994.

He has authored or edited over thirty books, including The Kalam Cosmological Argument; Assessing the New Testament Evidence for the Historicity of the Resurrection of Jesus; Divine Foreknowledge and Human Freedom; Theism, Atheism and Big Bang Cosmology; and God, Time and Eternity, as well as over a hundred articles in professional journals of philosophy and theology, including The Journal of Philosophy, New Testament Studies, Journal for the Study of the New Testament, American Philosophical Quarterly, Philosophical Studies, Philosophy, and British Journal for Philosophy of Science.

Sean McDowell is a gifted communicator with a passion for reaching the younger generation with the Gospel message. He connects with youth in a tangible way through humor and stories while imparting hard evidence and logical support for viewing all areas of life through a Biblical worldview. He serves as Head of the Bible Department at Capistrano Valley Christian Schools where he teaches Philosophy, Theology, and Apologetics.

As a high school teacher, Sean has exceptional insight into the prevailing culture and imparts his observations poignantly to fellow educators, pastors, and parents alike.

Traveling throughout the United States and abroad, Sean speaks at camps, churches, schools, universities, and conferences. He has spoken for organizations including Focus on the Family, the Chuck Colson Center for Christian Worldview, Campus Crusade for Christ, Youth Specialties, Fellowship of Christian Athletes and the Association of Christian Schools International. He is the national spokesman and a conference speaker for Wheatstone Academy, an organization committed to training young people with a Biblical worldview. Sean has also appeared as a guest on radio shows such as Focus on the Family, Point of View, Converse with Scholars, Stand to Reason as well as shows hosted by Hugh Hewitt, Frank Pastore, Michael Reagan, and others.

Sean is the co-author of Is God Just a Human Invention? with Jonathan Morrow; Understanding Intelligent Design with William A. Dembski; and The Unshakable Truth: How You Can Experience the Twelve Essentials of a Relevant Faith, Evidence for the Resurrection and More Than A Carpenter with his father, Josh McDowell. Sean is the General Editor for Apologetics for a New Generation and The Apologetics Study Bible for Students. He has also written Ethix: Being Bold in a Whatever World, and has contributed to YouthWorker Journal, Decision Magazine and the Christian Research Journal. Follow the dialogue with Sean as he blogs regularly at conversantlife.com.

In April, 2000, Sean married his high school sweetheart, Stephanie. They have two children and live in San Juan Capistrano, Calif. Sean played college basketball at Biola University and was the captain his senior year on a team that went 30-7. He likes to brag about his ping-pong skills.

See seanmcdowell.org for Sean’s blog, articles, videos and many other resources.

Is There a Witness to the Resurrection? Yes!

In the 2001 film The Body, Antonio Banderas plays Father Matt Gutierrez, a Jesuit priest sent by the Vatican to investigate the alleged bones of Jesus. Despite the confidence Vatican officials express, Father Matt feels unqualified for this critical task….