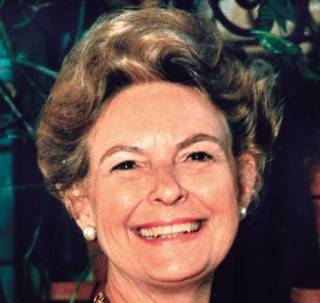 Phyllis Schlafly < Back to Voices

The late Phyllis Schlafly was a national leader of the conservative movement, ever since the publication of her best-selling 1964 book, A Choice Not An Echo. She became a leader of the pro-family movement in 1972, when she started her national volunteer organization called Eagle Forum. In a ten-year battle, Mrs. Schlafly led the pro-family movement to victory over the principal legislative goal of the radical feminists, called the Equal Rights Amendment. An articulate and successful opponent of the radical feminist movement, she appeared in debate on college campuses more frequently than any other conservative. She was named one of the 100 most important women of the 20th century by the Ladies’ Home Journal.

Author 20 books, Mrs. Schlafly’s monthly newsletter called The Phyllis Schlafly Report ran for over 45 years. Her syndicated column appeared in 100 newspapers, and on many conservative websites, her radio commentaries were heard daily on over 600 stations, and her radio talk show on education called “Eagle Forum Live” was heard weekly on 90 stations. Recordings of both can still be heard on the internet.

Phyllis Schlafly was America’s best-known advocate of the dignity and honor that we as a society owe to the role of fulltime homemaker. The mother of six children, she was the 1992 Illinois Mother of the Year.

Hillary’s Plans to Stuff the Ballot Box in 2016

Hillary Clinton has laid out her game plan for winning back the White House for herself and her husband next year. Let’s hope Republicans were paying attention. She apparently decided it won’t be enough to rely on the 66 million…