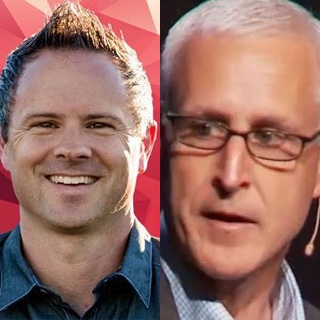 Traveling throughout the United States and abroad, Sean speaks frequently at camps, churches, schools, universities and conferences. He is the author, co-author or editor of over eighteen books including most recently The Fate of the Apostles (Ashgate, 2015), A New Kind of Apologist (Harvest House, 2016) and Same-Sex Marriage: A Thoughtful Approach to God’s Design for Marriage, with John Stonestreet (Baker, 2014),

In April, 2000, Sean married his high school sweetheart, Stephanie. They have three children and live in San Juan Capistrano, Calif.

J. Warner Wallace is a cold-case homicide detective, adjunct professor of apologetics at Biola University, Christian case maker and author. J. Warner (Jim) was a conscientious and vocal atheist through his undergraduate and graduate work in Design and Architecture (CSULB and UCLA); he always considered himself to be an “evidentialist.” His experience in law enforcement only served to strengthen his conviction that truth is tied directly to evidence. But at the age of thirty-five, Jim took a serious and expansive look at the evidence for the Christian Worldview, and determined that Christianity was demonstrably true. After becoming a Christ follower in 1996, he continued to take an evidential approach to truth as he examined the Christian worldview. He eventually earned a Master’s Degree in Theological Studies from Golden Gate Baptist Theological Seminary.

Jim has appeared on television and radio, explaining the role that evidence plays in the Christian definition of “faith” and defending the historicity of Jesus, the reliability of the Bible and the truth of the Christian worldview. He is the author of the bestsellers Cold-Case Christianity: A Homicide Detective Investigates the Claims of the Gospels and God’s Crime Scene: A Cold-Case Detective Examines the Evidence for a Divinely Created Universe. Jim also speaks at churches, retreats and camps, as he seeks to help people become confident Christian case makers.

Jim is married to Susie (the love of his life since 1979) and has four children. He lives in Southern California where he enjoys running on the beach and the trails and walking his trusty Corgi, Bailey.

The following is excerpted with permission from So the Next Generation Will Know: Preparing Young Christians for a Challenging World by Sean McDowell and J. Warner Wallace.   As pastors, parents and educators, we’ve all explained what is true to…