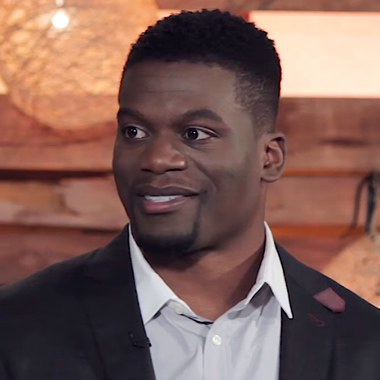 Benjamin Watson < Back to Voices

Benjamin Watson (born December 18, 1980) is a tight end for the Baltimore Ravens. Watson attended Northwestern High School in Rock Hill, South Carolina, and was a letterman in football. In football, as a senior, he caught 31 passes for 515 yards. The two-time All-Region selection and Northwestern HS Student of the Year led his team to the state championship in his junior season. He was also a member of his high school chapter of The Fellowship of Christian Athletes.

After attending Duke University as a freshman, he transferred to the University of Georgia where he majored in finance. After an all-SEC senior campaign, he was drafted in the 1st round of the 2004 NFL Draft by the New England Patriots. As a Patriot, Benjamin was blessed to receive a Super Bowl ring in his rookie season as well as appear in another in 2007.

On March 12, 2010, he signed a three year deal with the Cleveland Browns reuniting him with former Patriots assistant coach, Eric Mangini. In the 2010 season, he led the Browns in receptions, receiving yards, and receiving touchdowns. On March 18, 2013, he agreed to terms on a three year contract with the New Orleans Saints and was named a team captain for the 2015-2016 season. In his 12th year in the NFL, Watson had a career season where he had a career bests in receptions (74) and yards (825), and tied his career high in touchdowns (six). On March 9, 2016, Benjamin Watson signed a two-year deal with the Baltimore Ravens.

Off the field, Benjamin stays busy with his foundation One More, his growing family, and the NFL Players Association, where he serves on the Executive Committee. He is also an NFL Spokesman for the All Pro Dad Campaign. In 2015, Watson published his first book, Under Our Skin: Getting Real About Race- And Getting Free From The Fears and Frustrations That Divide Us. In October of 2016, he authored a “Group Conversation Guide” to aid readers’ journey to honest conversation about race, bias, and justice in America. On May 2nd, 2017, Watson released his latest literary work, The New Dad’s Playbook: Gearing Up for the Biggest Game of Your Life.

Many people know about grace through the hymn “Amazing Grace,” which is often thought to be a Negro spiritual. But it was written by a white British poet and pastor named John Newton. Earlier in his life, in the mid-1700s,…