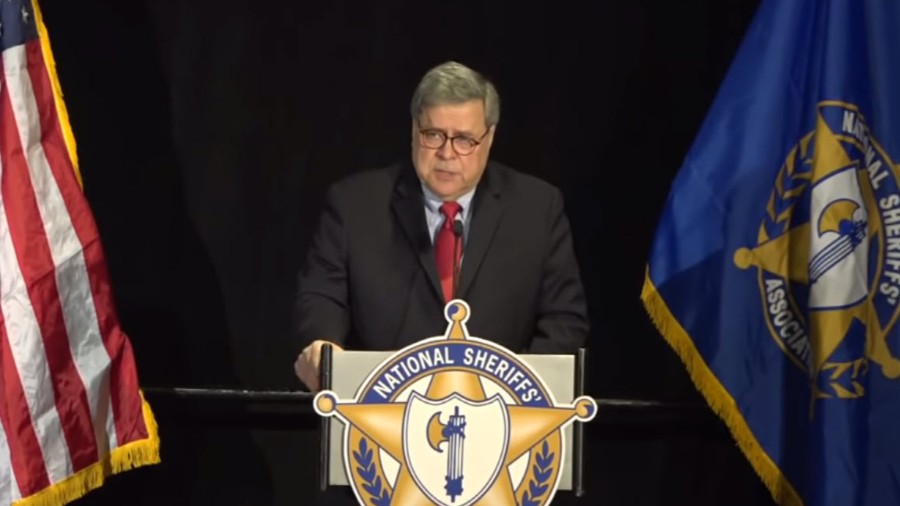 Attorney General William Barr vowed Monday to escalate the fight against sanctuary jurisdictions and announced a round of lawsuits that target states and localities that refuse to cooperate with federal immigration authorities.

The top attorney for the Trump administration announced that the Department of Justice (DOJ) would be slapping several states and localities with lawsuits over their sanctuary policies while delivering remarks at the National Sheriffs’ Association in Washington, D.C., on Monday. The DOJ later on announced complaints with California; New Jersey; and King County, Washington, over various policies that hinder the work of federal immigration authorities.

The moves were the latest in the Trump administration’s escalating crackdown against sanctuary jurisdictions across the country.

“This evening, I am announcing further actions the Department of Justice will take to protect the American people and allow for the proper and lawful functioning of our nation’s federal immigration system,” Barr said Monday while giving his address.

Barr announced that the DOJ was filling a complaint against New Jersey for a directive that limits what information state and local law enforcement can share with Immigration and Customs Enforcement (ICE). The directive — an order the attorney general of New Jersey launched in 2018 — also forbids local and state law enforcement from participating in ICE operations and includes other restrictions.

The GOP attorney general also said his department would file a complaint with King County, which encompasses the liberal city of Seattle, for not allowing the Department of Homeland Security (DHS) to use the King County International Airport to remove illegal aliens ordered to be deported from the U.S.

The DOJ isn’t stopping there. Barr said his department will be conducting reviews of sanctuary jurisdictions across the country.

“Further, we are reviewing the practices, policies and laws of other jurisdictions across the country,” he said. “This includes assessing whether jurisdictions are complying with our criminal laws, in particular the criminal statute that prohibits the harboring or shielding of aliens in the United States.”

Shortly after his address, the DOJ announced the two lawsuits against New Jersey and King County. Additionally, the department lodged a complaint against California that challenges a state law, A.B. 32, which prohibits the operation of private detention facilities. Barr said the law was intended to forbid the detention of aliens in its state.

“Today is a significant escalation in the federal government’s efforts to confront the resistance of ‘sanctuary cities.’ But by no means do the efforts outlined above signify the culmination of our fight to ensure the rule of law, to defend the Constitution, and to keep Americans safe,” Barr said.

“We will consider taking action against any jurisdiction that, or any politician who, unlawfully obstructs the federal enforcement of immigration law,” he added.

The lawsuits follow DHS revocation of Trusted Traveler Programs for New Yorkers in response to the state barring DMVs from sharing information with ICE and Custom and Border Protection (CBP). ICE has also begun issuing subpoenas for information with jurisdictions that refuse to cooperate with federal officials.