Are Skeptics Right About This Gospel ‘Contradiction’? 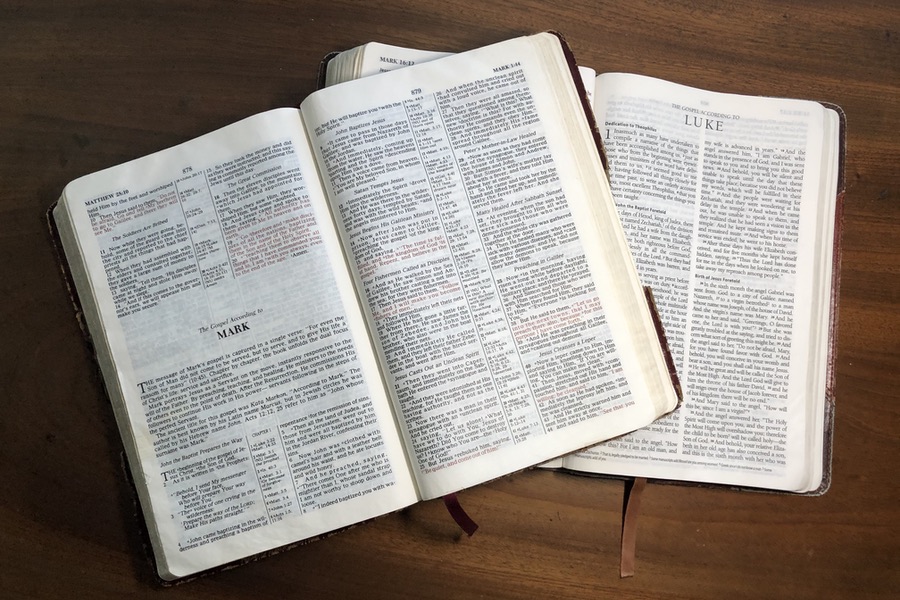 Jesus is silent the entire time, as if in shock, until his cry at the end, echoing Psalm 22…Mark is trying to say something by this portrayal. He doesn’t want his readers to take solace in the fact that God was really there providing Jesus with physical comfort. He dies in agony, unsure of the reason he must die.

Ehrman says this stands in sharp contrast with Luke’s calm and collected version of Jesus:

In this account, Jesus is not at all confused about what is happening to him or why. He is completely calm and in control of the situation; he knows what is about to occur, and he knows what will happen afterward…This is a far cry from the Jesus of Mark, who felt forsaken to the end.

Did Jesus really not know why he had to die in Mark’s Gospel?

But according to Mark, is Jesus all that doubtful about why he has to die? No, Jesus talks about his imminent demise repeatedly:

Ehrman notes that Jesus quotes Psalm 22:1 as an indication that Jesus’ faith in his Father began to waver. Let’s look at the text itself:

And when the sixth hour had come, there was darkness over the whole land until the ninth hour. And at the ninth hour Jesus cried with a loud voice, “Eloi, Eloi, lema sabachthani?” which means, “My God, my God, why have you forsaken me?” (Mark 15:33-35

Notice that Matthew includes this text in his version of the story as well, and we know Matthew is quick to connect Jesus to the Old Testament. (Matthew 27:45-50) He is always pointing to Jesus’ Jewish context. Matthew apparently didn’t see this “cry of dereliction” as problematic.

Why? In early Judaism, it was common to invoke a complete Psalm just by quoting the opening line. For example, Mishna Taanit 2.3 reads,

So to understand why Jesus is quoting 22:1, we have to read the entire psalm.

Against the ‘confused Jesus’ theory, Psalm 22:5 speaks of how those who trust in God are delivered and not disappointed: “To you they cried and were rescued; in you they trusted and were not put to shame.”

Psalm 22:23-24 talks about how God will ultimately not hide his face from his afflicted ones: “For he has not despised or abhorred the affliction of the afflicted, and he has not hidden his face from him, but has heard, when he cried to him.” So this isn’t all about Jesus feeling completely and forever abandoned on the cross, unsure of his mission.

Secondly, it is difficult to see how Psalm 22 is just a psalm about one of David’s rough days.

Psalm 22:14-15 says: “I am poured out like water, and all my bones are out of joint; my heart is like wax; it is melted within my breast; my strength is dried up like a potsherd, and my tongue sticks to my jaws; you lay me in the dust of death.”

While the psalmists are given to hyperbole, it takes a real stretch of the imagination to see David applying this to his own sufferings and living to sing about it. Let’s look and see why.

“The difficulty surrounding exhalation leads to a slow form of suffocation. Carbon dioxide builds up in the blood, resulting in a high level of carbonic acid in the blood. The body responds instinctively, triggering the desire to breathe. At the same time, the heart beats faster to circulate available oxygen. The decreased oxygen (due to the difficulty in exhaling) causes damage to the tissues and the capillaries begin leaking watery fluid from the blood into the tissues.

“This results in a build-up of fluid around the heart (pericardial effusion) and lungs (pleural effusion). The collapsing lungs, failing heart, dehydration, and the inability to get sufficient oxygen to the tissues essentially suffocate the victim. The decreased oxygen also damages the heart itself (myocardial infarction) which leads to cardiac arrest. In severe cases of cardiac stress, the heart can even burst, a process known as cardiac rupture. Jesus most likely died of a heart attack.”

They pierced my hands and my feet

The Dead Sea Scrolls and the Greek Septuagint were both written before Jesus, and they both contain the word for pierced, or more accurately, bore through. And even if the original wording is “like a lion at my hands and feet”, what follows exactly? The writer talks about the sufferer surrounded by fierce beasts, a metaphor for human enemies who are acting like savage animals. Look at verse 13: “they open wide their mouths at me, like a ravening and roaring lion.” These lines describe the ridicule, abuse, and execution of the psalmist and yet this didn’t happen to David.

The sufferer is delivered and the nations praise God

Psalm 22:18: “They divide my garments among them, and for my clothing they cast lots.” The psalmist says this to show how close he is to death. His enemies are expecting his death so much that they’ve already divided his clothes among themselves. Both Mark and Luke describe this event. (Mark 15:24, Luke 23:34).

Finally, Psalm 22 begins with the persecution and death of the king of Israel, and ends with the pagan nations turning to God:

Psalm 22:26-31: “The afflicted shall eat and be satisfied; those who seek him shall praise the Lord! May your hearts live forever! All the ends of the earth shall remember and turn to the Lord, and all the families of the nations shall worship before you. For kingship belongs to the Lord, and he rules over the nations. All the prosperous of the earth eat and worship; before him shall bow all who go down to the dust, even the one who could not keep himself alive. Posterity shall serve him; it shall be told of the Lord to the coming generation; they shall come and proclaim his righteousness to a people yet unborn, that he has done it.”

This is the psalm Jesus applies to himself on the cross! In light of these facts, Jewish scholar Judith Newman remarks, “Jesus’ words on the cross from Psalm 22:1…may not thus simply lament divine abandonment, but point to the end of the psalm with its praise for divine restoration.” Jesus understood his death as what would lead the Gentiles into the worship of the God of Israel. That’s what starts to happen at the foot of the cross.

Jesus uttered a loud cry and breathed his last. And the curtain of the temple was torn in two, from top to bottom. And when the centurion, who stood facing him, saw that in this way he breathed his last, he said, “Truly this man was the Son of God!” (Mark 15:37-39)

Notice that the first person who really gets the meaning of it all in Mark’s Gospel is a Roman soldier. It seems then to be incorrect then to say that Jesus saw his death as a failure. Instead, he saw it as a fulfillment of prophecy. Through it, the Gentiles will worship the God of Abraham. That’s exactly what’s happened for the past 2000 years. Mission accomplished.

What about the cool and collected Jesus in Luke’s Gospel?

Jesus wasn’t all that of a stoic in Luke’s Gospel. In the Garden of Gethsemane, Luke says Jesus’ sweat became like drops of blood because of his agony over going to the cross. He writes: “And there appeared to him an angel from heaven, strengthening him. And being in agony he prayed more earnestly; and his sweat became like great drops of blood falling down to the ground.” (Luke 22:43-44)

To do away with this problem, Ehrman says that these verses were later scribal interpolations, and to be fair, some of the oldest manuscripts we have do not include these verses. This passage is noted and bracketed in many translations. On the other hand, we have tons of external evidence that these two verses are genuine. Early church fathers like Justin Martyr, Hippolytus, Dionysus, Eusebius, Epiphanius, Chrysostom, Jerome, Augustine all quote these passages.

In The Dictionary of Jesus in the Gospels, noted New Testament scholars Joel B. Green and Scott McKnight also provide several internal reasons for accepting these two verses as genuine. They write:

“These data, along with the fact that the presence of these verses is of a piece with Luke’s interpretation of this scene as a whole, point clearly to the originality of 22:43–44. Moreover, it is not difficult to imagine a rationale for the early exclusion of these verses in the manuscript tradition. The portrait of Jesus contained therein—human, agonizing, needful, requiring angelic support—would have been problematic to some. Accordingly, they may have been dropped for doctrinal reasons. There is thus good reason for taking these verses as original to Luke.”

For these reasons and others, scholars split on the inclusion of these passages in Luke’s Gospel. We can’t say with confidence they aren’t original to the text, and they present a very human portrait of Jesus. Elsewhere in Luke, Jesus shows that he’s hardly a Vulcan and weeps over Jerusalem. (Luke 19:41)

This alleged contradiction is hardly insurmountable. Mark’s Jesus knows why he is dying and what it will accomplish. And Luke’s Jesus shows he underwent some very deep human emotions and needed divine assistance. Bart seems to be overplaying his hand here.