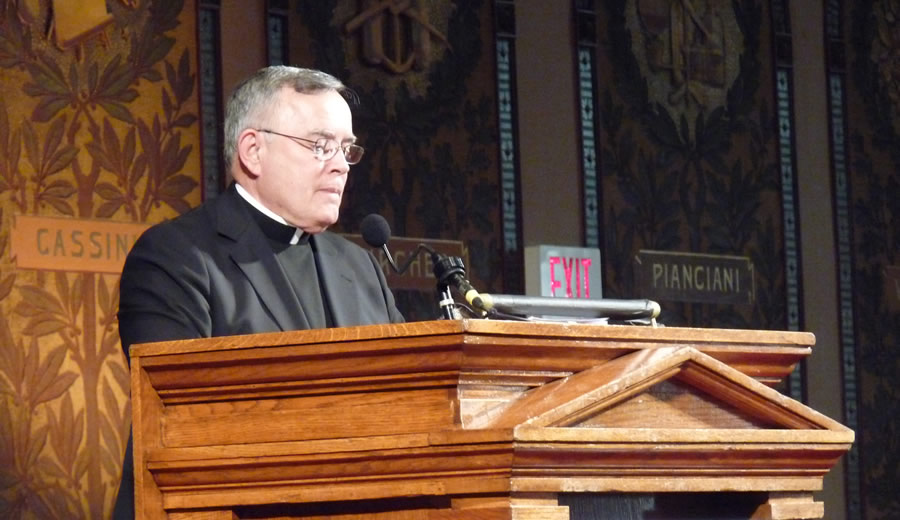 Archbishop Charles J. Chaput said this in a 2016 lecture at the University of Notre Dame. It is characteristic of Chaput, and it pretty well describes him. At a time when Catholic bishops are in the news because of sexual abuse scandals, it’s worth noting that in his life as a bishop, Chaput has been a good spiritual father to many. He’s a great gift, a man of humility and clarity and humor and courage. He just recently celebrated his 75th birthday, making this a good time to celebrate his life and ponder the significance of his message.

When Pope Francis came to the United States four years ago for the World Meeting of Families in Philadelphia, the theme of the event and visit was “Love is our mission.” Around the time of the pope’s visit, Chaput highlighted many of the social services provided by the Church in the City of Brotherly Love. His words showed us how the mission of love is carried out in the world — through the hard, unglamorous work of charity, done by faithful servants.

I remember one interview years ago, in which he talked about how, if you had asked him decades ago which major political party would become the defender of legal abortion, he would have never thought it would be the Democrats. There were simply too many Catholics in the Democratic party around the time of the sexual revolution. Surely, the Catholics would never let the party go down into such grave darkness without a fight.

Well, we all know how that worked out.

It’s not a right-wing thing to oppose a culture of death and to want to help women and families — it’s a human thing. And it’s certainly something that Catholics ought to be doing.

For a number of years now, I’ve watched on the internet some of Sunday-night Mass with Archbishop Chaput at the cathedral in the Center City neighborhood of Philadelphia. His homilies are always about how the Gospels are meant to guide our lives and how we can make that guidance most effective. His homilies are challenging, and it’s hard not to be moved to recommit to the Church and its mission, and to God. It’s a reminder that even social media can be used for light and good.

In his 2017 book Strangers in a Strange Land: Living the Catholic Faith in a Post-Christian World, Chaput wrote about how hope was different from optimism. “Upbeat feelings are fickle. They don’t last long if we look hard at the problems in our own lives and the world around us.” Hope, on the other hand, “is like a muscle or a skill that, with practice, lets us throw a fastball or play the piano.” It’s also a gift of faith and “an act of trust in God’s future.”

Created for Something Better

Obviously, not everyone in the world, this country, or reading this column is a religious believer. But those of us who call ourselves Christian owe it to truth and to our neighbors of all persuasions to live in hope, and to show others what hope means. Otherwise, we’ll be stuck in miserable politics and a miserable culture, letting people slip into despair. God created us for something better. And thanks be to God for good men like Charles J. Chaput, who have said “yes” to the will of the Lord in their lives. Pray for more good people to live good lives as shepherds of souls, wherever they find themselves. And let’s follow their lead, encourage them and challenge them as they encourage and challenge us to think and hope beyond the meager limits of ourselves.