It is unlikely that those paid to make AOC’s sweatshirt could afford to buy the end product — even if they’re earning what she calls a “living wage.” 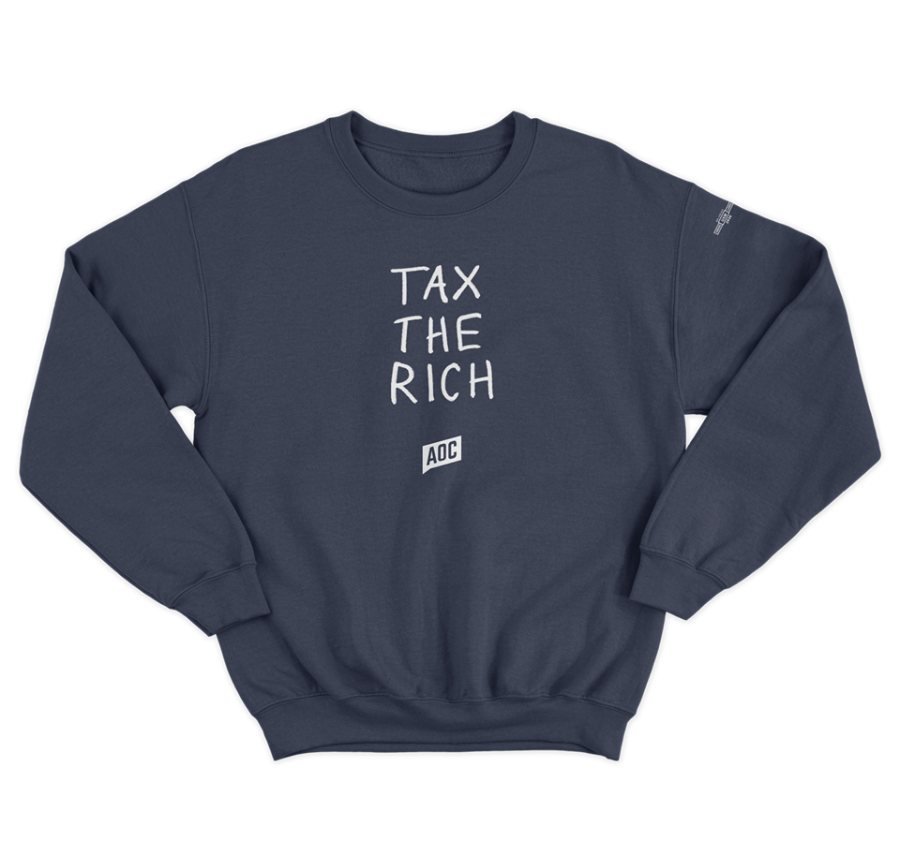 Rep. Alexandria Ocasio-Cortez did what she does best this week and created another social media firestorm.

It all started when a Twitter account called Tax March, which apparently advocates for higher taxes, posted a link to the congresswoman’s online merchandise store and complimented a sweatshirt she sells.

The sweatshirt pictured is a plain, black, cotton item emblazoned with the words “Tax The Rich.” But the style itself is not what made headlines, rather it was the price tag: a whopping $58.

The usual (and deserved) criticisms poured in quickly.

Gonna buy a Tax The Rich sweatshirt from AOC so everyone knows I’m loaded. https://t.co/23uJ1dj1Um

Never one to back down from a fight, the congresswoman responded to the criticism on her own Twitter account stating that the merchandise was “made in the U.S. with dignified, union jobs paying living wages.”

She went on to say that “Republicans are freaking out because we don’t use slave-wage labor for merch that funds grassroots organizing” and that people could obtain the sweatshirt for free if they chose to volunteer for her.

We’ll leave the fact that the congresswoman included the term “slave-wage labor” in a post that simultaneously called for others to work for her for free alone, as we have bigger fish to fry here. (But, come on.)

So to summarize, Ocasio-Cortez is selling sweatshirts that say “Tax The Rich” at a price most poor or working class people could not reasonably afford. She’s making money off of her merchandise that attacks the creation of wealth. And her excuse for all of this hypocrisy is that it costs more to buy from whole-sellers who pay a “living wage” and use American labor. There’s a lot to unpack here.

While Ocasio-Cortez clearly thinks her choice to employ operations that pay a “living wage” (presumably at least $15 an hour) is virtuous, it actually perfectly portrays how her economic ideas hurt people — especially the poor.

As the cost for labor increases, so do the prices of goods and services.

As much as Ocasio-Cortez likes to think she’s sticking it to the rich by buying from companies that pay their employees more than their fair market value, in reality she’s just passing those increased labor costs on to her supporters.

When companies are forced to pay too much for labor, either due to governmental rules or regulations, they merely bake those costs into the price of their product.

When that product is something as frivolous as a luxury sweatshirt peddling trite socialist slogans, we can laugh about it. But Ocasio-Cortez wants to use big government to force these costly business conditions on every industry — meaning the cost of essential goods like food, automobiles, and essential clothing items would all increase. That doesn’t uplift struggling people — it spells disaster for the poor.

Ocasio-Cortez and her ilk might counter that their mandates would increase peoples’ take-home pay, so they could afford higher prices and still obtain a higher quality of life. However, it’s also important to remember that when the price of goods and services increases, real wages fall.

Real income is not nominal wages, it is an individual’s actual purchasing power in the market. Even if someone is paid $15 an hour, they will likely see their purchasing power decrease as the price of goods and services increases as a result of companies having to pay workers too much. As one example, it is unlikely that those paid to make AOC’s sweatshirt could afford to buy the end product in this scenario — even if they’re earning what she calls a “living wage.” Ultimately, people care about what their paychecks can buy, not the number itself.

Furthermore, Ocasio-Cortez’s use of the term “Made in America” may have just been intended to troll Trump-supporting Republicans, but the congresswoman accidentally proved why free trade creates prosperity. When the U.S. or any country tries to force domestic production of certain goods that can be made more efficiently in other countries, it results in inefficiency and higher prices.

That’s how you end up hawking a nearly $60 sweater when the same thing could be available for half or one-quarter of the price.

Personally, I like to buy from and support American companies when I can. But the reality is that our regulatory framework, cost of labor, and business taxes make many American-made products far more expensive. When I can afford to, I’m happy to buy local, but I’m beyond grateful I have the option to buy globalized products when it comes to high-end items like my iPhone, which would be quite expensive if it was a “Made in America” product.

If these kinds of products were only made in America, and if Ocasio-Cortez got her way and made it impossible to hire anyone for less than $15 an hour, no one but the very wealthy would be able to afford this technology.

If politicians want to elevate American companies and products, they should work to deregulate our economy, slash corporate taxes, and create an economy where businesses can create cost-effective products. Until that happens, we should all thank our lucky stars we have the ability to order cheaper products from other places.

And we shouldn’t devalue the work being done by others to produce these goods in other parts of the world. Nowadays, it’s become popular to virtue-signal against “sweatshops” in other countries. But as is so often the case with those more focused on virtue-signals than price-signals, these ideas would also hurt the poor. Developing countries need to be able to compete in a global marketplace. And while these jobs may not meet our standards in an industrialized country, they are a life raft to those struggling to obtain basic necessities in third-world countries.

Plain and simple, when put into practice, the policies that undergird Ocasio-Cortez’s worldview hurt people. In contrast, free markets (when allowed to operate organically) lead to an abundance of affordable products and all people having greater access to goods and services. And free trade is an essential component of free markets.

“It is the maxim of every prudent master of a family, never to attempt to make at home what it will cost him more to make than to buy,” wrote Adam Smith. “What is prudence in the conduct of every private family, can scarce be folly in that of a great kingdom.”

We can forgive everyday people for making the kinds of Econ 101 errors that plague this agenda. But as an educated congresswoman, Alexandria Ocasio-Cortez has no excuse. We can laugh about her expensive sweaters, yet there’s nothing funny about the fact that the policies she pushes would make life less affordable for all Americans.

Hannah Cox is a libertarian-conservative writer, commentator and activist. She’s a Newsmax Insider and a Contributor to The Washington Examiner.