Was There Anything Really New About the New Year’s Eve Gang Rape Attacks in Cologne? 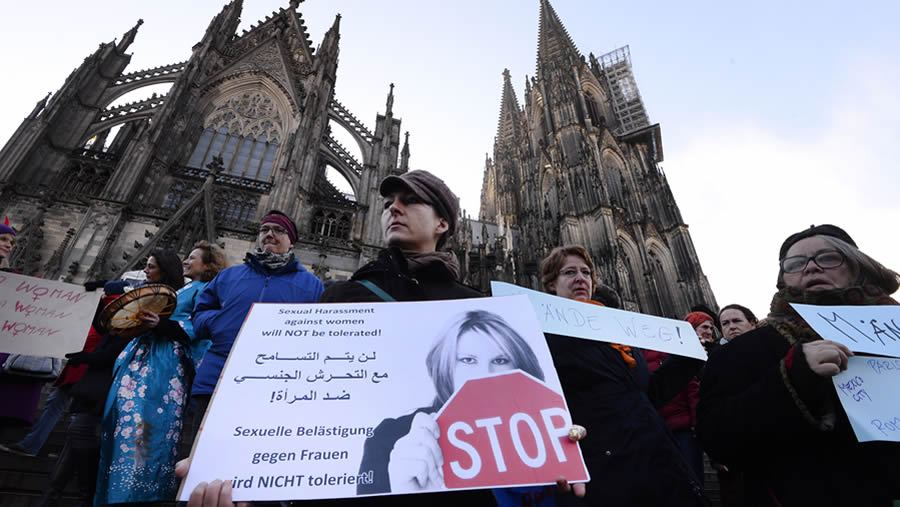 It is not unusual for New Year’s Eve revels to spawn drunkenness, brawls and even sexual assaults, but what happened in downtown Cologne on the night of December 31st seems to be in a class of its own. People alighting from the train to join the gathering crowd found themselves surrounded by gangs of men who proceeded to grope and assault women, and also to grab items from their victims before merging back into the crowd. Similar assaults were reported in Hamburg and Stuttgart. The organisation and scale of the attacks — up to 1,000 men are thought to have been involved — was new and sinister.

More than a week later the episode has escalated into major crisis for Angela Merkel’s government and its open-door policy for refugees and migrants. It has also raised the question of whether political chatter about women’s rights is much more than a convenient slogan.

An official report released on Sunday confirmed allegations by victims (more than 500 of them have laid criminal complaints, of which 45 percent involved sexual assault) that the assailants were North African or Arabic. The report found that the suspects in the assaults were “almost exclusively” from a migrant background. Of 19 men initially being investigated, 14 were from Morocco and Algeria; 10 were asylum-seekers, nine of whom had arrived in Germany since last September. By Tuesday this week 55 suspects had been detained, most of them foreign nationals.

The authorities were at first reluctant to concede the seriousness of the attacks. More than 1 million refugees and migrants entered Germany in 2015 and thousands are still arriving every day. While Merkel and her country have won international acclaim for their humanitarian attitude, many Germans question their country’s ability to assimilate such a massive wave of foreigners, while others, represented by the Pegida movement, are outright opposed to Muslim immigration.

The police and political forces rightly feared that making an issue of the New Year attacks would inflame activism and debate. And yet, by initially downplaying the seriousness of what happened they have only made the situation worse. A peaceful protest on the weekend turned violent when Pegida supporters assaulted police officers, and in separate incidents several foreigners were beaten up.

Responding to all this Merkel has conceded, “The events of New Year’s Eve have dramatically exposed the challenge we’re facing, revealing a new facet that we haven’t yet seen yet.” Her government is talking urgency on a proposed law change that would make it easier to deport asylum-seekers convicted of committing crimes in Germany, including sexual assault and violent theft.

Is Cologne really something new?

According to the German Chancellor the Cologne attacks reveal “a new facet” of mass immigration, one that couldn’t have been foreseen. In fact, it could have, if Swedish authorities and media had not suppressed a very similar incident in Stockholm last August.

Last week Swedish website Nyheter Idag revealed that at a crowded concert during a youth festival (‘We Are Sthlm’) in that city, hordes of young men pressed against young girls and sexually molested them. Some girls alleged serious sexual assaults happening right in front of the stage. During a single night, police had to take action against around 90 younger males, but older men are alleged to have been involved in the abuse as well.

Though the police themselves did not inform the public about these events, a psychologist who worked for the Stockholm police department tipped off a reporter at a leading Swedish daily, Dagens Nyheter. She was interested, he says, until he told her that all the boys and men detained by the police were from Afghanistan and Syria. She phoned a police officer once (he was reportedly keen to talk to her about the episode) and then dropped the story. Last week following the Cologne attacks she finally contacted the police officer again and said that her editor had, at the time, dismissed it as “SD [Sweden Democrats] fabrications.”

And now, at last, Dagens Nyheter has published a piece on the Stockholm assaults under the heading, “Women’s right to party safely cannot be sacrificed.” In it, according to Nyheter Idag, freelance writer Lasse Wierup says the police considered the whole incident “very sensitive” because “the young lads that were sent away were judged to be mostly unaccompanied (asylum seekers or refugees).” As for the media silence:

“Why the widespread sexual harassments, in the midst of central Stockholm, with some minor exception, were left in a media shadow, is unknown to me. But the very suspicion that the sexual assaults were considered awkward to (write about) is a betrayal of the victims,” writes Wierup in the very same newspaper that covered up the whole incident to begin with.

Beyond migrants — immunity for the high and mighty

Echoing Angela Merkel, a Stockholm city official told AP that the phenomenon of “a larger group doing [sexual assault] almost in an organised way” is “a completely new level of obscenity.” But for Britons, it will have a familiar ring — and so will the cover-up angle.

In August 2013 the country was rocked by revelations about Pakistani gangs sexually grooming and abusing poor teenage and pre-teen white girls in Rotherham — something that had been going on for 16 years, affecting 1,400 girls, while local and national authorities argued with each other but ran scared of the racial implications. And that was not the only British town where the safety of girls was being sacrificed to political expediency.

But lest this appear as an attack on Muslim immigrants, it is important to point out that Cologne and Stockholm and Rotherham fit into a much bigger picture of official lip-service to women’s rights on the one hand, and kowtowing to special interests on the other.

Why are Australia’s Defence Forces plagued by sexual assault scandals? Because those in authority have turned a blind eye to abusive behaviour, or investigated complaints half-heartedly. Alleged abusers continued to serve in the ranks.

How did British media personality Jimmy Savile get away with sexually abusing scores, if not hundreds of young victims, many of them vulnerable hospital patients, over four decades and under cover of charitable work? Because of collusion by the BBC and National Health Service. How did he come out of two police investigations, one in 2009, two years before he died, without being charged with any sexual offence? Did he have friends in the Crown Prosecution Service?

And then there’s Bill Clinton, former president of the United States who, if his wife is lucky in her presidential run, could return to the White House. Hillary Clinton, campaigning as a champion of women’s rights, referred last week to arch-opponent Donald Trump’s “penchant for sexism,” giving him an opening to label her husband “one of the great woman abusers of all time,” and Mrs. Clinton herself his “enabler.”

Political bombast aside, there is unfinished business from Mr. Clinton’s past, highlighted by current testimonies from several of his former victims. One of them, Kathleen Willey, accuses Mrs. Clinton of intimidation aimed at preventing her from making a deposition in the Paula Jones lawsuit that threatened Mr. Clinton’s presidency — accusations supported by the late Christopher Hitchens in an affidavit. Not to worry, though; Mrs. Clinton has official support from that pillar of American society, Planned Parenthood.

Beside such high profile immunity, official covering up of the crimes of migrant men in Europe falls into place. Stamping out sexual harassment and violence against women and girls is a top priority of every Western government and public institution — except when it is not. If political or institutional futures are in the scales, the latter will probably win.