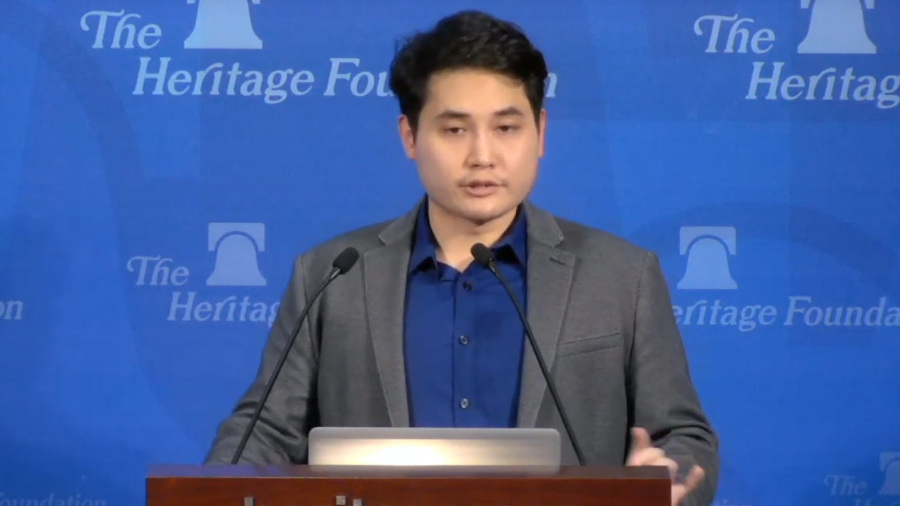 The Portland, Oregon-based journalist who was beaten last summer by Antifa extremists says the violent leftist group’s ultimate goal is to establish a communist state.

“Antifa is a far-left ideology and movement which brings together radical communists and anarchists seeking a revolution that would result in communism,” Andy Ngo said Thursday in an appearance at The Heritage Foundation.

“But they believe that they can do it and secure a communist society without the national borders, law enforcement, the military, or state authoritarianism that has represented other communist revolutions,” Ngo, who is in his early 30s, said in a packed auditorium at the think tank’s headquarters on Capitol Hill.

Ngo, editor-at-large for the Canada-based Post Millennial, was beaten and kicked by Antifa members in June while covering the leftist group’s protest of a march in Portland held by the far-right Fat Boys.

The attack by black-clad and masked assailants left cuts and bruises on his face, and he also suffered a brain injury. He said at Heritage that although the assault was short, it was brutal.

“I’ve never been in a fight. I wasn’t even sure what had happened,” Ngo said, adding:

I actually thought maybe somebody accidentally tripped into me before I had a chance to turn around and see what happened. The punches came from every direction and all I saw was just a sea of black face and they were wearing gloves that [had] hardened Fiberglass material on it. So it was like getting hit with bricks repeatedly. The assault was caught partially on camera, and it lasted for seconds.

By the time it was over, I was dazed. I was bloodied, and I just kept thinking, where are the police? I could still see the [Multnomah County] Justice Center, but no justice, just anarchy and chaos.

No arrests have been made in the attack, Ngo said.

“It’s been over four months since the 29th of June and no one has been arrested. That’s the unfortunate reality where I find myself today.”

Ngo, whose parents fled Vietnam for the U.S. in the late 1970s, said Antifa has very definite goals to accomplish through its protests and violence.

“They want to create communities that can operate autonomously and independently of the government. … It’s a utopian dream, or dystopian, but that hasn’t stopped them from trying,” Ngo said. “You can look at places like Portland where they have a lot of sway and cultural influence, where they tried to literally make Antifa no-go zones for journalists, for law enforcement or law-abiding citizens driving on the street.”

He said that although Antifa claims its membership is diverse, it is anything but.

“Like other extremist movements, its ideologues are mostly male and young and wild, claiming to operate on a mandate of diversity.”

He added that Antifa promotes the antithesis of American values.

“Antifascism, when they say it, really just means that they’re against capitalism and liberalism,” Ngo said.

Antifa’s mission, he said, is to promote fascism and destroy American ideals and the principles of liberal democracy:

They view fascism as a part of the evolution of capitalist society and liberalism as a system that allows fascism to grow, hence that’s why they particularly target symbols of the U.S. like flags.

They view this country as a bulwark of fascism; when they say they only participate in self-defense, what that means is offensive and premeditated violence against their ideological opponents because opposing speech, words, and ideas in their mind is tantamount to violence and can be responded [to] with violence.