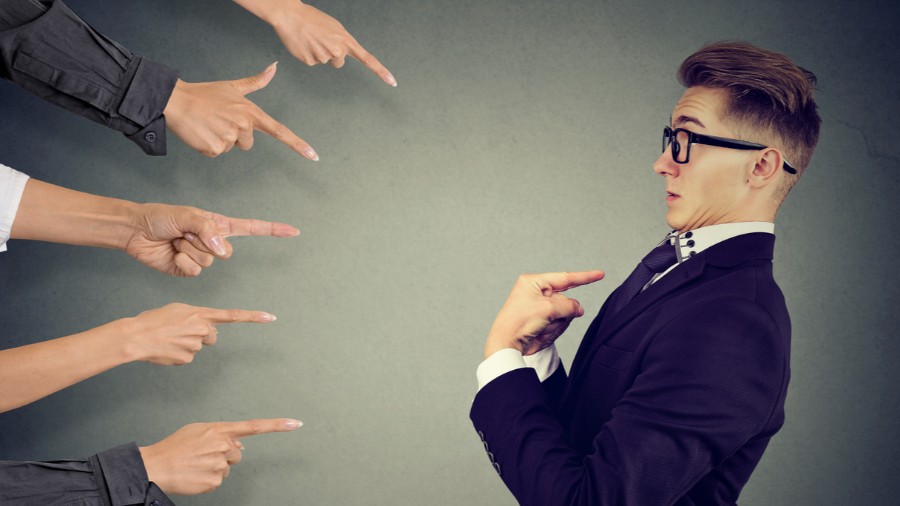 I don’t mean to insult your intelligence, but as George Orwell wrote, “We have now sunk to a depth at which restatement of the obvious is the first duty of intelligent men.”

In discussions today about racism, sexism, homophobia, transphobia, and so on, accusations abound, the accused panic, and the witch-hunters consider denials evidence of guilt.

In discussions today about racism, sexism, homophobia, transphobia, etc., accusations abound, the accused panic, and the witch-hunters consider denials as evidence of guilt.

Best-selling authors who call themselves experts on these issues today demonstrate this in their writings and interviews. White Fragility author Robin DiAngelo routinely tells her audiences that all their internal negative reactions to her accusations of racism are evidence of their “fragility” and therefore proof of guilt.

DiAngelo describes “white fragility” as “triggering a range of defensive moves” — you know, like denial. Emotions like anger, or even silence, are signs of the aforementioned fragility. So is any argument you try to make against her claim.

Either white people admit their inherent and unending racism and vow to work on their white fragility, in which case DiAngelo was correct in her assessment, or they resist such categorizations or question the interpretation of a particular incident, in which case they are only proving her point.

The so-called “anti-racist” expert Ibram Kendi told an audience in New York, “The very heartbeat of racism is denial. When people say they’re not racist, they’re using the words that white supremacists use.”

The Trap is Laid

This is an old tactic, and its problems should be apparent. Consider briefly:

First, denial is a nearly automatic, human default response, whether one is guilty or innocent. Do we expect people to just accept and admit to being a social pariah? Denial on that level is evidence of nothing other than being human.

See how easy it is? You can read more about this in my best-selling book How to be an Anti-Rapist. (Just kidding.)

Second, an innocent person can surely be expected to react with more offense, and thus more pronounced denial. It’s the half-hearted denial that I find suspicious. Granted, vehement denials can also raise suspicion (“the lady doth protest too much, methinks”), but still a strong denial is exactly what a falsely slandered person would (and should) offer.

Third, this approach makes the accusation unfalsifiable. If your own defense is simply evidence of guilt, this effectively silences you, eliminating any possibility of a genuine defense, even where there is one.

The fact is, it’s is a cheap trick. In the words of Admiral Ackbar, “It’s a trap!” There’s even a name for it — a Kafka trap, from Franz Kafkas’s “The Trial,” in which an innocent man is arrested and convicted in court by the use of this circular logic.

We see it also in Orwell’s fictional future, in which those accused of thought-crimes either admit it, or are taken as doubly guilty for failing to admit it. It’s been done in nearly every unjust kangaroo court  — the Salem witch trials, the Spanish Inquisition, the “Reign of Terror” during the French Revolution, etc. The trap is laid, and every category of genuine innocence is excluded.

There’s a nice quick way to demonstrate the foolishness of this tactic. Just turn the tables: If Wally Wokester is playing this game to accuse you of racism, change one letter and turn it back by saying  Wally is a rapist.

Of course Wally will deny it, as he should. That’s when you remind him that denial is the very heartbeat of the rapist. A guilty rapist will inevitably exhibit denial, and show emotions like anger. Basically when Wally says “I’m not a rapist” he is simply saying the words that every rapist says.

See how easy it is? You can read more about this in my best-selling book How to be an Anti-Rapist. (Just kidding.)

Celebrity authors of social justice books should know better than to pull such transparently illegitimate tricks. If that’s their level of argument, they shouldn’t expect reasonable people to take them seriously. And reasonable people really ought to quit listening to them.