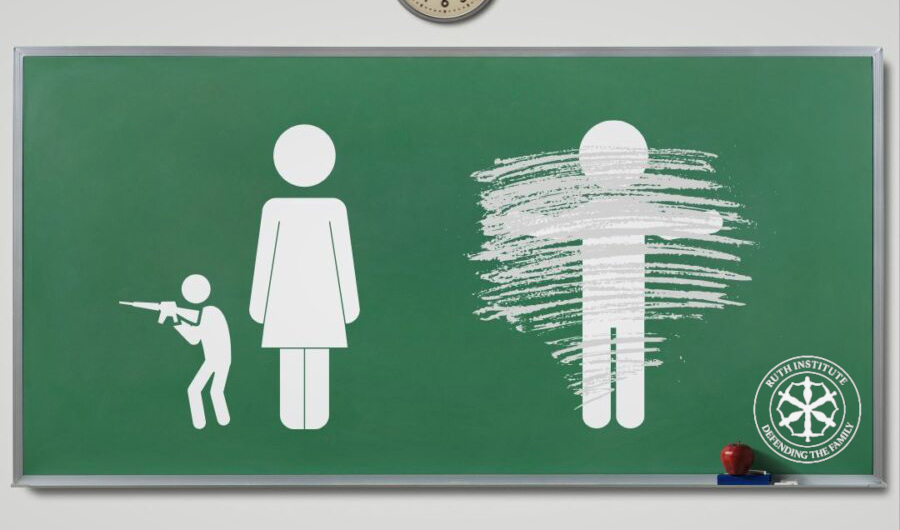 “We’re reaping the consequences of generations of young men raised with relationship chaos in their families and without their biological fathers in the home. The social toll is enormous.”

“You can start with Salvadore Ramos, the Uvalde, Texas, mass murderer,” Morse observed. “He was raised by women: his mother and grandmother. He rarely saw his father, who lived with a woman to whom he wasn’t married.”

“We see the pattern repeated over and over again,” Morse explained. “A boy’s parents divorce when he’s young. He’s raised by his mother and a succession of her live-in boyfriends. Even if he isn’t physically or mentally abused, the adult male influence in his life is negligible.”

“There’s no one to model his conduct after, no one to teach him the lessons that only a father can teach. Often, he grows up emotionally detached or angry, susceptible to drugs, violent media and the influence of his peers.”

Dr. Patrick Fagan, Director of the Marriage and Religion Research Institute, demonstrates that drop-out rates, juvenile delinquency, adolescent drug and alcohol abuse, and premarital sex all are substantially higher for boys and girls raised without their father.

“The Ruth Institute has been sounding the alarm since our inception,” Morse said. “We were one of the first groups to publicize the consequences of no-fault divorce, including the injustices to faithful spouses and innocent children. We do not scapegoat men or ‘deadbeat dads,’ in general. Rather, we call attention to the unjust social policies at work, including the misbegotten incentives of our welfare programs and the divorce law, family court leviathan.”

The Ruth Institute’s Fatherhood Resource Center contains a wealth of data, as well as inspiring stories, on the ways good fathers benefit their children throughout the child’s life.

“We’ve seen the negative impact of the absence of the father from the home,” Morse said. “Let’s work toward the opposite by encouraging fathers to be good role models for their children.”

Learning from the Pro-Life Movement’s Past

The latest Dr. J Show features three gentlemen who will speak on the “Learning from Past Successes” panel at the Summit for Survivors of the Sexual Revolution, June 24-25 in Lake Charles, LA.

Jim Garlow is a long-time pastor who transitioned to full-time ministry to government officials! (Let’s just let that sink in for a moment … . Wow.) His organization, co-founded with his wife, Rosemary, is called Well Versed. They have led Bible studies to members of Congress and met with ambassadors, members of Parliament, presidents, and prime ministers. He worked alongside Dr. Morse in California’s successful Prop 8 campaign defining marriage as between a man and a woman.

Eric Scheidler is the executive director of the Pro-Life Action League, founded by his father, Joe Scheidler, famous for being taken to court by the National Organization for Women, winding up in the Supreme Court three times, and ultimately winning. “Our mission is to cause trouble, as you might guess from my father’s lawsuits,” Eric quipped. The Pro-Life Action League organizes successful annual events all over the country.

Arnold Culbreath spent many years working with the late Dr. Jack Willke, another great pro-life pioneer. He is a pastor, the founder of Breath of Life ministry, and the Director of Ministry Engagement for the Douglass Leadership Institute, which, among many other things, conducts pro-life leadership training for African-American pastors, since the black community has been hit hardest by abortion.

At the Summit, Eric Scheidler will share about the lengths pro-abortion organizations will go to silence witnesses for life. Arnold Culbreath will likewise share what he learned in the pro-life movement working for Dr. Willke. And Jim Garlow will speak about the experience he has gained in his work, not only for life, but also for the sanctity of marriage.

Where Will You Be When Roe is Repealed?

When the Supreme Court decision repealing Roe v. Wade is announced, the place to be is the Ruth Institute’s Summit for Survivors of the Sexual Revolution June 24-25 in Lake Charles, LA.

Ruth Institute President Dr. Jennifer Roback Morse, Ph.D., said: “Our Summit will help launch the post-Roe generation. Everyone who was alive then remembers where they were when JFK died or when 911 occurred. These are the moments in life that hold special significance.”

“Those who worked years, maybe decades, to end abortion, will remember where they were when Roe was repealed. Since abortion is a major focus of our Summit, it’s hard to imagine a more fitting place,” Morse said.

Speakers include some of the major figures in the pro-life movement:

“Abortion is one of the plagues produced by the most destructive revolution in human history, the Sexual Revolution. But at this year’s Summit, we’ll be celebrating the beginning of the end of legalized abortion,” Morse remarked.

The Survivors’ Summit will also cover gender ideology, Demographic Winter, and other dangers of the Sexual Revolution. Registration is only $199 for a complete 2-day experience (including Core Training and the Friday Evening Banquet). An on-line Virtual Pass is $35.