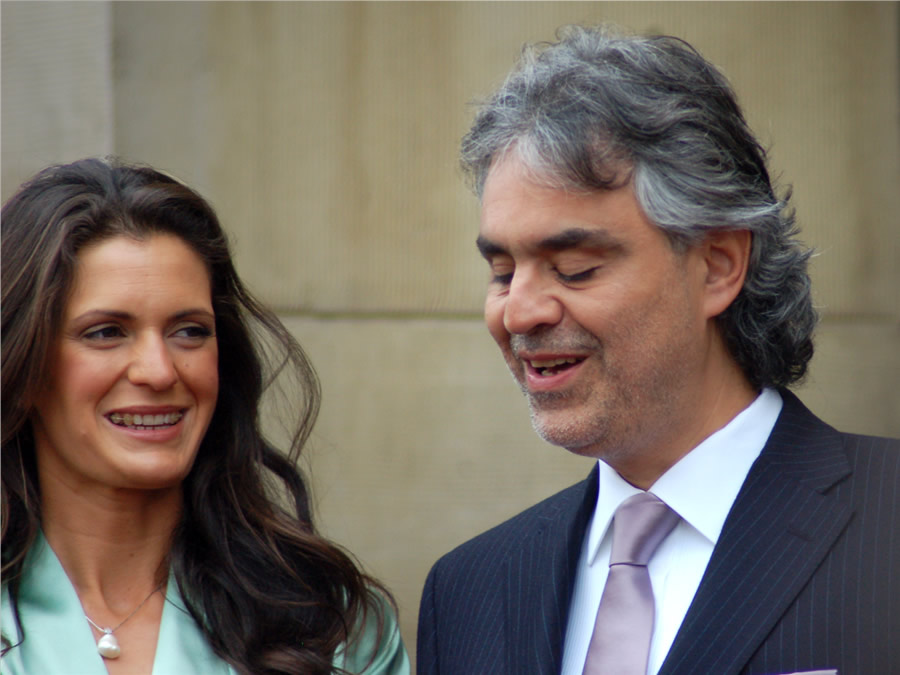 Andrea Bocelli, right, is seen with then-fiancé Veronica Berti, left, on Mar. 3, 2010, during the ceremony unveiling his star on the Hollywood Walk of Fame in Hollywood, Calif.

Sixty-two years ago, a young Italian woman named Edi Bocelli, pregnant with her first child, was hospitalized with appendicitis. Her doctors advised her to abort the child because, they said, “the baby would be born with some disability.” A devout Catholic, Edi Bocelli refused, but the doctors’ prognosis was correct. Her son Andrea was born with congenital glaucoma and was completely blind by age 12.

Despite being unable to see, Andrea was born with other gifts. One, in particular, stands out. His voice has been called “the most beautiful in the world.” According to Celine Dion, “if God would have a singing voice, he must sound a lot like Andrea Bocelli.”

In fact, Bocelli’s albums have sold over 90 million copies. His 1999 album Sacred Arias, is the biggest selling album by a solo classical artist in history, and his 1996 single, “Con te partirò” (“With You I Shall Leave”) is one of the biggest selling singles of all time, putting him on a list that includes Lady Gaga, Maroon 5 and Adele. Bocelli has sung for presidents, prime ministers and popes. He was even named one of the world’s “Fifty Most Beautiful People” by People Magazine.

In 2010, Bocelli told his mother’s story in a video entitled “Andrea Bocelli — His Unknown Story That Touches Hearts.” Sitting at the piano, after describing his mother’s decision to not abort him, he adds, “Maybe I’m partisan, but I can say that it was the right choice.”

Bocelli told an Italian newspaper that he was inspired to share his story by a missionary in Haiti who works with children and women facing difficult pregnancies. “Because of my personal convictions as a devout Catholic,” said Bocelli, “I am not only fighting against something, I am fighting for something — and I am for life.”

The video went viral. Bocelli said he hopes it will “help comfort those who are in difficult situations and who sometimes just need to feel that they are not alone.” In this way, Bocelli’s story is reminiscent of the important work of pregnancy care centers, which also exist to remind women facing a difficult pregnancy that they are not alone. The comfort and support they provide helps women choose life, just as Bocelli’s mother did.

A Reminder of the Christmas Story

Especially at this time of year, Bocelli’s story reminds us of the part a challenging pregnancy played in the story of our redemption. It’s easy for us to forget that God gave Mary the option to say “no.” Her reply, “may it be done according to thy will,” are similar to the words that Edi Bocelli and countless other women have echoed throughout the ages.

And here’s just a small sample of “the most beautiful voice in the world,” Andrea Bocelli singing, “Glory to You, Christ Jesus, you will reign today and forever. Glory to you, you who will soon come!”

Glory to you, Christ Jesus,
you will reign today and for ever
Glory to you! You will soon come;
you alone are our hope!

And, by the way, Andrea Bocelli is holding a Christmas concert, to be streamed online around the world, on December 12. It’s available on pay-per view.

John Stonestreet serves as president of the Colson Center for Christian Worldview. He’s a sought-after author and speaker on areas of faith and culture, theology, worldview, education and apologetics. John is the daily voice of BreakPoint, the nationally syndicated commentary on the culture founded by the late Chuck Colson.

Roberto Rivera is a Fellow and Senior Writer at the Colson Center. He has written for Sojourners, Christianity Today, Books & Culture, Touchstone and First Things, among other publications.