John Chrysostom led the Church in the eastern part of the empire. He preached the whole gospel. That got him sent into exile. 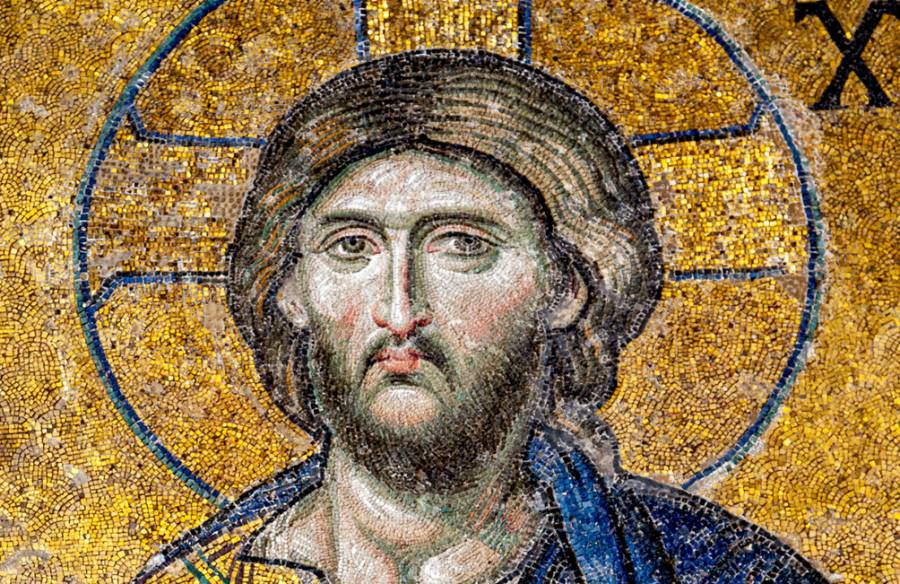 A mosaic of Jesus from Hagia Sophia, the church in Constantinople where John Chrysostom preached. (It's now a mosque, alas.)

He’d preached the Gospel, and infuriated lots of the powerful people in the city. Including the empress herself. She wanted him gone. She probably wanted him dead, but he was too popular to kill. He even angered his own clergy, by telling them to do their jobs. Rarely has a Christian minister made so many enemies.

And why? Because he kept telling people that Jesus meant what He said.

John Chrysostom led the Christian Church in the eastern part of the Roman empire in the late fourth century. He’d become famous as a preacher in Antioch. (You can find his sermons and other ancient Christian works here.) He found himself made the archbishop of Constantinople, though no one asked him if he wanted the job. He didn’t. Suddenly he was the most prominent Christian in the capital of the whole empire.

John preached very practical sermons, going deep into the Scriptures to tell his people what God wanted from them. He preached grace, but he didn’t let anyone think he could accept the grace without living the life. In particular, he constantly told his people to serve the poor. Their lives of luxury and indulgence he condemned. John kept speaking truth to power, as we say nowadays. The people loved him. The ruling classes, not so much.

They kept sending him into exile. Finally, in the year 407, ten years after he began his work in Constantinople, he was sent in exile again. He was 60 years old and worn out from his tireless work. We don’t know who sent him this time, but as far as we can tell, his enemies wanted to make sure he never came back. And he didn’t. He died on the way.

John preached a final sermon before he left. He tells his people that the world would win — but not really. Not eternally. The Church, God’s people on earth, would win.

But here’s the thing about John Chrysostom. John was was a flat-out, damn the torpedoes, full speed ahead, sold out to Jesus, 100 percent Christian. He expected every other Christian to be as well.

Inspiring, at a distance of 1600 years. But were we sitting in front of him as he preached, many of us would get angry too. We’d feel judged. And most of us should. I look at my own life, and I have to admit to being a watch out for the torpedoes, don’t go too fast Christian.

Here’s what John Chrysostom said just before he went into exile. He spoke to his people, but he speaks to us as well. The rest of this is from him, shortened and put into modern language.

The storm rages, but it doesn’t scare us, because we stand upon the Rock. The raging ocean cannot break it. The storm cannot sink the ship of Jesus.

Tell me, what should we fear? Death? To me to live is Christ and to die gain. Exile? The earth is the Lord’s, and the fullness of it. The loss of our property? We brought nothing with us into the world, and we can take nothing away with us.

I despise what the world fears, and hold its good things in derision. I do not fear poverty, nor do I desire riches.

And I am not afraid of death. I do not pray to live, unless I can continue to live for your good. This is why I tell you what’s happening, and urge you to be cheerful.

Wage not war against Heaven. You can’t win. For God is stronger than all. Who will try to subvert the order He established?

If you distrust words, believe in facts. How many tyrants have tried to defeat the Church! How many Christians have they burned to death or fed to wild animals or killed with the sword! Yet they have not succeeded.

Where are they now? Everyone’s forgotten them. But where is the Church? It is more dazzling than the sun. Their deeds are no more, hers are immortal.

Be not disturbed by anything that has taken place. Gain me the grace of an immutable faith. See you not Peter walking upon the waters, beginning to doubt and being on the point of drowning, not through the surging waves, but through the weakness of his faith?

Did we come here by vote of man? Did a man bring us in, that a man might displace us? I say this, not out of pride, nor to boast — God forbid! — but wishing to give courage to what is faint in you.

The devil aimed at disturbing the Church. Wretched and most wicked demon, you could not master walls. Do you think to shake the Church? The Church is in the multitude of the faithful. What an array of immutable pillars, not clasped by iron, but bound by faith! I say not that so vast a multitude is more ardent than fire, but if it consisted of one, you would not overcome that one.

You know what wounds the martyrs inflicted on you. Many a time a tender maiden has been brought into court. She was softer than wax, and she became harder than a rock. You tore her sides, yet you took not her faith. The body was being spent, the spirit was renewed. The physical frame was perishing, yet piety endured.

You have not conquered a single woman, and do you hope to conquer so numerous a people? Do you not hear the Lord saying, Wherever two or three are gathered together in My name, there I am in the midst of them? Where is not this people whom charity binds?

I have a proof of it. Am I in good heart by my own strength? I hold His written word. This is my staff, this is my courage, this is to me a calm harbor. Even if the world be troubled, I hold that written word; I look up to those words, they are a wall of strength to me.

What are they? I am with you always until the consummation of the world. Christ is with me, what shall I fear? If waves are raging against me, if the powerful rage against me, that’s less significant than a cobweb.

This is my tower of defense, this is my immutable rock, this is my sure staff. If this be God’s will, so be it. If He wish me to remain here, I am grateful to Him. Wherever it may be, I give Him thanks.