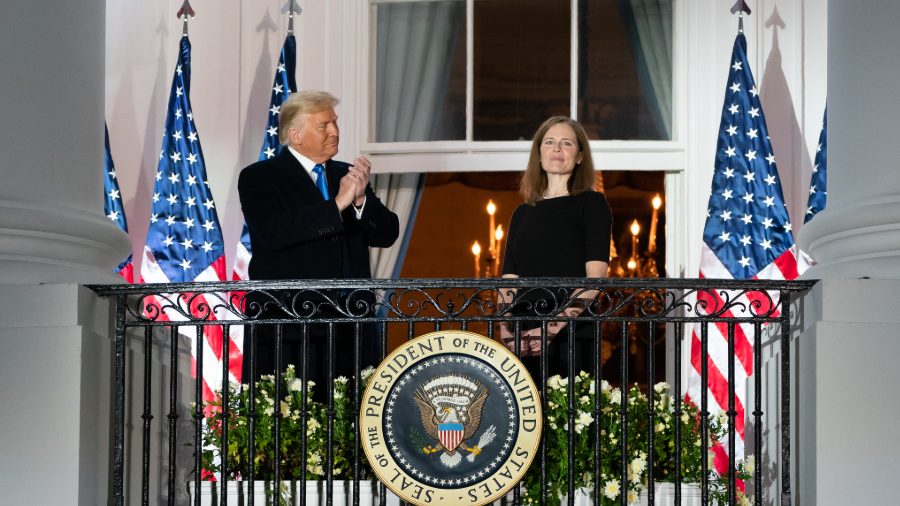 Amy Coney Barrett, fresh from a Senate confirmation vote, was sworn in Monday night as the Supreme Court’s newest justice at an outdoor ceremony at the White House.

The Senate, in a roll call that began just before 8 p.m., voted 52-48, mostly along party lines, to confirm Barrett as President Donald Trump’s third nominee to the high court.

Sen. Charles Grassley, R-Iowa, read off the vote tally, and announced: “The nomination of Amy Coney Barrett is confirmed.”

Republicans in the Senate chamber rose to their feet in applause.

Barrett, a judge on the U.S. Court of Appeals for the 7th Circuit since 2017, fills the vacancy left by the Sept. 18 death of Justice Ruth Bader Ginsburg. A conservative, she takes an originalist’s view of the Constitution in contrast to Ginsburg, a liberal icon.

Justice Clarence Thomas officiated as Barrett took the oath of office at the White House about 9:15 p.m. Thomas was a friend of the late Justice Antonin Scalia, for whom Barrett worked as a law clerk and who she considers her mentor.

“She is one of our nation’s most brilliant legal scholars. She will make an outstanding justice on the highest court in our land,” Trump said before Thomas swore in Barrett.

“The American people have been profoundly impressed to learn of her achievements, her compassion, her generosity, her faith, and her sterling character,” the president added. “Justice Barrett made clear she will issue rulings based on her faithful reading of the law and the Constitution as written, not legislation from the bench.”

After the swearing-in, Barret spoke briefly about how the confirmation process reflected her views about the differences between the government’s legislative and judicial branches.

It would be a dereliction of duty for her to give into them. Federal judges don’t stand for election. Thus they have no basis for claiming that their preferences reflect those of the people. This separation of duty from political preferences is what makes the judiciary distinct among the three branches of government.

A judge declares independence not only from Congress and the president, but also from the private beliefs that might otherwise move her. The judicial oath captures the essence of the judicial duty. The rule of law must always control.

The White House planned to be considerably more careful in staging the swearing-in ceremony than it was for the Sept. 26 event where Trump nominated Barrett.

Democrats tagged the earlier event as a “superspreader” of COVID-19. The president and first lady Melania Trump were among those in attendance who later tested positive for the disease caused by the new coronavirus.

In joining the high court, Barrett strengthens its bloc of conservative justices to six, in contrast to the liberal bloc of three.

Sen. Susan Collins, R-Maine, in a tough reelection race, was the only Republican to vote with Democrats to oppose Barrett’s confirmation.

Collins said she wanted to be consistent with her 2016 position of opposing a vote on President Barack Obama’s nomination of D.C. Circuit Judge Merrick Garland to the Supreme Court. At the time, Senate Republicans declined to hold hearings or vote on Obama’s pick eight months before that year’s presidential election.

Sen. Lisa Murkowski, R-Alaska, opposed the process of considering Barrett, arguing that Senate Republicans should be consistent with the earlier stand. However, Murkowski voted for Barrett because, she said, she did not oppose the nominee, only the process.

However, every Democrat on the committee boycotted the vote, allowing Barrett to win a unanimous vote only from Republicans, who all were present.

Democrats attempted to use a filibuster Sunday to block a vote on Monday through a procedural maneuver.

Barrett, besides being a 7th Circuit judge, has been a law professor at Notre Dame University, where she got her law degree and graduated first in her class in 1997.

Sen. Todd Young, R-Ind., said Barrett’s home state was proud on this day. In a speech on the Senate floor, Young said:

She will be the fifth woman and the first mother of school-age children to serve as a Supreme Court justice. She will also be the only current justice to have received a law degree from an esteemed law school other than Harvard or Yale. I will tell you, Hoosiers are extremely proud of Judge Amy Coney Barrett and the trail she has blazed for others.

Despite Senate Democrats’ repeated attempts to drag her into the political fray, Judge Barrett has proven she will make her decisions based on the law rather than politics. As a fellow Hoosier, I’ve had the privilege of getting to know Judge Barrett and her family over the last several years since she was nominated to fill a vacancy on the U.S. Court of Appeals for the 7th Circuit.

Senate Minority Leader Charles Schumer, D-N.Y., called the Senate confirmation vote on Barrett “one of the darkest days in the 231-year history of the United States Senate.”

“Let the record show that tonight, the Republican Senate majority decided to thwart the will of the people and confirm a lifetime appointment to the Supreme Court in the middle of a presidential election after more than 60 million Americans have voted,” Schumer said, adding:

Senate Majority Leader Mitch McConnell, R-Ky., has been praised by conservatives for shepherding to confirmation more than 200 Trump nominees for federal judgeships, including Supreme Court Justices Neil Gorsuch and Brett Kavanaugh before Barrett .

“By any objective standard, Judge Barrett deserves to be on the Supreme Court,” McConnell said.

Sen. Mitt Romney, R-Utah, who sometimes votes with Democrats, came to the floor early in the day to speak up for Barrett’s nomination.

Romney said Barrett’s credentials bring great respect to the Supreme Court as an institution, noting a growing lack of trust among Americans in the elected branches of government, both parties, law enforcement, and the media.

“It’s essential that the Supreme Court retain the trust of the nation,” Romney said. “That’s why Judge Barrett’s integrity, wisdom, and commitment to the rule of law is so important. … May God bless her and her family as they begin this chapter of service to our nation.”

However, Sen. Ron Wyden, D-Ore., faulted the process and Barrett for not answering enough questions on how she might rule on cases that could go before the high court.

“If the cure to COVID-19 was partisanship and rule-breaking, then Senate Republicans might be on to something with their low stunt on the high court,” Wyden said on the Senate floor, adding:

Amy Coney Barrett may have established herself as the Babe Ruth of saying pretty much nothing. Now, everybody pretty much understands that nominees typically clam up during these hearings. I don’t expect Judge Barrett to disavow Trump health care policy. I wouldn’t expect to agree with all of the Trump nominees’ positions. But unfortunate for our country, this hearing was a new low.

Ken McIntyre contributed to this report, which was updated shortly after it was published to include remarks at the swearing-in ceremony.