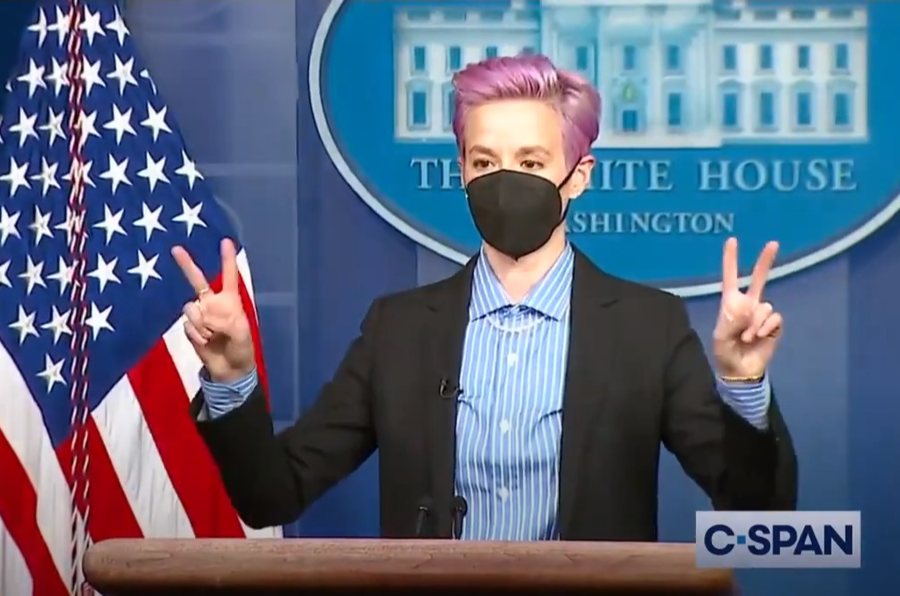 In the middle of a self-proclaimed economic crisis, President Joe Biden took to the bully pulpit to advocate not for the middle class but for those seeking to make millions kicking a ball.

That’s right, you were told to stay home, miss family holidays, not go to church, and deal with the economic fallout. You were told that things were so bad that the only hope was sending $2,000 (or $1,400) checks to Americans. Well, when it comes to some athletes, Biden wants a lot more than that.

Millionaire Rapinoe Speaks Out – She is “Devalued.”

This happened when Biden hosted outspoken far-left political activist and female soccer player Megan Rapinoe (who has an estimated net worth of $2 million) on March 24 for the signing of a proclamation for National Equal Pay Day. Millionaire Rapinoe took to the podium to speak down to America by saying:

She followed it up the next day on Good Morning America by saying, with regard to her male Olympic counterparts, “We won’t accept anything less than equal pay.”

There are real issues to solve in this country, and making millionaire soccer players richer is not one of them.

Well, for the last Olympics, where players were ostensibly representing their country out of patriotism, the women’s team made a whopping collective $221,000 per game, as opposed to $213,000 for the men. These rates were based on separate deals that both the men’s and women’s team individually negotiated themselves. They agreed to it, and the women actually got paid more.

They also received separate benefits that the men did not, such as paid maternity leave for one year. But facts never stand in the way of woke ideology.

An Airing of Grievances — From Professional Game Players

Her gripes don’t end with the Olympics, though. She and the woke left want all women’s professional sports (not just the Olympics) salaries to be artificially inflated to match the men’s. Bear in mind that the National Women’s Soccer League only exists because it is funded and it does not turn a profit.

Accompanying Rapinoe at the White House event was teammate Margaret Purce, who called for us taxpayers to fund all this:

When men began sports leagues, they were supported by billions in taxpayer subsidies. They were prioritized in media and afforded time to grow. The investment was great and the return was great. I have watched and joined a league of women who are remarkable at their craft, and together, we have asked for the same grace that was extended to men in the formative years of their leagues, true investment.

Yes, Purce and Rapinoe, with the full support of Joe and Jill Biden, lectured Americans on the noble purpose of giving money to professional athletes. This woke lecture was even more outlandish given that fewer Americans are watching sports because of this rampant wokeism.

It wasn’t exactly a proposal aimed at building the middle class that Biden promised. Quite the opposite, it was about building up a small group of elite, rich, and famous professional game players.

All of this is even more ridiculous given that soccer is probably the cheapest sport to play in the world. There isn’t an access issue with soccer. Children around the world in dire economic straits play it in the streets. All you really need is a ball.

There is no barrier to playing soccer on grounds of sex, let alone a justification for the White House to make it its priority to increase access. This is about paying people a lot of money to do something that some of us would do for fun or as a workout.

Rapinoe’s beef is simply that she wants more money for something people won’t pay her enough to do. The far-left agrees. Rapinoe wants to get richer playing a sport.

She wants you to be on the hook for that, to include:

…funding and resources, marketing and branding, and investing in, not just the players, but the support staff and coaching. And media, TV media, print media — all of it.

And You Get to Pay for It!

Where is that money going to come from? Judging by the views she showcased at the White House and in front of Congress, all roads lead to you, the taxpayer, consumer, and worker. These costs will be passed along to the rest of us by federal dictates.

The timing of her White House appearance was no accident. It was meant to build up the fanfare for congressional action. This Thursday, the House of Representatives will vote on the misnomered Paycheck Fairness Act.

According to analysis by The Heritage Foundation — and The Daily Signal is its multimedia news organization — the bill:

would allow employees to sue businesses that pay different workers different wages — even if those differences have nothing do with the employees’ sex. These lawsuits can be brought for unlimited damages, giving a windfall to trial lawyers.

Among other things, this bill would decrease workplace flexibility options and eliminate performance pay. To “equalize pay” on such rigid and unpractical lines means that the evolving and personalized work arrangements that often benefit women more than men — such as paid maternity leave, leave for a child’s doctor appointments and snow days, and teleworking arrangements — are all threatened.

The policymakers set to vote on this bill don’t even abide by these dictates for their own staff. In fact, to “equalize pay” on Capitol Hill would mean paying some categories of male staffers more.

This Problem is Simpler Than Politicians Care to Admit

For many, myself included, you probably couldn’t pay us to watch an entire game with Rapinoe, given her antics. Now Biden and the left want us to pay to not watch it so Rapinoe can get even richer. As far as this writer is concerned, Rapinoe can take her ball and go home.

There are real issues to solve in this country, and making millionaire soccer players richer is not one of them.

Mike Howell is senior adviser for executive branch relations at The Heritage Foundation. A lawyer, he previously worked in the general counsel’s office at the Department of Homeland Security and, before that, for the chief oversight committees of the House and Senate.