China has narrowed the technology gap with the United States, and in some instances has probably leapfrogged America’s military. 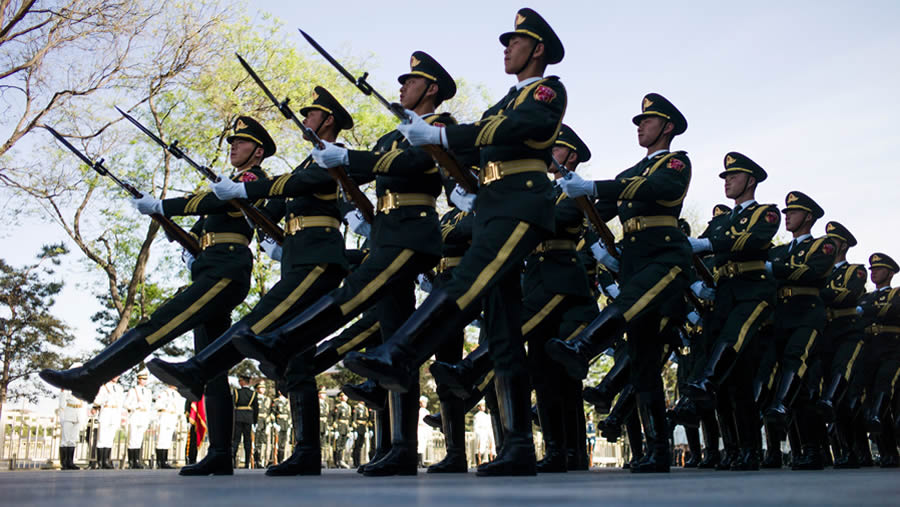 Members of a Chinese military honour guard prepare before a welcome ceremony with Chinese Premier Li Keqiang and New Zealand Prime Minister John Key at the Great Hall of the People in Beijing on April 18, 2016.

“Let us admit it fairly, as a business people should: We have had no end of a lesson: it will do us no end of good,” wrote Rudyard Kipling in 1902 after the Boers humiliated the British Army in the first round of the Boer War. America should express the same gratitude towards China, which has humiliated America in the South China Sea. By exposing American weakness without firing a shot, Beijing has taught Washington a lesson which the next administration should take to heart.

Last year I asked a ranking Pentagon planner what America would do about China’s ship-killer missiles, which reportedly can sink an aircraft carrier a couple of hundred miles from its coast. If China wants to deny the American navy access to the South China Sea, the official replied, we can do the same: persuade Japan to manufacture surface-to-ship missiles and station them in the Philippines.

It didn’t occur to Washington that the Philippines might not want to take on China. The country’s president-elect Rodrigo Duterte explained last year (as David Feith reported in the Wall Street Journal), “America would never die for us. If America cared, it would have sent its aircraft carriers and missile frigates the moment China started reclaiming land in contested territory, but no such thing happened … America is afraid to go to war. We’re better off making friends with China.” It isn’t only the Philippines who see the obvious. China claims the support of 40 countries for its position that territorial claims to the South China Sea should be resolved by direct negotiations between individual countries, rather than before a United Nations tribunal constituted under the UN Convention on Law of the Seas, as Washington wants. A joint statement by the foreign ministers of China, Russia and India after a meeting in Moscow last month supported China’s position.

The 7th Fleet was the eight-hundred-pound gorilla in the South China Sea after World War II, relying on a weapons system now more than nine decades old, namely the aircraft carrier. That was before China fielded its DF-21 “carrier killer” surface-to-ship missile. The latest iteration of the missile, designated DF-26, reportedly has a range of 2,500 miles. New technologies, including lasers and rail guns, might defeat the new Chinese missiles, but a great deal of investment would be required to make them practical, as a January report from the Center for Strategic and International Studies argued. The new generation of diesel-electric submarines first launched by Germany in the early 1980s, moreover, is quiet enough to evade sonar. Diesel electric subs “sank” American carriers in NATO exercises. Even without its surface-to-ship missiles, which can swamp existing defenses of US vessels, China’s stealth submarines can sink American carriers, and anything else that floats.

Perhaps a greater concern is the next generation of Russian air defense, the new S-500 anti-aircraft and anti-missile systems might make the American F-35 stealth fighter obsolete before it becomes operational. Writing in The National Interest, Dave Majumdar warns that the new Russian systems are “so capable that many US defense officials worry that even stealth warplanes like the F-22, F-35 and the B-2 might have problems overcoming them.” Pentagon officials think that the present generation of Russian anti-aircraft missiles embodied in the S-400 can overcome the jamming capabilities of existing F-16’s. Once Russia put a few S-400 systems on the back of trucks in Syria, it owned the skies over the Levant. The Pentagon doesn’t want to find out how good it is.

Russian commentator Andrei Akulov details the alleged superiority of the S-500, due for deployment next year:

The S-500 is expected to be much more capable than the current S-400 Triumph.

The S-500 is able to detect and simultaneously attack (as well as make speeds of up to 4.3 miles per second) up to ten ballistic missile warheads out at 600 km flying at speeds of twenty-three thousand feet per second.

Prometey can engage targets at altitudes of about 125 miles, including incoming ballistic missiles in space at ranges as great as 400 miles.

Akulov concludes, “It’s not often that a relatively inexpensive air defense weapon is able to make a trillion dollar fighter program obsolete. That’s exactly what the S-500 missile system will do to US brand new F-35 stealth fighter.” China and Russia have narrowed the technology gap with the United States, and in some instances have probably leapfrogged America’s military. In the past, the United States responded to such circumstances (for example the Russian Sputnik launch of 1957) by pouring resources into defense R&D at national laboratories, universities and private industries. Instead, Washington today is spending the lion’s share of a dwindling defense budget on systems that may not work at all.

At an estimated lifetime cost of $1.5 trillion, the F-35 is the costliest weapons system in American history. Even before a myriad of technical problems delayed its deployment, Pentagon planners warned that the flawed aircraft would degrade US defenses by consuming most of the Pentagon’s research and development budget. A still-classified report signed by several four-star generals was handed to President George W. Bush midway-through his second term warning of this baleful outcome. Bush ignored it. Former Air Force official Jed Babbin detailed the aircraft’s flaws in the Washington Times last year, concluding, “The F-35 program is an example of how weapons shouldn’t be bought. It needs to be stopped in its tracks.”

Those are the facts on the ground (as well as the air and sea). It’s not surprising that America’s allies in Asia want an accommodation with China. Nothing short of a Reaganesque effort to restore America’s technological edge will change this.