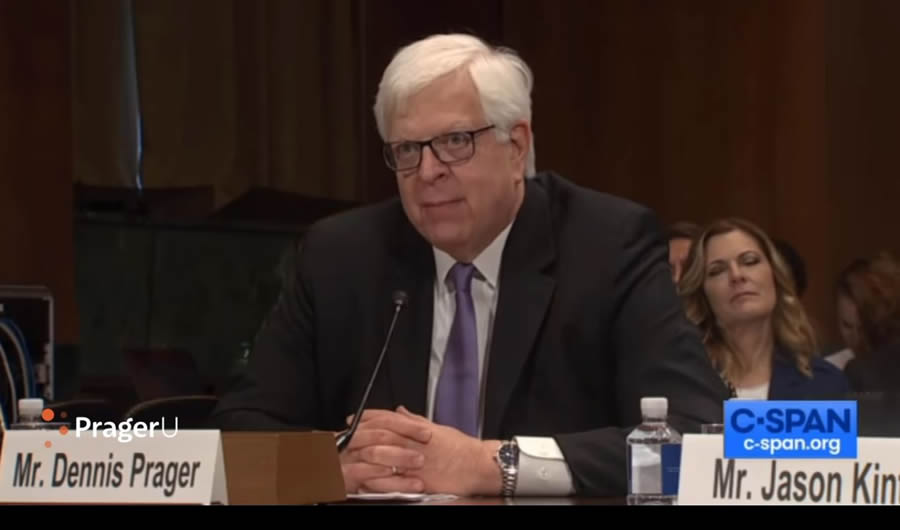 Last week, at the invitation of Sen. Ted Cruz, I spoke to the Senate Judiciary Committee about Google’s having placed more than 60 Prager University videos on its restricted list. Any family that filters out pornography and violence cannot see those particular videos on YouTube (which is owned by Google); nor can any school or library.

This statement is as much about what I and PragerU stand for as it is about Google. Those interested in viewing the presentation can do so here.

It is an honor to be invited to speak in the United States Senate. But I wish I were not so honored. Because the subject of this hearing — Google and YouTube’s (and for that matter, Twitter and Facebook’s) suppression of internet content on ideological grounds — threatens the future of America more than any external enemy.

In fact, never in American history has there been as strong a threat to freedom of speech as there is today.

Before addressing this, however, I think it important that you know a bit about me and the organization I co-founded, Prager University — PragerU, as it often referred to.

I was born in Brooklyn, New York. My late father, Max Prager, was a CPA and an Orthodox Jew who volunteered to serve in the U.S. Navy at the start of World War II. My father’s senior class thesis at the City College of New York was on anti-Semitism in America. Yet, despite his keen awareness of the subject, he believed that Jews living in America were the luckiest Jews to have ever lived.

He was right. Having taught Jewish history at Brooklyn College, written a book on anti-Semitism and fought Jew-hatred my whole life, I thank God for living in America.

It breaks my heart for them because contempt for one’s country leaves a terrible hole in one’s soul and because ungrateful people always become unhappy and angry people.

And it breaks my heart for America because no good country can survive when its people have contempt for it.

I have been communicating this appreciation of America for 35 years as a radio talk show host, the last 20 in national syndication with the Salem Radio Network — an organization that is a blessing in American life. One reason I started PragerU was to communicate America’s moral purpose and moral achievements, both to young Americans and to young people around the world. With a billion views a year, and with more than half of the viewers under age 35, PragerU has achieved some success.

My philosophy of life is easily summarized: God wants us to be good. Period. God without goodness is fanaticism and goodness without God will not long endure. Everything I and PragerU do emanates from belief in the importance of being a good person. That some label us extreme or “haters” only reflects on the character and the broken moral compass of those making such accusations. They are the haters and extremists.

Do you think the secretary-general of NATO; or the former prime ministers of Norway, Canada or Spain; or the late Charles Krauthammer; or Philip Hamburger, distinguished professor of law at Columbia Law School, would make a video for an extreme or hate-filled site? The idea is not only preposterous; it is a smear.

Yet, Google, which owns YouTube, has restricted access to 56 of our 320 five-minute videos and to other videos we produce. “Restricted” means families that have a filter to avoid pornography and violence cannot see that video. It also means that no school or library can show that video.

We have repeatedly asked Google why our videos are restricted. No explanation is ever given.

But of course, we know why: because they come from a conservative perspective.

Liberals and conservatives differ on many issues. But they have always agreed that free speech must be preserved. While the left has never supported free speech, liberals always have. I therefore appeal to liberals to join us in fighting on behalf of America’s crowning glory — free speech. Otherwise, I promise you, one day you will say, “First they came after conservatives, and I said nothing. And then they came after me. And there was no one left to speak up for me.”

The Leftist Contempt for Middle-Class Values