In Alien vs. Predator, I’m for Predator (Trump), Because He’s Our Predator 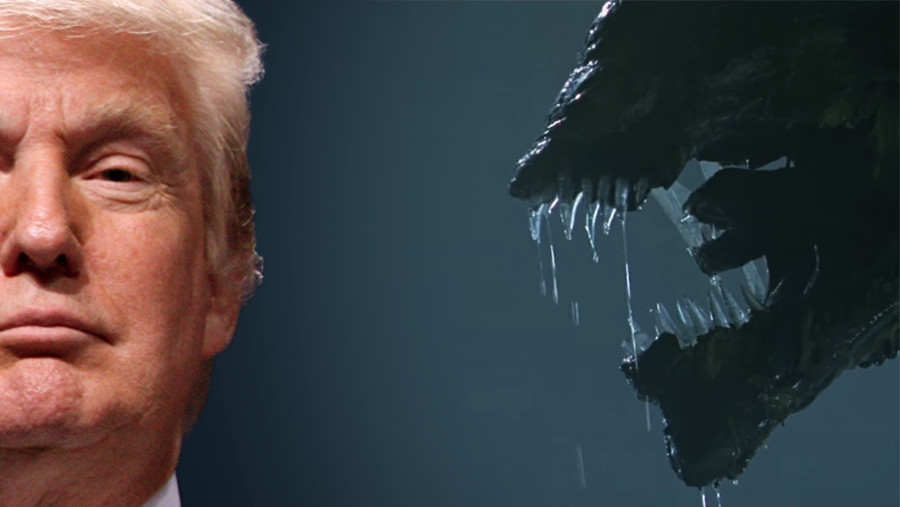 A fit of high dudgeon has gripped many of my Republican friends, ex-friends, and soon-to-be-ex-friends now that Donald Trump has all but won the Republican nomination. My advice to them: get over it. This presidential race will look like Alien vs. Predator. I’m for Predator, without a second’s hesitation, because he’s our Predator. For all his faults Donald Trump would be (and I’m confident will be) an incomparably better president.

I’m not pleased about the outcome of the primaries. I supported Ted Cruz and helped out in his campaign with economic research and news analysis. Yes, Trump is a vulgarian with poor impulse control. I don’t like him and find his vulgarity objectionable and his insulting remarks about Mexicans (for example) deplorable. The mother of my children is Mexican, and I take this sort of thing personally. If I ever have the opportunity I will give Trump a black eye.

But there’s a war on — three different wars, in fact. To remain neutral is moral cowardice; to choose the wrong side would be downright wicked.

First, there is a war on between Judeo-Christian principles and the political correctness inspired by the Frankfurt School and the French existentialists. Lunatics have seized control of our universities and have stamped out dissent with the zeal and vigilance of the Spanish Inquisition or the Taliban. The distinguished historian Paul Johnson said it best in a Forbes essay:

America has been a land of unrestricted comment on anything — until recently. Now the U.S. has been inundated with PC inquisitors, and PC poison is spreading worldwide in the Anglo zone. For these reasons it’s good news that Donald Trump is doing so well in the American political primaries. He is vulgar, abusive, nasty, rude, boorish and outrageous. He is also saying what he thinks and, more important, teaching Americans how to think for themselves again.

If the foxes haven’t yet seized control of the hen-house, they are running the hatchery. With the universities in the hands of the American Taliban, we can’t educate a new generation of Americans. Trump is a bitter antidote, but as Johnson argues, he may be the antidote we need. One might add that he’s the antidote we deserve.

Second, there is a war on between civilization and barbarism. Hillary Clinton says that Islam has nothing to do with terrorism. That’s partly her liberal ideology, partly a kowtow to the Arab donors who gave the Clinton Foundation $40 million. Hillary, in short, sells her virtue for both fun and profit. Donald Trump cut through the Gordian Knot of political correctness by proposing a temporary ban on ALL Muslim immigration into the United States, which an absolute majority of Americans supports. After some stumbles about acting as a neutral intermediary between Israel and the Palestinian Arabs, Trump has come down unambiguously on the side of Israel, supporting continued construction in the Judea and Samaria settlements (and that’s the acid test). It’s not just that Trump has a daughter who is a serious and observant convert to Judaism, and that he is surrounded by pro-Israeli advisers: he instinctively despises sniveling, backstabbing losers and likes tough, smart and determined winners.

Third, there is a war over the future of the American economy. Clinton promises more of the same slow suffocation of American enterprise that gave us eight years of under-performance from Obama. Trump offers a supply-side tax plan with a 15% top corporate rate. My old friend and former colleague Lawrence Kudlow thinks it would be a huge improvement, and I agree.

One, two, three. These are the existential issues facing America: our culture, our safety and our prosperity, and Trump is on the right side of all of them. Well, mainly on the right side: his meandering on the abortion issue outrages religious conservatives like the brilliant Catholic writer Joseph Bottum, a friend and former colleague at First Things magazine. Social conservatives feel offended by his offer to let Caitlin Jenner use the ladies’ room at Trump Tower. Trump isn’t a social conservative. But those issues are not the purview of the presidency, but rather of the legislature and the courts. Who do you want to appoint the next Supreme Court justices — Trump or Hillary Clinton?

There is also the matter of Clinton corruption on the grand scale, in particular the use of the Clinton Foundation to solicit hundreds of millions of dollars of donations from despicable Third World kleptocrats and their cronies. Peter Schweitzer’s book Clinton Cash shows that Bill and Hillary are the worst scoundrels ever to crawl out of the cesspool of American politics. What enrages me is not merely their thievery but their sociopathy: They like flaunting the rules, just to show that they can get away with anything. Hillary won’t get away with my vote, not unless Hitler or Goebbels were to rise from the grave and run for president against her. Goering, I’d have to think about.

Then there’s the matter of foreign policy. Trump is dismissive of NATO and inordinately appreciative of Russian President Vladimir Putin. It’s a matter of priorities. Writing in the New York Times May 5, David Sanger and Jim Yardley made this noteworthy observation about China’s response to Trump:

In China, a frequent target of Mr. Trump’s criticism, he is widely viewed as a pragmatist who is less hawkish and less focused on human rights than Mrs. Clinton is.

His proposal to impose high taxes on Chinese goods receives little attention there, and his talk of China’s “raping” the United States in unfair trade deals has been met with shrugs, as if to say that charge is nothing new. Instead, the conversation focuses on Mr. Trump’s business success or his pronouncements on preventing foreign Muslims from entering the United States, an attitude that jibes with the antipathy in much of China toward the Muslim population in the western province of Xinjiang.

Radical Islam is an existential threat to Russia and China, who live in fear that the United States will once again back jihadists to destabilize them, as we did during the Cold War, when the Reagan administration armed Afghani jihadists against their Russian occupiers. One in seven Russians is Muslim. For the past dozen years the American foreign policy Punditeska has proclaimed that Russia would collapse of its own demographic weight. That was calamitously wrong, as I warned. Russia is the last redoubt of the nasty old European nationalism that gave us so much conflict in the past. It is not a revived Soviet empire seeking to conquer the world, but a come-from-behind spoiler, burning with resentment at its would-be relegation to the scrapheap of former great powers. Nonetheless, jihadism is infinitely more important to Moscow than its border with the Baltic States.

Mitt Romney was wrong. Russia isn’t the biggest threat to the United States. Russia doesn’t want to destroy us. It wants to gain influence and power at our expense. Radical Islam is the biggest threat to the United States. Radical Islam wants to destroy us. I’m for collaborating with Russia against radical Islam where convenient and thwarting Russia in other matters where it suits us. We have a lot of conflicting interests and some common interests. The right way to deal with Russia is case-by-case. As for NATO: Germany is swimming in tax revenues, but won’t spend enough on defense to keep more than one out of four of its fighter aircraft in service at any given moment. I’m for a strong NATO, but we don’t have one and can’t get one whether we want it or not.

Trump says he’ll rebuild the US military and our missile defense in particular, but avoid committing US forces overseas. The neo-conservatives will never forgive him for this. It means that they are out of a job, and when they say that Trump means “the end of the Republican Party,” they mean the end of the Republican Party that used to employ them. Robert Kagan and Max Boot have gone to the Clinton camp.

A Trump presidency almost certain means that Chinese and Russian influence will grow faster and with fewer obstacles than it might have otherwise. That is not entirely a bad thing: the West is too squeamish to deal with the monstrous mess that radical Islam has created. I am not comfortable with Trump’s isolationism. If he rebuilds America’s military prowess (and especially our missile defenses), as he proposes to do, other errors can be fixed. If we don’t restore our military power, nothing else we do will matter. Can you imagine Hillary Clinton rebuilding the American military?

To those who abandon the Republican Party in this hour of crisis, I say: Good riddance! Go now, and never come back. Your bad advice and dogmatic arrogance brought America from a lone pinnacle of greatness in 2001 to second-rate status in 2016, the fastest decline of a dominant power since Napoleon invaded Russia. Go pester the Democrats, and do as much damage to them as you did to us Republicans.

Reprinted with permission of the author. Originally published May 11 at PJ Media. For an argument for being “Never Trump,” see Joshua Charles’ Why Am I “Never Trump”? The Third Commandment.