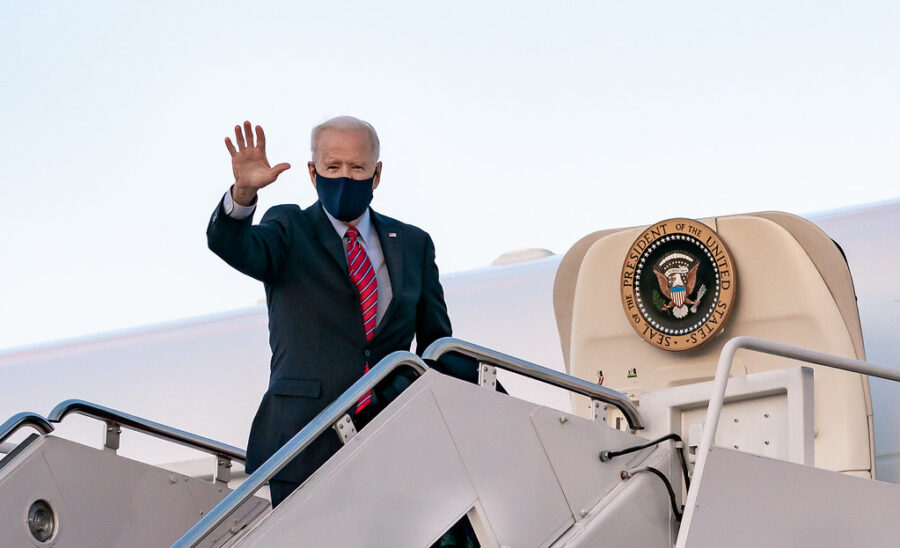 In a bold act of defiance against the Taliban, hundreds of Afghan women took to the streets of Kabul last Tuesday morning, demanding that the Taliban respect their rights. Taliban fighters beat them with sticks and rifles in response. Validating the fears of Afghan women’s rights activists, the Taliban seems to be showing its true colors after initially attempting to reassure the world it would respect human rights.

This is happening as President Biden denounces the U.S. Supreme Court’s decision to leave a Texas pro-life law — that protects an unborn child from abortion after a heartbeat is detected — in place and touts his own concern for women’s rights. In a statement, Biden said the situation in Texas is an example of why he decided to create a Gender Policy Council “to be prepared to react to such assaults on women’s rights.”

Biden can pretend to care about women’s rights, but that’s rich coming from the president who just triggered the most significant women’s rights crisis of our time in Afghanistan.

Taliban Spokesman Warned That Women Should Stay Inside Their Homes

In the 1990s, the Taliban regime was notoriously oppressive for women and girls. With President Biden’s ineptly managed withdrawal and the Taliban’s sudden return, women have been sent back to the dark ages of Taliban rule. Many young women and girls who grew up in a democratic Afghanistan will be experiencing those dark ages for the first time.

The Taliban’s takeover of Afghanistan perfectly demonstrates what an assault on women’s rights really looks like.

Physical danger to Afghan women is great. Taliban spokesman Zabiullah Mujahid recently warned that women should stay inside their homes since Taliban fighters “have not been yet trained” to respect women. And the targeting of women has already begun.

Well-known Afghan journalist Beheshta Arghand has already fled the country, afraid for her life. She said, “When a group of people don’t accept you as a human, they have some picture in their mind of you, it’s very difficult.” The Taliban has already been accused of murdering a pregnant policewoman. Other Afghan women who have achieved career success are afraid of being similarly punished by the Taliban.

The Taliban promised that women “will be given all their rights within Sharia ‘the Islamic laws.’” Unfortunately, the Taliban’s interpretation of Sharia law in the 1990s meant that women could not leave their homes without a male guardian, most women could not work outside the home, and girls could not even go to school or play sports.

Knowing the risks, many Afghan women have already stopped going to work, even though the Taliban promised women could work. Supposedly, recent measures which sent women home from work in parts of Afghanistan are temporary. However, Taliban requests for women to stay home after they seized power in Afghanistan 25 years ago were said to be temporary then, too. But it wasn’t temporary; it was the new reality.

The Afghans who fled to Kabul from other areas already held by the Taliban reported that Taliban fighters were forcing families to hand over unmarried women to become wives for the fighters. Some young women went into hiding as fighters searched houses, looking for victims to be used as sex slaves.

The Taliban’s takeover of Afghanistan perfectly demonstrates what an assault on women’s rights really looks like.

Not a Women’s Rights Hero

The Taliban takeover is a worst-case scenario for Afghan women, and they are devastated. Small groups of women have staged protests demanding basic rights. But few will be so bold, and most will mourn silently.

The ongoing work to secure women’s rights in Afghanistan was well-known to American foreign policy leaders and human rights experts. Some had spent years working to improve the plight of Afghan women. So, it should not come as a surprise for the administration — or Biden himself — that women now face an impossible situation in Afghanistan. Yet, Biden’s hasty and careless withdrawal seems not to have taken women into account.

Caring about women’s rights means caring about women’s education, opportunities, equal treatment, and fundamental right to life. The situation unfolding in Afghanistan over the past few weeks proves Biden cares about none of that. If Biden wants to promote the “right” to kill unborn children in Texas, he can. But he cannot act like he is a women’s rights hero while doing so.

Protecting innocent children in the womb after they develop a heartbeat — which is what Texas’ new law does — is not a threat to women’s rights. Joe Biden’s policies, on the other hand, are.