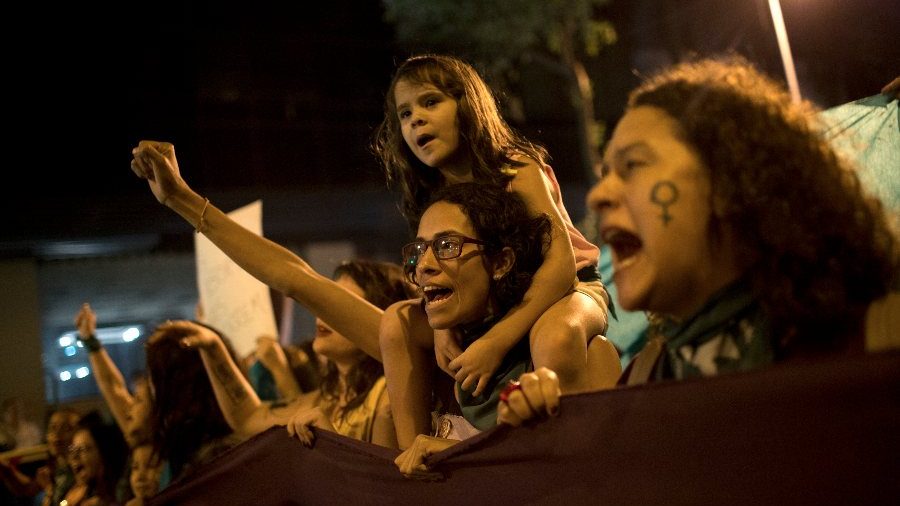 In this June 22, 2018, file photo, women chant during a protest demanding the legalization of abortion without exception, in Rio de Janeiro, Brazil. Abortion is illegal in Brazil, except when a woman's life is at risk, when she has been raped or when the fetus has a usually fatal brain abnormality called anencephaly.

University of Brasília professor of anthropology Debora Diniz is in hiding until a hearing Friday, The Guardian reported. The professor is a leading feminist campaigner and had a large hand in pushing legislation seeking to legalize abortion in Brazil.

“We are in a new moment,” Diniz told The Guardian. “It could change the criminalisation of abortion in the country, and that is why it is so important,” she added. Diniz alleges she received threats on Facebook and WhatsApp, an instant message app that allows free communication internationally.

Police will escort Diniz to Friday’s two-day hearing on a bill proposing the decriminalization of abortion.

The hearing, which will start Friday and resume Monday, comes at the request of Supreme Court judge Rosa Weber. A number of doctors, government officials, religious organizations and advocacy groups will speak at the hearing.

“This whole problem of abortion being illegal and criminalised is very sad,” obstetrician-gynaecologist Leila Katz said, The Guardian reported.

Abortion is illegal in Brazil, except in cases of rape, where the mother’s life is in danger and if the fetus has anencephaly — a condition where the baby is born missing part of the brain and dies shortly thereafter. Women who have abortions face up to three years in prison while doctors who perform abortions can receive four years.

The hearing comes after a Brazilian congressional committee voted in November 2017 to prohibit all abortions in the nation without exception.

“To defend abortion, like it or not, is a Satanic, diabolical and destructive act,” Evangelical Congressman Pastor Eurico told the committee. The committee voted in an overwhelming 18-1 vote to ban all abortions, according to Reuters.

Brazilian protesters took to the streets of Rio de Janeiro and Sao Paulo shortly after the committee’s vote wearing war paint and chanting loudly to protest a proposed ban on abortions in the country. “Our bodies are ours!” the crowds yelled, according to The Associated Press.

Argentina’s Senate will debate whether to pass the legislation on Aug. 8.