By Peter Hasson and Spencer Landis Published on August 13, 2020 •

The Youth Liberation Front is credited with organizing protests in Portland last week that extended into the early morning hours and turned violent, The Seattle Times and the Associated Press have reported. Portland police declared riots on multiple nights throughout the week.

The radical group’s goals extend far beyond changing policies and even beyond abolishing the police, as noted in a July 8 tweet: “we don’t want to be led, and we don’t want to lead, we just want to destroy the United States of America.”

“Abolish the United States of America,” the group wrote on Twitter in October. YLF has more than 32,000 followers on the social media platform.

Abolish the United States of America

“Members of our group report that watching the senate hearing on Antifa was very inspiring. Countless times the movement was referred to as being well organized, and it was conceded that ‘they are winning’ on various occasions. We will succeed in abolishing amerikkka!” YLF wrote on Twitter on Aug. 4, following a Senate hearing on Antifa violence.

Members of our group report that watching the senate hearing on Antifa was very inspiring. Countless times the movement was referred to as being well organized, and it was conceded that “they are winning” on various occasions. We will succeed in abolishing amerikkka!🖤💞

A July 25 tweet from the group cheered agitators in Seattle who set fire to trailers at a proposed juvenile detention center. “Seattle starting off the day strong!” the tweet said. “Let’s keep this energy up tonight, Portland!” 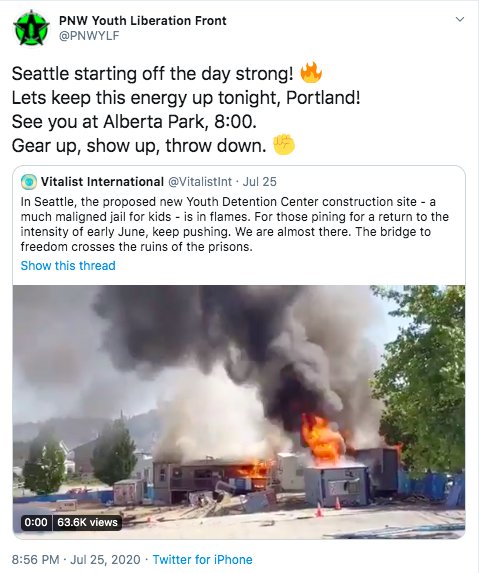 When some members of a crowd at a June 2 protest booed the burning of the American flag, the group tweeted: “If you are booing someone burning a symbol of white supremacy and state violence at a protest against white supremacist state violence, what the f— is wrong with you?”

The group on July 23 tweeted instructions to burn American flags if anyone was seen waving them. “If you see someone waving an American flag… burn it,” the group wrote.

YLF has denounced those who seek to keep protests peaceful.

“To all the people on the streets who call themselves ‘peaceful protesters’. I don’t know where you’ve been for the past 4+ years, but being peaceful doesn’t stop the police, how do I know this? Because people have been doing this for years before you hopped on the protest trend,” the group wrote in a June 6 tweet.

“The pigs are in a PR battle so they say there’s a difference from ‘peaceful’ and ‘violent’ protesters. When in fact what we are fighting is the ultimate form of violence, making any and all resistance self and community defense,” the group added.

“If you’re gonna use violence to police other protestors, our fight is just as much with you as it is with the cops on uniform; you just do that s— for free. The pigs don’t need any help,” the group wrote on Twitter on July 4.

The tweet included an image that read: “Peace police are police.”

The group’s members describe themselves as predominantly made up of teenagers.

“We’re a bunch of teenagers armed with ADHD and yerba mate— we can take a 5 AM raid and be back on our feet a few hours later. We f—-d around a bit, found some s— out, and we’ll be back again and again and again, until every prison is reduced to ashes and every wall to rubble,” YLF wrote in a June 18 tweet.

“So our soft age range right now is 14 to about 25,” one YLF member said on an anarchist podcast in October.

“We have members that are older than youth, but who are still in like the same schools as youth and stuff like that who are in like community colleges with other youth members of the YLF who are like specifically facing a lot of the same issues that the YLF are facing,” the member added.

“We are aware of this group, however we do not assign actions to a group. We will take action against individuals when we have probable cause that they have committed a crime,” Sergeant Kevin Allen of the Portland Police Department told the Daily Caller News Foundation in an email.