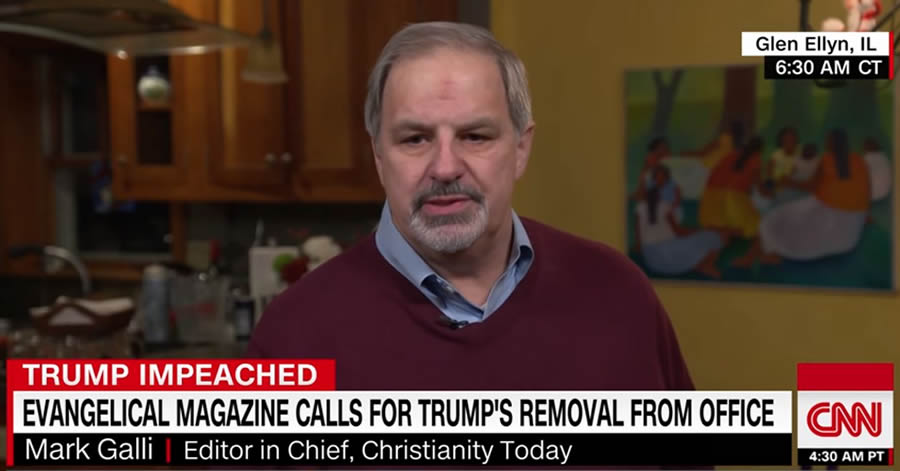 The editor-in-chief of Christianity Today, Mark Galli, wrote an editorial calling for the impeachment of President Donald Trump.

In my view, this editorial only serves to confirm one of the sadder realizations of my life: that religious conviction guarantees neither moral clarity nor common sense.

The gist of the editorial — and of most religious and conservative opposition to President Trump — is that any good the president has done is dwarfed by his character defects.

This is an amoral view that says more about Galli than it does about the president. He and the people who share his opinion are making the following statement: No matter how much good this president does, it is less important than his character flaws.

Why is This Wrong?

First, because it devalues policies that benefit millions of people.

And second, because it is a simplistic view of character.

I do not know how to assess a person’s character — including my own — outside of how one’s actions affect others. Since I agree with almost all of President Trump’s actions as president and believe they have positively affected millions of people, I have to conclude that as president, Trump thus far has been a man of particularly good character.

Of course, if you think his policies have harmed millions of people, you will assess his character negatively. But that is not what never-Trump conservatives or Christians such as the Christianity Today editor-in-chief argue. They argue that his policies have indeed helped America (and even the world), but this fact is far less significant than his character.

In the words of Galli: “(I)t’s time to call a spade a spade, to say that no matter how many hands we win in this political poker game, we are playing with a stacked deck of gross immorality and ethical incompetence.”

This rhetorical sleight of hand reflects poorly on Galli’s intellectual and moral honesty.

This is simply wrong.

So, permit me to inform Galli and all the other people who consider themselves conservative and/or Christian that our support for the president is entirely moral.

The Decline of Christian Moral Thought

Yet, none of these things matter to Galli and other misguided Christians and conservatives. What matters more to them is Trump’s occasional crude language and intemperate tweets, what he said about women in a private conversation and his having committed adultery.

Regarding adultery, that sin is for spouses and God to judge. There is no connection between marital sexual fidelity and moral leadership. I wish there were. And as regards the Access Hollywood tape, every religious person, indeed every thinking person, should understand that there is no connection between what people say privately and their ability to be a moral leader. That’s why I wrote a column for the Wall Street Journal 20 years ago defending Hillary Clinton when she was charged with having privately expressed anti-Semitic sentiments.

That the editor of Christianity Today thinks the president’s personal flaws, whatever they might be, are more important than all the good he has done for conservatives, for Christians, for Jews, for blacks and for America tells us a lot … about Galli and the decline of Christian moral thought.

Growing Up to Be Good is More Important Than Career