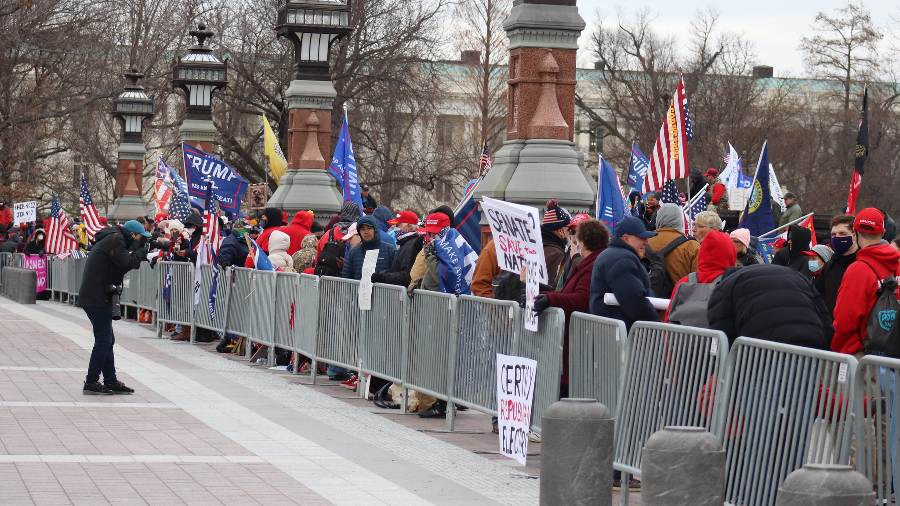 In this January 6, 2021, file photo, protesters gather at the U.S. Capitol in Washington, D.C.

Not unlike the cry of “Russia! Russia! Russia!” that haunted President Donald Trump throughout all four years of his presidency, the new rallying cry for the Democrats leading into the 2022 election (and beyond, no doubt) is the charge that those who continue to support President Trump — and pretty much anyone who doesn’t strongly, vocally condemn him — will be labeled an insurrectionist. And naturally anyone running for office who might gain the backing of Trump will be tagged with the same Scarlet Letter “I” and vilified incessantly via every facet at the disposal of the mainstream media.

But why did the events of January 6, 2021, in Washington, D.C., get so blown out of proportion in the first place? Why has the current “official” investigation, much ballyhooed by members of Congress, turned out to be several ounces shy of a “nothing burger”? (A “nothing slider,” as Eric Metaxas might say.)

Could it be that Saul Alinsky, in his famous list of “Rules for Radicals” (as well as tactics employed by Hitler’s chief propagandist, Joseph Goebbels), gives us a clue?

Inculcate People Against the Evidence

Accuse your opponent of what you yourself are doing, to create confusion and to inculcate people against evidence of your own guilt.

I mean, if the opposite had been the case, if it had been the Left’s own brigade of rabble-rousers that had descended upon D.C. that day, there to protest the fact that Donald Trump’s team had stolen the election based on what was plain to see — i.e., vote tabulation screeching to a halt in just the swing states necessary for Trump’s victory; then, during three days of renewed counting, the mysterious appearance of tens of thousands of votes exclusively for Trump; followed quickly by the press announcing that Trump, much to their chagrin, was the new “Comeback Kid,” and anyone doubting Trump’s victory would be labeled a conspiracy theorist — the MSM would have called the ensuing kerfuffle within the Capitol walls “a mostly-peaceful protest.” And you know what? They would have finally gotten one right.

The Democratic Left, with many enablers in the Rollover Republican Party, co-opted the insurrection narrative and proceeded to instruct America at large that a violent insurrection was championed by nefarious Trump supporters.

On January 6, 2021, certainly an almost-all peaceful Trump Rally was playing out in Washington, all the way up until a few instigators (some later identified with connections to the FBI) roused the crowd near the steps of the Capitol and, with the happy compliance of some of the Capitol police swinging back the flimsy aluminum gates, entered the hallowed grounds of our nation’s highest seat of power. This happened, of course, on the very day that Congress was seated, full slate, charged with ratifying the Electoral College vote.

On the floor of Congress that day was strong dissent from an albeit small percentage of senators who politely and respectfully asked that this august group of representatives take a mere two weeks before the upcoming inauguration to investigate strong allegations that the 2020 presidential election was, well, more than a wee bit hinky.

It wasn’t long after Senator Ted Cruz’s persuasive speech asking for an investigation that the whole procedure was suddenly shut down as the curtain went up on the amateur-hour theater that would too-soon be deemed worse than Pearl Harbor and 9/11 combined.

What was Senator Cruz proposing? What was so dangerous about his suggestion? Two weeks to look into credible evidence of fraud of national significance was not, say, four years taking a deep-dive into Russian influence of the previous president and his election the first time around.

The problem for the Left, however, was “focus.” Surely the country could spend a scant two weeks focused on the alleged 2020 election discrepancies which included over a thousand affidavits of eye witnesses to fraud. Sure, what could it hurt to humiliate Trump supporters by proving to these rubes that this was indeed “the most secure election in history”? Let’s go for it!

Or the Democrats could steal a page from the Jussie Smollett playbook. If you can’t get the Trump supporters to commit crazy violence, then you’ve got to create the illusion that these grandmas and churchy “prayer warriors” and guys who dress up in throwback tri-cornered hats and buffalo-skinned jackets-with-tassels are even crazier than they look. You have to give BLM and Antifa a run for their money with this ragtag group. Get the party started with your own operatives; continue to play offense; cry “Insurrection!” Then, who will blame you if you point out that without any sort of investigation you are able to state emphatically that you found zero evidence of election fraud — and spend the next two weeks bringing yet another charge of impeachment against the soon-to-be-shown-the-door current sitting president.

In short, the Democratic Left, with many enablers in the Rollover Republican Party, co-opted the insurrection narrative and proceeded to instruct America at large that a violent insurrection was championed by nefarious Trump supporters.

Which on the face of it is truly odd.

If you want to overthrow a government, which of these two rallying cries would you use? “Make America Great Again!” or “Fundamentally Transform America!”

The first is positive, optimistic, and uplifting — and implies building, not tearing down, the country that’s already here.

The second talks about a fundamental change, and inherent in that word is the concept of foundational. Meriam-Webster.com says the “essential meaning” of fundamental is this: “[F]orming or relating to the most important part of something … relating to the basic structure or function of something.” And provides this example: “The Constitution ensures our fundamental rights.”

So, would an insurrectionist be more interested in ensuring our fundamental rights? Or transforming them?

Put another way: if you truly want to fundamentally transform your house, you need to tear it down to get to its foundation. From there you can lay a new foundation and build whatever house you want, bigger or smaller — or no house at all. You can still call it the same place if you want — after all, whatever is there (or isn’t there) still occupies the same space. But, it’s certainly not the same house that was there previously.

The Rally Cry of ‘Insurrection!’

From all appearances, with so much going haywire this past year with the attack on our basic rights and freedoms, it seems we are now living in that “fundamentally transformed America” of which candidate Barack Obama spoke back in 2008. And we got here by way of a mostly peaceful insurrection that many might say actually happened in early November 2020, not early January 2021.

Albin Sadar is producer of The Eric Metaxas Show, heard daily on over 300 stations coast to coast on the Salem Radio Network.