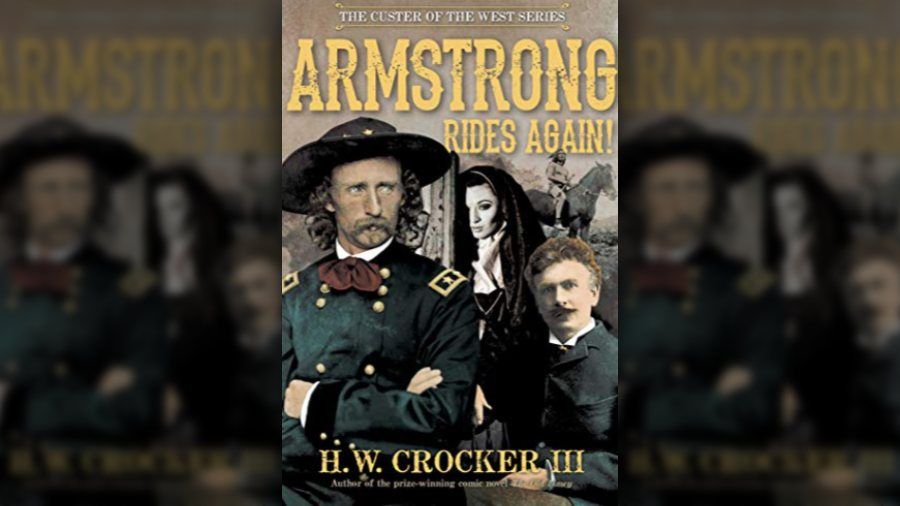 It’s been a rough year, to say the least, with a global pandemic, the election of the most dangerous, leftist presidential administration ever, and a media and institutional elite in this country who are essentially Marxist functionaries.

Summer and beach reading might provide some needed relief. But before you pack your bags and head to the sun and the sand, here’s a recommendation for a fun book to take along.

It’s a western like no other (except maybe its prequel, Armstrong, which I read and much enjoyed a couple of years ago). Written by H.W. Crocker III, it’s called Armstrong Rides Again! and it imagines the continuing adventures of George Armstrong Custer after he survived the Battle of the Little Bighorn and became an incognito marshal and soldier of fortune.

In this tale, he meets up with a few real-life characters such as Black Bart and Ambrose Bierce and gets involved in an entirely make-believe Latin American civil war. The book is action-packed — a real page turner — and hilarious at the same time.

Not only does this book provide recreational distraction from deeply troubling headlines and the cares of the day but it has, beneath the surface, a surprisingly deep and affirming conservative message — one that doesn’t interfere with its entertainment value. If anything, it adds to it, because you know the author is on your side. (I know this for certain because, full disclosure, Harry Crocker is a friend of mine.)

Armstrong was great, but Armstrong Rides Again! is one of those cases where the sequel is even better. In Armstrong, the conservative themes were subtler; here, they are more direct, but in an amusing way, as in the comical monologues of the ruler of the imaginary Latin American country.

There’s a lot in this book about the nature of a just government, loyalty, religion, the fetishization of “science” (what could be more timely?), the hypocrisy and self-serving nature of the liberal establishment, the essential importance of history and patriotism — all as retold by our incomparably courageous narrator, George Armstrong Custer, who battles American Indians, revolutionaries and spies with equal aplomb while matching wits with his own on-again, off-again ally: the sardonic, skeptical martial Ambrose Bierce.

You’ll also meet a priest who designs submarines; a former Confederate officer-turned-federal agent; a multilingual, theologically minded American Indian scout; a suave, villainous turncoat whom the modern reader might liken to certain modern-day “principled conservatives”; and, of course, the Latin American ruler El Caudillo. Picture Donald Trump as the head of a Latin American monarchy and you might get some idea of what the character is like; he’s the man whose counterrevolutionary cause Custer joins.

Quotable Quotes and Things That Matter

The book, written as a letter to Custer’s wife, Libbie, is endlessly quotable, but perhaps these opening paragraphs will be enough to entice you: “I write this from a study with a window overlooking the ships in San Francisco Bay. Beside me, smoking a cigar and criticizing my every word, is Major Ambrose Bierce, the journalist. He would rather tell this tale himself — he is the professional writer after all — but as you know, dearest Libbie, I can turn a handsome phrase myself, and this is our tale, Bierce’s and mine, and would not have happened had we not crossed paths (and swords), and I can tell it plainly, unadorned by journalistic exaggeration.

“My last letter chronicled how I liberated Bloody Gulch, Montana — and a fine, rousing story it was. But it left you hanging precipitously wondering what happened next. Now I can tell you.

“I had to flee. The U.S. Cavalry was on its way — and much as I love the Cavalry, I had to preserve my anonymity. A sorrowing world believes I am dead, and I cannot disabuse it of that mournful conclusion until I can prove that my men and I were betrayed into catastrophe at the Little Bighorn.”

Who could stop reading after that! Do yourself a favor. Buy this book; let it entertain you while reminding you of the things that matter most in life; and pass it along to your older kids. They’ll get a kick out of it, too. As Andrew Breitbart famously said, “Politics is downstream from culture.” Isn’t it nice to have some popular culture of our own for a change? Thank you, Harry. Long may Armstrong ride!