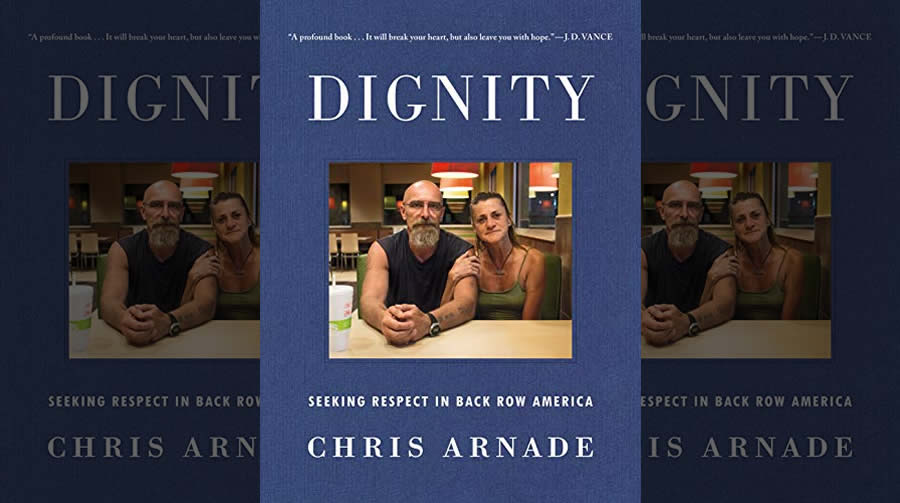 “When you are told all your life you’re dumb, unworthy, you start believing it. God changed that for me.”

Jerry, from Youngstown, Tennessee, hesitated to be interviewed by Chris Arnade, because “I don’t know my ABCs, so I can’t really talk right.” He told Arnade, the author of the new book Dignity: Seeing Respect in Back Row America: “I got nothing of worth to say, not anything anybody would want to read about.” Arnade talks him into it, suggesting his views might be of worth to others.

Jerry was raised “dirt poor” in a military family, “the son of parents who married and divorced three times. His father was abusive and didn’t provide.” He tells Arnade that one month all the family ate was cake mix, because those were the leftovers his father managed to bring home.

“I was always called dumb by everyone, my teachers, other students. Pretty soon I dropped out of school … I made it the only way I knew how, with my body. But you know what they say: the harder you work, the less you make.”

Arnade writes of Jerry: “He lives on a small plot of land in a valley far from most things, in a home held together by attachments and additions he built himself. His wife is confined to a bed off the living room, disabled from years of illness. He spends much of his time caring for her or driving her from appointments ….” Arnade describes Jerry as “a big man” who “moves slowly, hobbled from injuries and pain from a lifetime of manual labor. The worst pain is from a broken neck when he fell from a ladder that ended most of the work he could do.” The injury meant he was prescribed pain pills “and then, when doctors cut his prescription, buying heroin.”

Worthy of the Lord

Jerry is grateful for his religious faith. “I got saved at 50,” he tells Arnade. “I had never felt worthy before of being saved. I was too dumb. Now I understand I am worthy of the Lord.”

Arnade is a former Wall Street trader who started walking in a part of the Bronx he had been warned against. He eventually would get in his car and travel to similar places around the country. One of the things he found there was a sustaining faith.

After attending “hundreds of different (religious) services” he “couldn’t ignore the value in faith.” At first, he saw it as a “utility,” but he soon realized “there was more to it than that. My biases, my years steeped in rationality and privilege, (were) limiting a deeper understanding.” Perhaps, he writes, “religion was right, or at least as right as anything could be.” But, he admits, “Getting there requires a level of intellectual humility that I am not sure I have” — which to me sounds a little bit like humility.

As opposed to his life of insulated privilege, Arnade found a starker reality in the communities he writes about. “You cannot ignore death there, and you cannot ignore human fallibility. … It is far easier to recognize that one must come to peace with the idea that we don’t and never will have this under control.” He adds, “It is far easier to see religion not just as useful but as true.”

There’s something Arnade encountered on the streets that captures our shared humanity. At a time of wall-building, Arnade scales some barriers and finds hope in the midst of tremendous pain. He finds people trying their best, in some of the harshest circumstances. All proceeds from Dignity are going to groups helping people with addiction and homelessness, and to some of the hard-luck people portrayed in its pages.

The world is better today because of Chris Arnade’s work, and you can improve your world by reading it and looking into the eyes of the people who opened their hearts and lives to him. You may also find some of the faith, hope and love you need today.