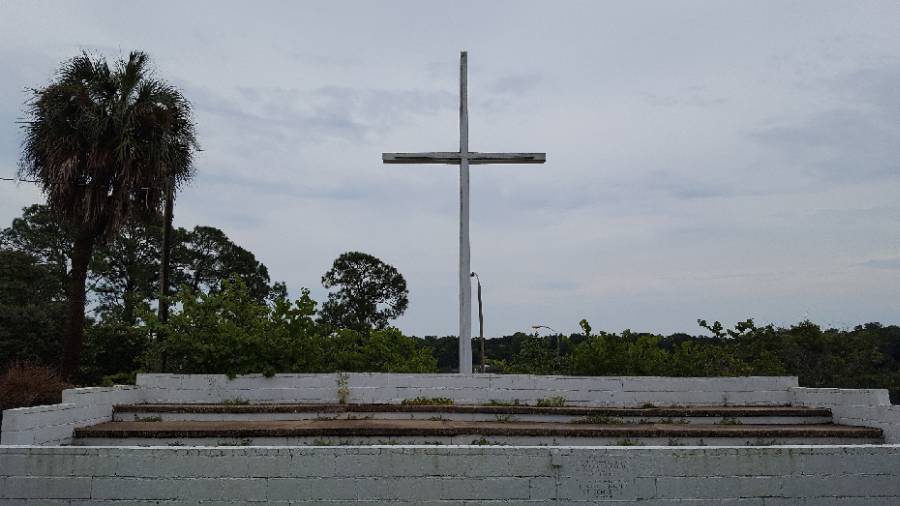 The cross in Bayview Park, Pensacola, Florida. After a protracted legal battle, the cross can stay where it is.

A failed congressional candidate, her husband, and a satanist walked into a Florida park and saw a 34-foot-tall cross that had stood undisturbed for 75 years.

This sounds like the beginning of a bad joke, but unfortunately it was the beginning of a federal lawsuit. At this point, the case has lasted more than four years, been litigated at every level of the federal courts, and even gone to the Supreme Court.

According to the lawsuit, the cross, in a quiet corner of Pensacola, Florida, caused “spiritual” harm to these three persons and a fourth visitor to Bayview Park because they perceived it as a government endorsement of Christianity in violation of the First Amendment’s Establishment Clause.

Unfortunately, because of the Supreme Court’s ruling in Lemon v. Kurtzman and subsequent cases, both the trial court and the U.S. Court of Appeals for the 11th Circuit were forced to agree. They ordered that the cross had to come down.

The late Supreme Court Justice Antonin Scalia said the Lemon test was “[l]ike some ghoul in a late-night horror movie that repeatedly sits up in its grave and shuffles abroad, after being repeatedly killed and buried.”

And that ghoul sat up again here.

This all seemed to change with the Supreme Court’s decision last year in the case of American Legion v. American Humanist Association, in which the court allowed a more prominent cross-shaped World War I monument to remain on public land in Bladensburg, Maryland.

And in February, after the Supreme Court ordered the 11th Circuit to reconsider its earlier ruling in light of the Maryland case, the appeals court said the Bayview Park cross could remain standing.

#BREAKING: The 11th Circuit just ruled that the #BayviewCross, which has stood in a @CityofPensacola park for almost 80 years, is allowed to STAY! This is a major victory for #ReligiousFreedom and an important new precedent: 1/ https://t.co/LQ2uztspwj pic.twitter.com/zR7bbayL1x

That’s a victory for religious liberty.

Lemon is Dead. Sort Of.

But more importantly, and somewhat ironically, the satanist plaintiff in this lawsuit did something that others have been trying to do for almost 50 years: He killed a ghoul—at least for cases involving religious displays.

Recently appointed 11th Circuit Judge Kevin Newsom made this clear in the Bayview cross case, saying: “For present purposes, … Lemon is dead. Well, sort of. It’s dead, that is, at least with respect to cases involving religious displays and monuments—including crosses.”

The Supreme Court should go further and kill the Lemon test for all Establishment Clause cases.

Despite the good news in this case, Scalia had ended his criticism of the Lemon test with a warning:

Sometimes, we take a middle course, calling its three prongs ‘no more than helpful signposts.’ Such a docile and useful monster is worth keeping around, at least in a somnolent state; one never knows when one might need him.

The Supreme Court doesn’t need him. It should kill, bury, and finally read last rites for the Lemon test in such cases.

Doing so would help bring order to the high court’s decisions by abandoning this malleable standard and allowing the nation’s courts to continue down the proper path of protecting religious liberty.

Zack Smith is a legal fellow in the Meese Center for Legal and Judicial Studies at The Heritage Foundation.