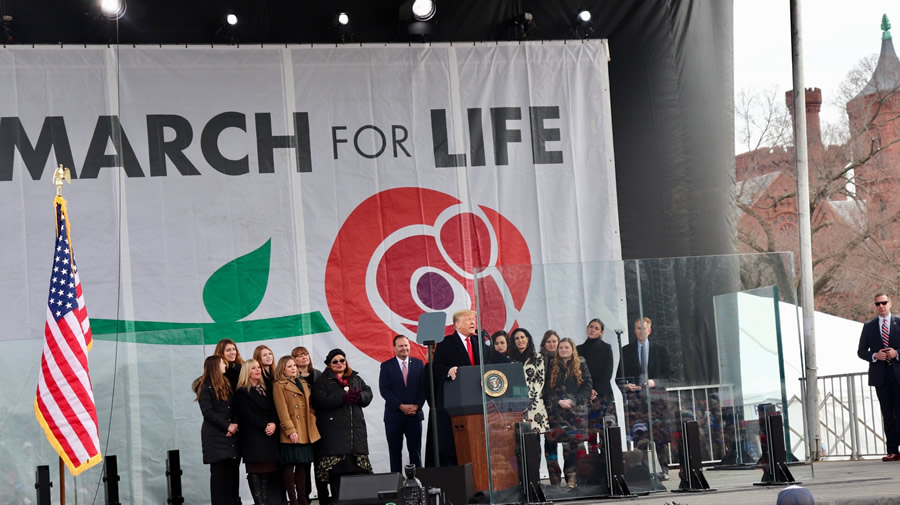 Friday, as a massive crowd jammed the streets of Washington, DC, for the 47th annual March For Life, President Trump became the first sitting President to address the pro-life event live. More than merely showing support, he gave a moving, full-throated defense of the sanctity of life.

I also loved his tribute to the heroic women of the pro-life movement, a long-overdue rebuttal to the often-repeated lie that being pro-life means you are anti-woman.

Here are a few excerpts, and you can watch the full speech at the link above or the player below, which I strongly recommend:

“All of us here today understand an eternal truth: Every child is a precious and sacred gift from God,” Trump said. “When we see the image of a baby in the womb, we glimpse the majesty of God’s creation.”

“Every person is worth protecting and, above all, we know that every human soul is divine and every human life born and unborn is made in the holy image of almighty God.”

“Unborn children have never had a stronger defender in the White House.”

That last comment is hard to dispute. So to avoid even having to try, the “news” channels CNN and MSNBC didn’t cover Trump’s historic speech at all…

…While CBS’s online network CBSN showed what the “BS” in its name stands for by airing instead a softball interview with the CEO of Planned Parenthood.

Meanwhile, the leftist website Mediaite accused Trump of “inflammatory lies and misrepresentations,” like claiming that Virginia Gov. Ralph Northam endorsed killing babies that have already been born. Here’s the video of Northam doing exactly that:

David Daleiden and the Abuse of Pro-Life Journalists

Ironically, while these media outlets were demonstrating how much more important pushing the pro-abortion line is to them than covering actual news, David Daleiden, the man behind the Planned Parenthood expose videos, was speaking about how overzealous pro-abortion politicians are abusing the legal system and violating the civil rights of journalists.

They are persecuting him for doing what every other undercover reporter does, and these media outlets apparently have no problem with that.

Worth noting: Daleiden said that once his case is appealed out of the biased leftist California courts and the judge’s ban on letting the public see the undercover videos is lifted, they have almost 200 more hours of unreleased footage. He said, “It is some of the most damning and incriminating stuff that has ever been recorded. We intend to release it in the near future, as soon as we can. The public has to know what Planned Parenthood and their business partners have been doing to children in the womb and have been doing to infants for decades at this point.”

I have some predictions: Deleiden will eventually be exonerated and that footage released. I also predict that CNN, MSNBC, CBS, et al, will put on blinders and refuse to let their viewers see it.