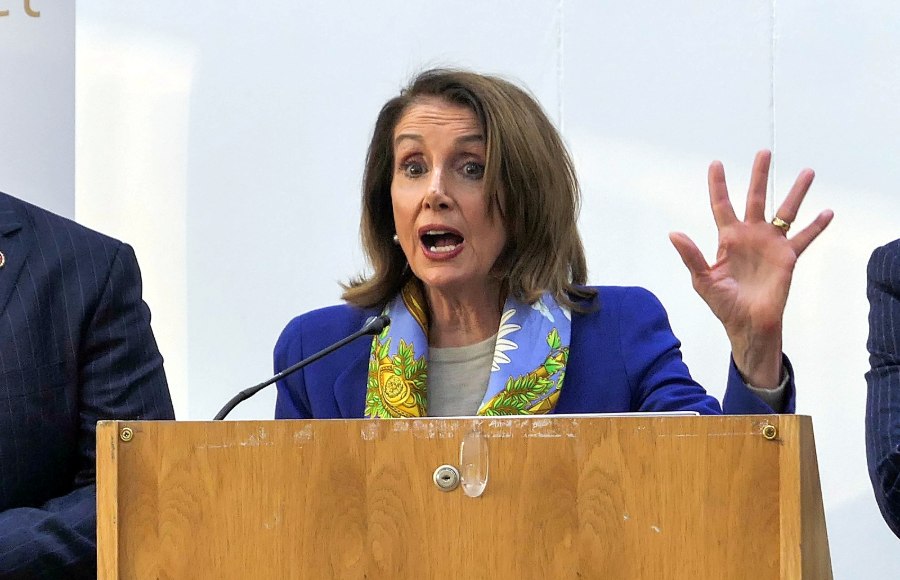 Congressional Democrats this week finally unveiled the legislative text of the largest tax increase in more than 50 years.

It weighs in at more than 880 pages, so it’s no wonder they have attempted to keep the details of the so-called “Build Back Better Act” under wraps.

Whenever the government spends money, it spends somebody else’s money — that is to say, a lot of your hard-earned money.

Those tax increases are meant to fund a costly and controversial spending agenda meant to reshape the American economy and permanently expand government control over many aspects of people’s lives.

The goal of the liberal proposal is to put more of the economy’s resources under the control of politicians and bureaucrats, rather than the private sector.

The following are eight things you need to know about President Joe Biden’s and congressional Democrats’ tax increases:

Biden has repeatedly stated that his tax package would not increase taxes on people earning less than $400,000 per year.

The official scorekeepers at the Joint Committee on Taxation show that the Build Back Better Act would in fact raise taxes on middle-income Americans.

Under the proposal, taxes would go up for families bringing home $50,000 or more per year, far below what Biden promised.

That should come as no surprise. It’s simply impossible to fund the size of government that liberals plan without major tax hikes on the middle class. Even confiscating all of the income of all businesses and high-income taxpayers would not pay for their promises.

And that result comes even as the methodology used by the Joint Committee on Taxation for its analysis tips the scale in a way that misleadingly shows a lower tax burden by counting hundreds of billions in government spending on welfare benefits as counting against people’s taxes.

While scorekeepers should be clear about the effects of transfer payments, misleadingly classifying checks from the government as a tax cut results in an analysis showing some people paying a negative average tax rate, which is illogical.

Make no mistake, this gimmick obscures the full tax burden of this bill.

The Build Back Better Act would increase the top marginal tax rate for individuals to 46.4%.

The bill would add a new 3% surtax for all taxpayers earning more than $5 million. That comes on top of the 3.8% surtax on high earners put in place by Obamacare.

These proposals are premised on the false notion that high earners do not “pay their fair share” of taxes. 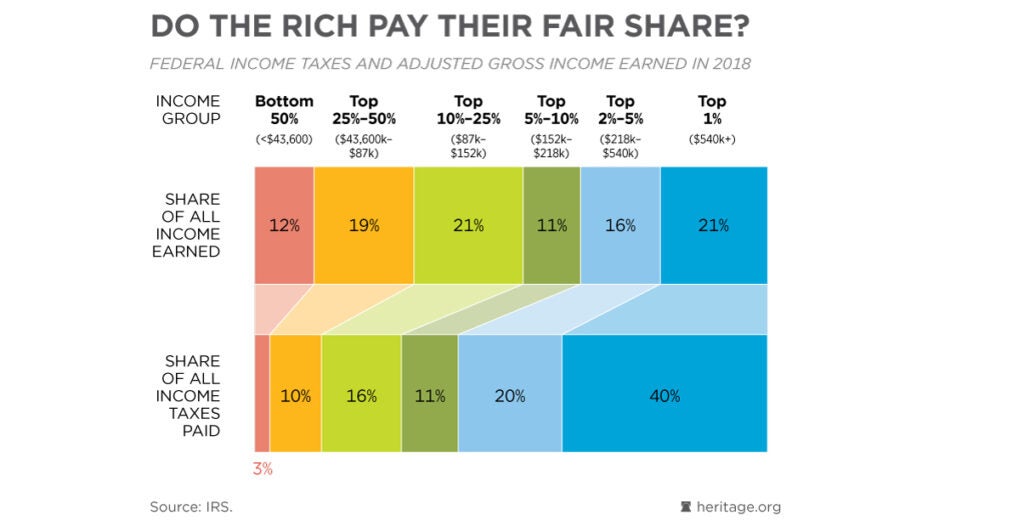 These tax increases will only take more money out of the private sector and harm the economic recovery.

3. It Raises Taxes on Pass-Through Businesses

By increasing the top marginal income-tax rate, the bill would also dramatically increase taxes on American small businesses, which typically file as pass-throughs and pay taxes through the individual income-tax system.

Additionally, this plan would limit the Section 199A deduction for certain pass-through businesses and would impose the Obamacare Net Investment Income Tax on many pass-throughs as well.

Both of these would work with the other tax increases in this bill to dangerously expand the tax code’s double taxation of investment and savings.

These proposals would work to double-tax the portion of a business’s spending that is on inputs to production.

4. It Increases Taxes on Capital Gains

The bill would increase the top capital gains tax rate from 20% to 25%. These are not actually taxes on wealthy Americans. Instead, they are a duplicative layer of taxation on the added value of business activity.

That would stunt the ability of our economy to invest in expanding business operations and job opportunities. That barrier to investment and growth would also make it dramatically harder to start new businesses.

This tax hike would arbitrarily secure the position of monopolies and apply destructive pressure to small businesses. Additionally, these taxes directly harm the efforts of Americans to save for their retirement.

Additional provisions in this bill that limit the ability to save in IRAs will have similar effects, stifling retirement savings and decreasing the economy-wide investment in future productivity.

5. Its Corporate Tax Rate Is Higher Than Communist China’s

The bill would increase the federal corporate tax rate to 26.5%, more than the European average of 19.99% and more than even the 25% rate of communist China.

What’s more, these taxes are felt directly by all Americans. Business taxes necessarily show up through reduced wages, increased prices to consumers, and through diminished investment in expanding operations and employment.

Additionally, these taxes aren’t, as the left claims, just on corporate income. The tax code treats many legitimate costs of doing and expanding business as though they were profits and taxes them.

That would be akin to taxing a farmer on his purchase of seeds or an artist on her purchase of paint. These taxes are felt twice — once by diminishing the number of seeds planted or paint purchased, and secondly through smaller harvests and fewer paintings created.

This isn’t just a careless byproduct of liberal policies; it’s their goal. Double taxing the cost of doing and expanding business subtly interferes with private sector development, paving the way for central planners to decide how our economy is organized and develops.

Any tax system that directly taxes both the inputs to production and the results of those inputs unduly penalizes investment in the future. These proposed tax policies do nothing to make people pay their “fair share.” They simply stifle the private sector and, as Winston Churchill put it best, ensure the “equal sharing of miseries.”

The bill would heavily penalize international trade, including the imports of vital raw materials to U.S. industries and exports of American products around the globe.

For example, the legislation would dramatically reduce the Global Intangible Low-Taxed Income and Foreign-Derived Intangible Income tax deductions. This pair of tax deductions offset the burdensome U.S. tax system so that firms are less incentivized to park assets and do business outside of the U.S.

Additionally, the Global Intangible Low-Taxed Income deduction works with many other business deductions that the bill would repeal or limit to offset taxes paid overseas and to allow evenhanded tax treatment to international trade.

These massive tax hikes would exacerbate the double taxation of costs of doing and expanding business and serve as a barrier to international trade and a disincentive for firms to invest in America.

That would effectively be a slush fund six times the IRS’ entire annual budget. The IRS had a $13 billion budget in 2021, including $5 billion for nearly 35,000 enforcement agents.

There simply is no plausible way for the scandal–ridden and union-dominated agency to absorb so much extra funding and power while avoiding waste, fraud, and abuse.

This slush fund raises the risk of returning to a politicized IRS. The IRS has a decades-long history of overreach and abuse, from the collecting of a list of enemies of the Nixon administration to attempting to fire a whistleblower who participated in a series of hearings on IRS abuse in the Clinton administration to the infamous targeting scandal under the Obama administration to the leak of confidential taxpayer records and associating the teachings of the Bible with a political party this year.

Biden has even proposed requiring financial institutions to report to the IRS on the activities of every financial account with $600 or more, a major invasion of privacy. It would impose billions of dollars in costs that will have a disproportionately adverse impact on small financial institutions, much of which will be borne by consumers.

While it isn’t a part of the Ways and Means bill yet, some senators have discussed including it.

To be clear, everyone should pay the taxes that he or she legally owes, but the best way to encourage compliance is to simplify the tax code and reduce the burden of taxes.

Even though the 2017 Tax Cuts and Jobs Act helped simplify the tax code and ease the compliance burden, it still took taxpayers more than 6 billion hours and an economic cost of more than $304 billion to obey the tax laws.

However, this legislation would go in the exact wrong direction, making the tax code more expensive, adding dozens of new provisions, picking winners and losers, increasing incentives to game the system, and making the code harder to comply with.

While the Build Back Better Act massively increases taxes to fund more government spending that House Speaker Nancy Pelosi, D-Calif., says will “transform our economy,” the bill also doubles down on political central planning through the tax code.

Favored liberal groups and corporations that hew to the left-wing agenda stand to gain, thanks to dozens of new, generous tax credits.

Implementing provisions of the Green New Deal is a significant focus of the Build Back Better Act, with $235 billion in tax incentives for green energy. There is even a $1,500 refundable tax credit for electric bicycles, which are undoubtedly less green than regular human-powered bicycles.

Our tax system should be simple, transparent, and fair, not pick winners and losers based on politically motivated agendas.

The bill is a return to the tried-and-true tactics of the left; namely, to use the tax code to obscure payments to favored interests and to claim they can fund it all on the backs of businesses and the wealthy.

They want you to believe that these taxes are far enough away from you that you’ll never see them. In reality, these tax burdens will fall on every American family and business. They will burden our nation today and mortgage our nation’s future.

The unavoidable truth is that all these taxes will be felt through diminished purchasing power and through slower economic, job and wage growth.

The left need not implement central planning through overt regulation alone. The bill’s doubling down on multiple layers of taxation on private investment will heavily penalize the work of Americans to build the future.

That would leave the government as the de facto decider of how our economy is organized and at whose expense.

These taxes can only result in larger direct taxation of Americans, a reduction of wages, increasing prices while fewer products are offered, and diminished investment in future job opportunities.

Finally, these taxes will strike at the heart of your ability to live in a free and prosperous society. Make no mistake, the blank check proponents want will have your signature at the bottom.

Matthew Dickerson is the director of the Grover M. Hermann Center for the Federal Budget at The Heritage Foundation.