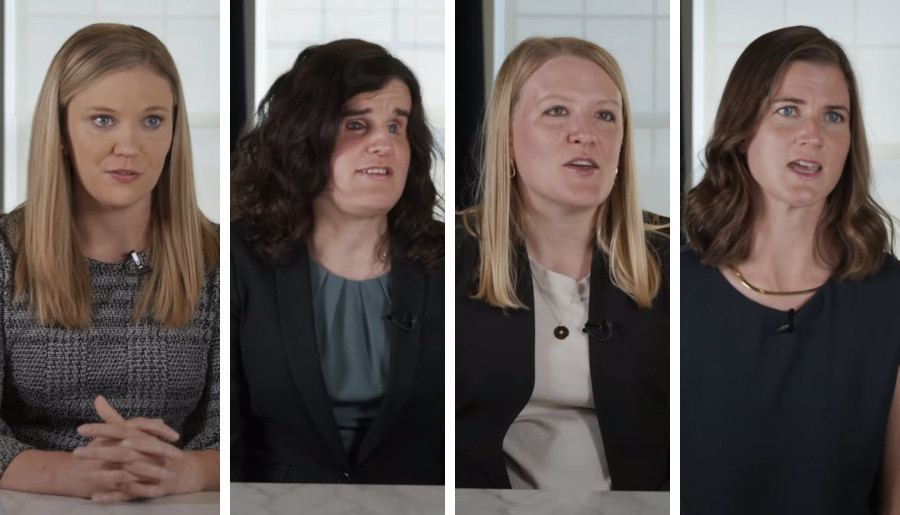 Amanda Rauh-Bieri, just out of law school, knew exactly who she wanted to clerk for.

It wasn’t a lawyer or judge she had been following for years, or even months.

Instead, it was Amy Coney Barrett, who was about to be seated as a new judge on the Chicago-based U.S. Court of Appeals for the 7th Circuit.

“The first time I heard of Judge Barrett was after her [Senate] confirmation hearing, when the video of some of her exchanges with the senators went viral,” said Rauh-Bieri, who clerked for Barrett on the U.S. Court of Appeals for the 7th Circuit from 2017-2018.

“I remember seeing that exchange and just being incredibly blown away,” Rauh-Bieri said of Barrett’s September 2017 confirmation hearings.

One such moment was when Sen. Dianne Feinstein, D-Calif., questioned the mother of seven about the influence of her Catholic faith.

“The dogma lives loudly within you, and that’s of concern,” Feinstein said to Barrett.

Barrett responded: “It’s never appropriate for a judge to impose that judge’s personal convictions, whether they arise from faith or anywhere else, on the law.”

Rauh-Bieri, 31, currently an associate at the law firm of Miller, Canfield, Paddock and Stone PLC in Grand Rapids, Michigan, said she was drawn to Barrett and knew she wanted to be one of the new judge’s law clerks.

“[I was] so impressed by the way that she handled that tough interaction,” Rauh-Bieri said.

“She demonstrated this incredible grace and poise in the face of some pretty intense questioning. And I remember thinking at that moment that she was exactly the kind of judge that I wanted to clerk for. And I was very fortunate that the opportunity came about.” 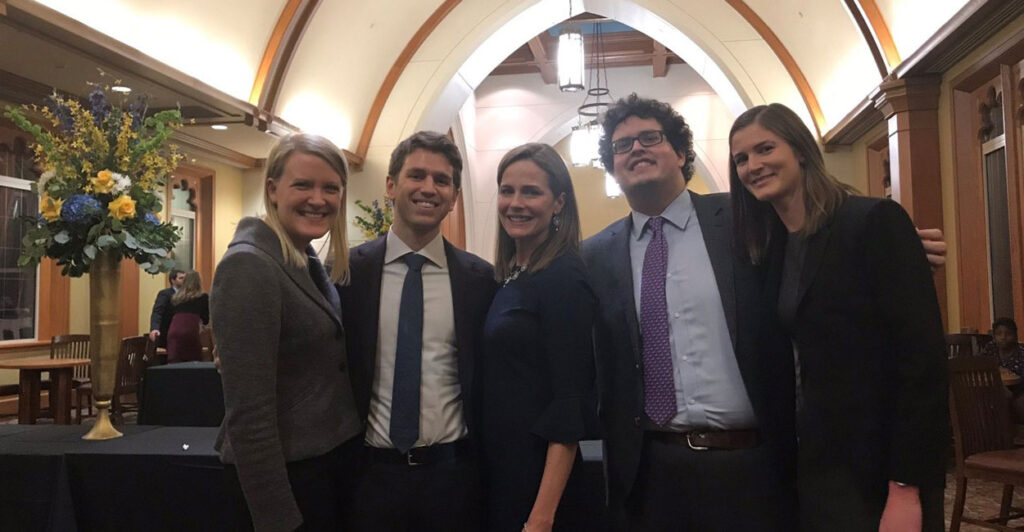 President Donald Trump announced Sept. 26 that he would nominate Barrett to fill the Supreme Court seat vacated by the Sept. 18 death of Justice Ruth Bader Ginsburg.

Laura Wolk, 33, a former Notre Dame student of Barrett’s, told The Daily Signal that Barrett was, in some ways, a lifesaver for her. Wolk is blind.

“When I went to Notre Dame, I had asked the school to provide me with the same exact assistive technology that I had purchased for myself, just in case … something were to go wrong,” Wolk told The Daily Signal in an interview.

“Unfortunately, though they had worked on that process, the technology from the school was not there. And so I came to Notre Dame, the technology was not purchased, and almost immediately my own personal computer started to fail. So it was … the exact emergency scenario that I had planned for.”

Accommodations for blind students across the nation are better now then they were in 2013, Wolk said.

Unlike classmates who could see, Wolk said, she couldn’t just borrow a computer or go to a library.

Even if she could, the computer wouldn’t have the right software on it for a visually-impaired person.

“And so I was immediately put into a position where I couldn’t read my textbooks,” Wolk said. “I couldn’t take notes. I was really struggling to keep up in class, and as a first-semester student who is also trying to learn how to do law school, it was a really terrifying experience.”

She said that Barrett went to bat for her in ways she had never experienced before:

What I was expecting from her was just practical advice: ‘This is the person you need to email. This is what you should say.’ But when I went to go talk to her, I instantly … I found myself just talking with her not only about my technology problems, but also about all of the other struggles that I was having as a blind person at Notre Dame.

Barrett’s husband, Jesse Barrett, a former assistant U.S. attorney, also graduated from Notre Dame. He was editor in chief of the Notre Dame Law Review, she was executive editor.

“She just allowed me to talk and to say my piece and to get out all of my emotions. And at the end of it, as I wrote in my piece describing this interaction, she just very quietly, but completely matter of fact, told me, ‘This is not your problem anymore. It’s my problem.’” 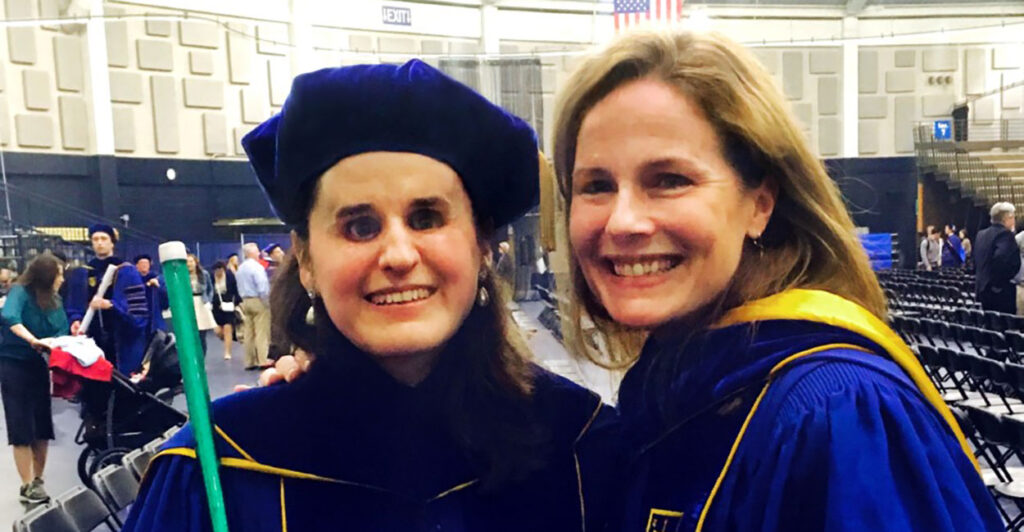 Laura Wolk, left, a former Notre Dame student of Amy Coney Barrett’s, says the judge in some ways was a lifesaver. (Photo courtesy of Laura Wolk)

Wolk said that Barrett “made it clear to me that … there are times in life when the best gift that you can give to someone is to completely take something on and take it onto yourself and take it off of their plate.”

Wolk said Barrett exhibited the same care and concern during her last semester of law school, when she had a small health scare related to her blindness resulting from treatment she underwent as a child:

And again, just like my first semester, Professor Barrett was — she just proved to be this presence where she would occasionally check in on me as things were proceeding, asking me how I was doing and expressed that she was there for me for the long haul and she was willing to be there as a support, even when it had absolutely nothing to do with her role as being a professor for me.

Wolk, who lives in Washington, D.C., will return to private practice in that area after recently wrapping up a clerkship with Supreme Court Justice Clarence Thomas.

Lexi Baltes, 28, clerked for Barrett in 2018-2019. Baltes, also a first-year student in Barrett’s class on constitutional law at Notre Dame, said she wouldn’t describe her former professor as easy.

“She was a tough professor,” Baltes said. “Beloved, but tough. And also revered, universally respected, and admired by Notre Dame law students.”

Baltes, an associate at the law firm of Consovoy McCarthy PLLC in Arlington, Virginia, said Barrett welcomed every perspective in her classroom.

“She always encouraged open dialogue in class, encouraged diverse viewpoints, and would push back on those viewpoints no matter what they were, to help us as students try to reach the most refined and principled answer, whatever that might be,” Baltes said.

Barrett has the same approach in the courtroom, Baltes said:

She does the same thing in chambers. She tries to use her clerks, use the arguments by the parties, use whatever’s available, to make sure that she is reaching the most principled answer, separate from any personal preference or public pressure, to get the right result under the law.

“I think we know a lot of the hot topic cases. One in particular … it was hard to kind of figure out what the right side was. And it wasn’t one that seemed obvious to us,” Brookins, who lives in Arlington with her husband, recalled in an interview with The Daily Signal, adding:

The next day she knocked on my door, stopped by my office again, and she said, ‘I think I’m kind of coming around to your side.’ And I said, ‘I think I’m coming around to your side.’ And I think that what that really shows is that she values the opinion of those around her. And she’s not coming to the table with these preconceived notions of how cases should come out.

Aside from the practical legal experience they received under Barrett, these admirers also came away with moments that they say illustrate Barrett’s character.

“One really fond memory of mine: The very first day that I went into chambers, I walked in the door and she was standing there holding a roll of paper towels and some Windex and just wiping down all of the wood from space that had been vacant for 20 years,” Brookins said.

“And my first impression of her was somebody who would just get into the work that needed to be done, regardless of what the work was.”

Baltes and her fellow law clerks had court in Chicago; Barrett had gone up earlier, but didn’t have a ride back.

“It was my co-clerk’s car, and happened to be an old minivan,” Baltes said. “And Judge needed a ride back, and she insisted on riding in the back seat, which I felt very uncomfortable about. But she’s just so humble, she has such a gracious attitude in every aspect of her life, whether it’s riding in a car with her clerks or sitting on the bench listening to a case.” 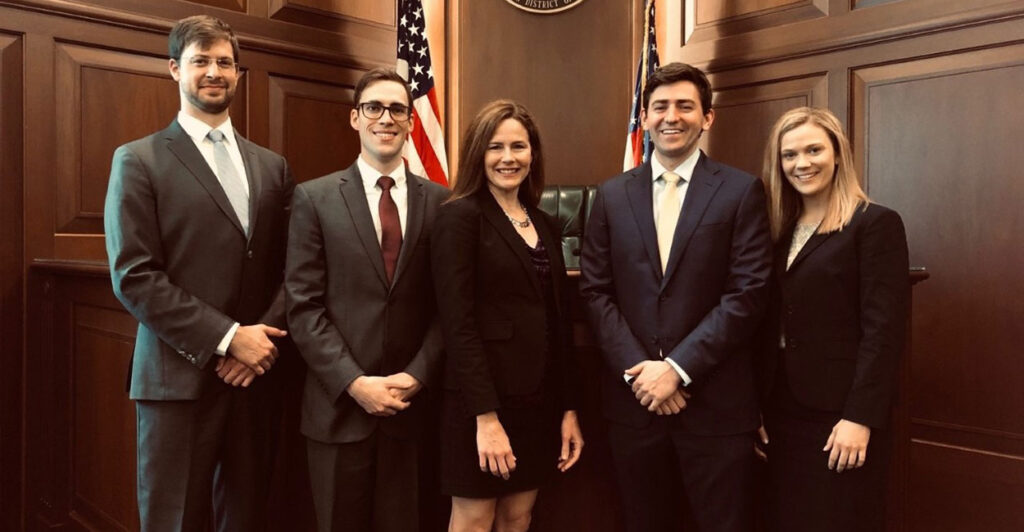 Rauh-Bieri said she recalls one time when Barrett had to bring her youngest children into work, and how it illustrated the judge’s dedication and ability to keep her commitments:

I can remember coming into chambers once, and two of her youngest kids were in our courtroom, playing judge. So they were down the hall doing that, while she was in her office working on an opinion.

And that’s such a unique view. And as clerks, we were fortunate enough to see her approach, being a judge and being a mother at the same time. And I think that’s going to be a really incredible thing to see in a Supreme Court justice. We’ve never had that before.

When 100 Percent of the Democrats Vote Against Amy Coney Barrett

Ginsburg Leaves Liberal Legacy After Decades on the Court