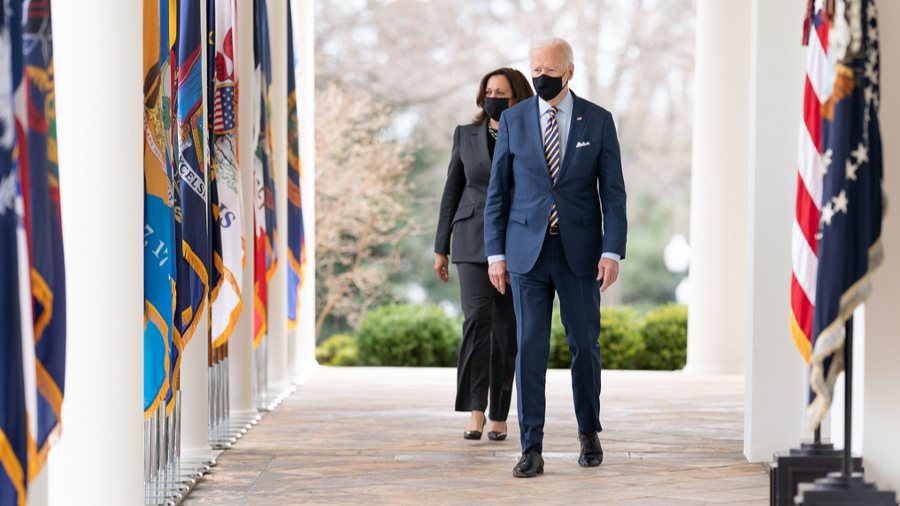 In remarks at the White House, Biden said Thursday evening that he had directed the Labor Department to develop an emergency regulation giving the Occupational Safety and Health Administration the authority to enforce a national vaccine mandate for larger employers.

While some hailed Biden for taking strong action beyond the federal workforce, others expressed disbelief at what they consider authoritarian measures.

Here are four things to know as the government’s vaccine requirements likely play out in court.

1. What States Are Saying

On Friday, Texas Attorney General Ken Paxton outright announced a lawsuit on Twitter, calling the mandate on employers of 100 or more workers “the most unconstitutional, illegal thing I’ve ever seen out of any Admin in modern American history.”

Biden’s new nat’l vaxx mandate on private biz may be the most unconstitutional, illegal thing I’ve ever seen out of any Admin in modern American history.

This is an egregious, tyrannical power grab that stands no chance in court.

Biden was asked about potential state challenges to his vaccine mandate while speaking Friday at a school in the District of Columbia.

“Have at it,” the president said, adding:

One Republican governor, Phil Scott of Vermont, came out in support of Biden’s actions Thursday evening.

I appreciate the President’s continued prioritization of vaccination and the country’s recovery as we move forward. As Vermont’s experience shows, vaccines work and save lives. They are the best and fastest way to move past this pandemic. https://t.co/xqNC0GXELq

Also Thursday evening, Indiana Attorney General Todd Rokita tweeted: “Biden’s decision to demand American workers get vaccinated or risk losing their jobs is what one would expect of dictators in a banana republic.”

Biden's decision to demand American workers get vaccinated or risk losing their jobs is what one would expect of dictators in a banana republic. In IN we do not rule by fiat, and I will not allow the president to destroy our guaranteed freedoms and our economy at the same time.

About an hour later, Arizona Attorney General Mark Brnovich called Biden’s move a “devastating step toward nationalizing health care systems” and said he would act to “defend” the “state’s sovereignty.”

I am reviewing his outrageous actions and will take all legal recourse to defend our state’s sovereignty and the rights of Arizonans to make the best healthcare decisions for themselves. (3/3)

Missouri Attorney General Eric Schmitt, in a tweet Thursday evening, wrote: “Biden’s historic overreach on vaccine mandates will not stand in Missouri. We’re at a crossroads in America — who we are and what we’re going to be. We must fight back.”

We’re at a crossroads in America — who we are and what we’re going to be. We must fight back

Following today's announcement by the Biden Administration, my staff has begun to review the law and its legal standing.  We will vigorously defend the rule of law and fight any overreach that may limit individuals personal freedoms.

In this particular case, “individual personal freedoms” are not likely the question as the president tells private companies what to do and puts jobs on the line, said Ilya Shapiro, vice president and director of constitutional studies at the libertarian Cato Institute.

“The legal analysis here is not focused on individual rights, but … federal powers,” Shapiro told The Daily Signal in a phone interview.

He referred to the mandate as a “constitutional triple threat.”

First, he said, is the constitutional issue of separation of powers.

As controversial as it was, Congress passed the Affordable Care Act’s mandate that Americans purchase health insurance; it wasn’t imposed by President Barack Obama.

“It is not in the executive branch enumerated powers,” said Shapiro, who noted that he is pro-vaccine but anti-mandate.

Some legal experts contend that Biden has the power to impose OSHA mandates on companies through the Constitution’s commerce clause. That provision allows Congress to regulate commerce among states and between foreign nations.

In 1970, Congress passed the Occupational Safety and Health Act, which established the agency and included emergency temporary provisions.

Yup. Biden's COVID vaccine mandate easily falls within the commerce clause because it applies to employers with 100 or more employees, and the OSH Act specifically provides for Emergency Temporary Standards for employee safety, without regard to the Administrative Procedures Act. https://t.co/HX4C1ALSUU

Governor Kemp needs to learn a thing or two about the Commerce Clause and employment relationships. Nothing overreaching about it—and not a thing Georgia can do to thwart it unless the state wants to return to pre-Darby Lumber days and undo every basic workplace right. #gapol https://t.co/sq5UobOrVg

Requiring many companies to make vaccines a condition of employment is further removed from the commerce clause than the Obamacare mandates for individuals to buy — and companies to supply — health insurance.

Moreover, the U.S. Supreme Court in 2012 upheld Obamacare’s so-called individual mandate, but rejected the commerce clause argument and instead called the mandate a tax.

“I don’t know of any federal vaccine mandates,” Shapiro said. “The level of government is important. Vaccine requirements before going to school are at the state, municipal, or local level.”

Third, forcing businesses to require their employees to be vaccinated is not a “proper” use of federal power, Shapiro said.

OSHA doing this vaxx mandate as an emergency workplace safety rule is the ultimate work-around for the Federal govt to require vaccinations.

Biden may have made a poor move legally and politically, Jonathan Turley, a law professor at George Washington University, wrote on his website.

“The problem is that the thing being ‘worked around’ is the Constitution,” Turley wrote. “Courts will now be asked to ignore the admission and uphold a self-admitted evasion of constitutional protections.”

The ‘work around’ was needed because, as some of us have previously [said] during both the Trump and Biden administration[s], the federal government does not have clear authority to impose public health mandates. Authority for such mandates has traditionally been recognized within state authority.

In 1905, the Supreme Court ruled 7-2 in the case of Jacobson v. Massachusetts that the city of Cambridge, Massachusetts — and thus other local governments — could levy fines against individuals who refused to take the smallpox vaccine.

In 1922, the high court ruled unanimously in the case of Zucht v. King to uphold the power of states to require vaccinations before children attend public school.

But a recent ruling could bear on Biden’s actions.

The Supreme Court last month determined that the Centers for Disease Control and Prevention lacked the authority to impose a national moratorium on evictions during the pandemic.

The high court ruled in the case of Alabama Association of Realtors v. Department of Health and Human Services.

“The Supreme Court slapped down the CDC’s imposition of a nationwide eviction moratorium,” John Malcolm, director of the Meese Center for Legal and Judicial Studies at The Heritage Foundation, told The Daily Signal.

The only historical precedents for such executive actions may be mandates imposed during World War II by President Franklin Roosevelt, presidential historian and author Craig Shirley said.

But, Shirley noted, Roosevelt acted during wartime. Still, he predicted that Biden’s mandate that private businesses make sure employees are vaccinated will survive a court challenge.

“You will see a lot of civil disobedience across the country,” Shirley told The Daily Signal. “This is not what people expected when they voted for Joe Biden. They thought they were voting for a moderate, but have gotten an ultra-leftist that wants to use the government to push private citizens around.”

In a case in 1983, OSHA issued an emergency regulation to limit worker exposure to asbestos, but it was struck down by the U.S. Court of Appeals for the 5th Circuit.

The appeals court ruled that asbestos may present a danger, but that OSHA failed to show the regulation was needed to alleviate the risk.

A poll from the Job Creators Network, an advocacy group for small business, found that a plurality of 42% of those surveyed agreed that mandatory vaccinations would hurt small businesses, while only 33% thought the mandates would help.

Other polls, though, have shown support for mandating vaccinations against COVID-19.

However, one leading liberal think tank waited until after Biden announced the government mandates on private employers.

Patrick Gaspard, president and CEO of the Center for American Progress, sent an email Friday to staff announcing the think tank’s new policy.

“CAP must do its part to advance this program at a moment when both private and public concerns must be aligned,” Gaspard wrote. “In light of this, CAP will be requiring full vaccination against COVID-19 for every member of this staff as we return to in-place work.”