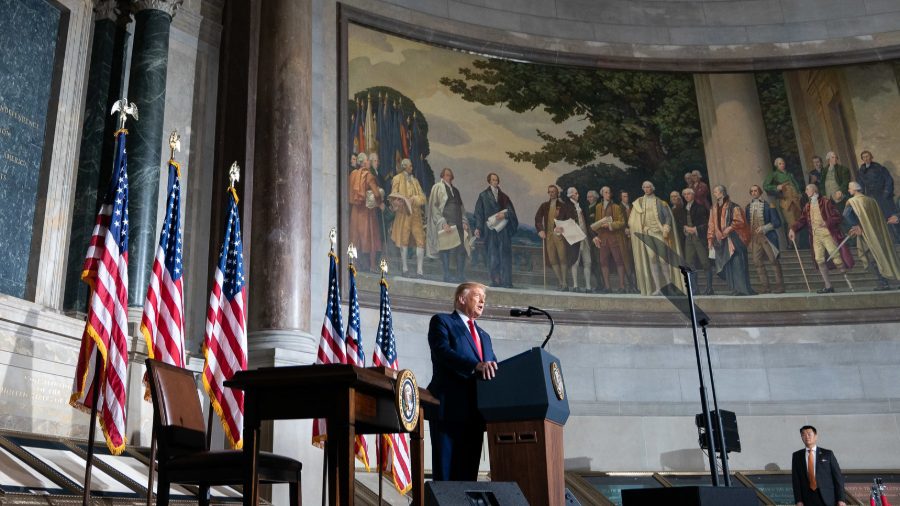 President Donald Trump speaks Thursday during the White House Conference on American History at the National Archives in Washington.

President Donald Trump, in Constitution Day remarks, drew a direct connection between the riots and mayhem in the streets to what schools are teaching about America.

“Our mission is to defend the legacy of America’s founding, the virtue of America’s heroes, and the nobility of the American character,” the president said at the National Archives Museum Thursday for the White House Conference on American History. “We must clear away the twisted web of lies in our schools and classrooms, and teach our children the magnificent truth about our country.”

In his remarks, Trump announced actions to promote “patriotic education,” and unleashed an attack on several sacred cows of the left such as cancel culture, critical race theory, The New York Times’ 1619 Project, and the looting and arson occurring across the country.

Delivering the speech on the 233rd anniversary of the Constitution, Trump praised the historical document as being “the product of centuries of tradition, wisdom, and experience.”

“No political document has done more to advance the human condition or propel the engine of progress,” Trump said. “Yet, as we gather this afternoon, a radical movement is attempting to demolish this treasured and precious inheritance. We can’t let that happen.”

“Our youth will be taught to love America with all of their heart and soul,” Trump said. “We will save this cherished inheritance for our children, for their children and for every generation to come.”

Trump announced the National Endowment for the Humanities is awarding a grant to support a pro-American curriculum in schools. He also announced that he will be signing an executive order establishing the 1776 Commission to promote patriotic education.

“A radical movement is attempting to demolish this treasured and precious inheritance. We can’t let that happen.” — President Donald Trump

“It will encourage our educators to teach our children about the miracle of American history and make plans to honor the 250th anniversary of our founding,” the president said of the 1776 Commission.

This is an important point to draw attention to, said Lindsey Burke, director of the Center for Education Policy at The Heritage Foundation.

“The president is right to shine a spotlight on the negative effects of critical theory, taught throughout colleges, particularly colleges of education, and which makes its way down through K-12 schools,” Burke told The Daily Signal. “And the administration is right to point to the inaccuracies of the 1619 Project, which should continue to be noted. More parents will now be aware of this content — which paints a negative picture of America — making its way into their children’s schools. America is a truly exceptional nation, and that’s a message that children should hear.”

2. Cancel Culture and the ‘Left-Wing Mobs’

The president added that a “radical movement” is attempting to demolish this treasured American history.

“The left-wing mobs have torn down statues of our Founders, desecrated our memorials, and carried out a campaign of violence and anarchy,” Trump said. “Far-left demonstrators have chanted the words, ‘America was never great.’ The left has launched a vicious and violent assault on law enforcement — the universal symbol of the rule of law in America.”

Trump added that politicians, establishment media, and even large corporations have sided with those causing the mayhem.

“Whether it is the mob on the street or the cancel culture in the boardroom, the goal is the same: To silence dissent, to scare you out of speaking the truth and to bully Americans into abandoning their values, their heritage and their very way of life,” Trump said.

“We are here today to declare that we will never submit to tyranny,” the president added. “We will reclaim our history, and our country, for citizens of every race, color, religion, and creed.”

During his speech, Trump drew a correlation between the riots and education.

“The left-wing rioting and mayhem are the direct result of decades of left-wing indoctrination in our schools,” Trump said. “It has gone on far too long. Our children are instructed from propaganda tracts, like those of Howard Zinn, that try to make students ashamed of their own history.”

Howard Zinn is a liberal historian whose work has focused almost entirely on the negative aspects of American history.

The left has warped, distorted the American story with deception, falsehoods, and lies. There is no better example than The New York Times’ totally discredited 1619 Project. …

America’s founding set in motion the unstoppable chain of events that abolished slavery, secured civil rights, defeated communism and fascism, and built the most fair, equal, and prosperous nation in human history.

The Times’ 1619 Project contends the United States was founded on principle of advancing slavery. The claims of the project have been challenged by historians on the right and left.

Trump talked about critical race theory as an example, which he called a Marxist doctrine that says even children are complicit in racism and society must be radically transformed.

Critical race theory is a theoretical framework that contends individuals are either oppressed or are oppressors based on their skin color.

“Teaching this horrible doctrine to our children is a form of child abuse in the truest sense of those words,” Trump said. “For many years now, the radicals have mistaken Americans’ silence for weakness. They are wrong.”

“There is no more powerful force than a parent’s love for their children — and patriotic moms and dads are going to demand that their children are no longer fed hateful lies about this country,” Trump added. “American parents are not going to accept indoctrination in our schools, cancel culture at work, or the repression of traditional faith, culture and values in the public square.”

Trump noted that he banned the promotion of critical race theory in the federal government through employee training programs that focus on “white privilege” or that the United States is an inherently racist country.

“Critical race theory, the 1619 Project, and the crusade against American history is toxic propaganda — an ideological poison that, if not removed, will dissolve the civic bonds that tie us together,” Trump said. “That is why I recently banned training in this prejudiced ideology from the federal government and banned it in the strongest matter possible.”

The president said such propaganda is a departure from the civil rights movement.

We embrace the vision of Martin Luther King, where children are not judged by the color of their skin, but by the content of their character. The left is attempting to destroy that beautiful vision and divide Americans by race in the service of political power.

By viewing every issue through the lens of race, they want to impose a new segregation, and we must not allow that to happen.