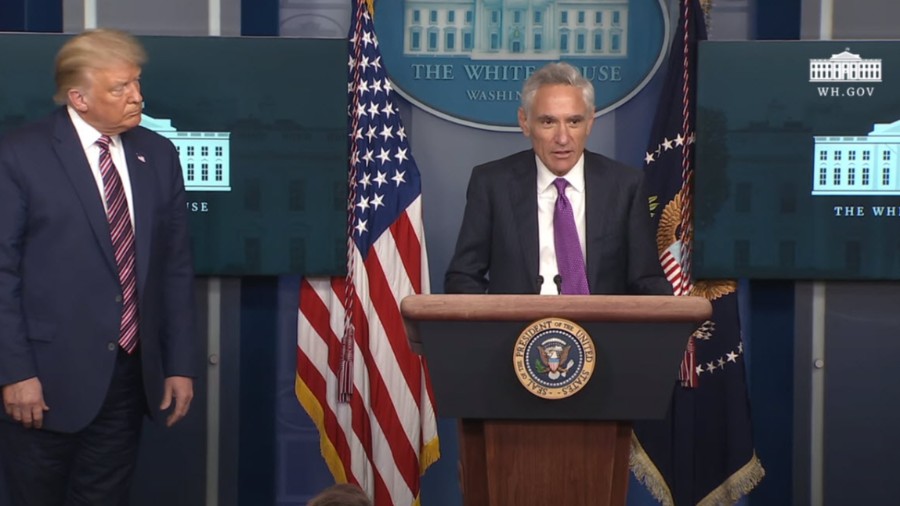 Despite an accomplished career at the Stanford University Medical Center, including writing a leading textbook in his field, Dr. Scott Atlas, the president’s new appointee to the White House coronavirus task force, is being dismissed by some liberal commentators as just a political hack.

CNN in several segments labeled Atlas as a “Fox News guest,” claiming President Donald Trump’s new adviser is “unscientific” and part of an “echo chamber,” according to tracking by the Media Research Center, a conservative media-watchdog group.

He also has opposed government mandates to wear masks.

We are all in this fight together, and only the media has distorted and diminished Dr. Atlas’ highly acclaimed career, simply because he has come to serve the president. Dr. Atlas, like all of the medical experts in the administration, is working to carry out the president’s number one priority: protecting the health and safety of the American people.

Although an adviser to two establishment Republican presidential candidates in the past, Atlas has had a largely mainstream role in the medical world.

Here are three things to know about the new doctor on the White House coronavirus task force.

Atlas is a radiologist affiliated with multiple hospitals in the Stanford, California, area, according to U.S. News & World Report. They include Stanford Health Care-Stanford Hospital and Lucile Packard Children’s Hospital Stanford.

The specialty involves reading X-rays, CT scans, and MRIs. Atlas was a professor and chief of neuroradiology at Stanford University Medical Center from 1998 to 2012.

In that and previous academic positions, Atlas trained more than 100 neurologists, according to the university, which said many of those he trained are now leaders in their field.

Atlas has lectured throughout the world on MRI advances and spoken about economic issues related to technological innovation.

In the private sector, Atlas has advised startup entrepreneurs and companies in life sciences and medical technology, according to Stanford.

In 2007 and early 2008, Atlas was a health care policy adviser to the Republican presidential campaign of former New York Mayor Rudy Giuliani.

Four years later, Atlas was a health care policy adviser to the presidential campaign of Republican nominee Mitt Romney, the former Massachusetts governor who is now the junior senator from Utah.

According to the Hoover and Stanford websites, Atlas “investigates the impact of government and the private sector on access, quality, and pricing in health care, global trends in health care innovation, and key economic issues related to the future of technology-based medical advances.”

Atlas has testified before the House Energy and Commerce health subcommittee as well as Congress’ Joint Economic Committee. He has briefed directors of federal agencies and members of the House GOP Doctors’ Caucus, Stanford University says.

Atlas’ books include Restoring Quality Health Care: A Six-Point Plan for Comprehensive Reform at Lower Cost, published this year. Another book, In Excellent Health: Setting the Record Straight on America’s Health Care System, was published in 2012.

Atlas also wrote the leading textbook in his field, Magnetic Resonance Imaging of the Brain and Spine. The fifth edition was released in 2016; the book has been translated from English into Mandarin, Spanish and Portuguese, according to Stanford.

Atlas has written for more than 120 scientific publications and leading medical journals, according to Stanford. He has been an editor, an associate editor, and a member of the editorial and scientific boards of several other journals, as well as a member of national and international scientific societies during the past three decades.

He served on the nominating committee for the Nobel Prize in Physiology or Medicine for several years.

While commentators on CNN have criticized Atlas for being an analyst on Fox News Channel, he has been interviewed and provided analysis to numerous left-leaning and mainstream media outlets as well, according to Stanford.