Climate change is real, but it’s not the end of the world. 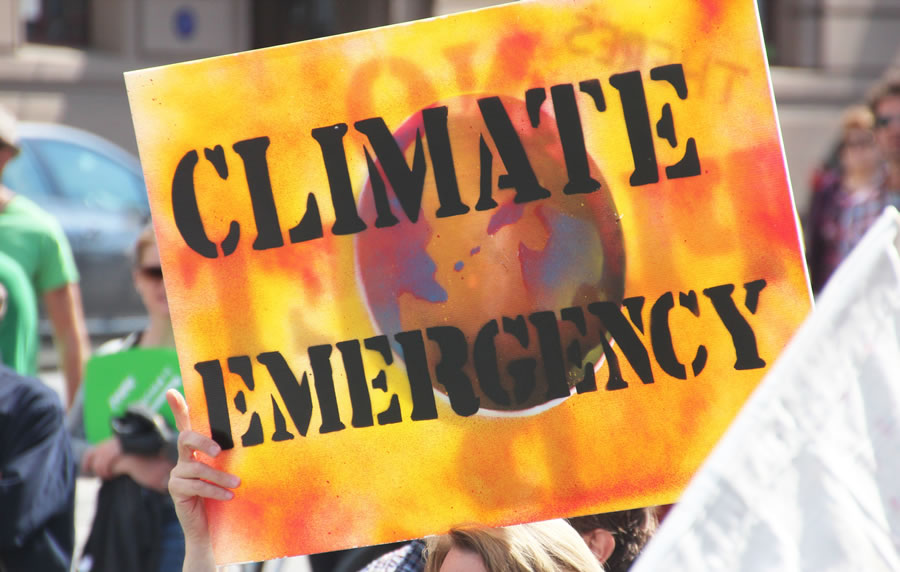 For many, thinking about the future of our planet is terrifying. According to a global survey reported by the BBC, 56 percent of young people believe that humanity is doomed because of climate change and 45 percent say that their anxiety about the climate affects their daily lives. Here in the U.S., the story is much the same; three-quarters of Americans believe that climate change will result in the extinction of man, and one in five millennials believe that that extinction will occur within their lifetime.

A college student recently wrote the following in a campus newspaper about her climate anxiety:

I stay up into the early hours of the morning, Googling some variation of “Is there hope for climate change,” and “Biden climate change plan good?” (…) I fret over every piece of waste I encounter, wondering whether I should trash it or wash it and hope it qualifies for the recycling bin. What if I wash the aluminum foil I heated leftover lasagna on, does it become recyclable then? The anxiety is crippling.

Many young people clearly are suffering intense climate anxiety. And who can blame them? Because so much of the information they consume on the issue — both from the news media and social media — is apocalyptic in nature, this is an inevitable outcome.

But is the messaging they are receiving even true? Is the anxiety they are feeling justified?

A sober examination of the facts and the science would suggest not.

So, in an effort to make the facts clear and perhaps provide a more comforting alternative to the dominant narrative among my peers, here are a few of the most common myths about the environment, debunked.

Myth #1: Human Extinction Due To Climate Change Is Imminent

At the source of much anxiety about climate change is the belief that humans are likely to go extinct sometime in the near future due to its effects. But that belief is just not correct.

Even the scientists most concerned about climate change rebuke this assertion. Michael Mann, who is a professor of atmospheric science at Penn State and a superstar of the movement to fight climate change, wrote that “There is no evidence of climate change scenarios that would render human beings extinct.”

Some of the fear about human extinction undoubtedly started after Rep. Alexandria Ocasio-Cortez declared, in 2019, that “The world is going to end in 12 years if we don’t address climate change.” But, as Shellenberger documents in his book, climate scientists from NASA said that “All the time-limited frames are bull****,” and a paleoclimate researcher at the University of Wisconsin-Madison said that her statement was a “mischaracterization.”

In short, there are virtually no scientists who believe, and there is no science to support, the idea that humans will go extinct from climate change.

Myth #2: The Climate Is Getting Substantially More Dangerous for Humans

Usually stemming from the belief that humans will go extinct from climate change is the perception that it is currently making life substantially more dangerous for humans. But, in fact, humans are actually much more protected from climate-related disasters than we were just 100 years ago.

Bjorn Lomborg, who is a visiting professor at Copenhagen Business School and a visiting fellow at Stanford University’s Hoover Institution, has shown — based on data from the International Disaster Database — that the individual risk of a climate-related death (i.e. from hurricanes, droughts, extreme temperatures, etc.) has declined by 98.9% since 1920.

It is certainly the case that models project storms and other climate-related events to get more intense going forward. But (aside from the fact models have historically failed to accurately predict future climate developments) that does not necessarily mean the positive trend over the past 100 years will reverse itself.

Yes, there is climate danger. But there is also climate resilience. The reason for the dramatic reduction in climate-related deaths over the past 100 years has been the rapid economic and technological development that has characterized the U.S. during that time. Whether it be more reliable infrastructure, access to cheap energy, or a better ability to forecast severe weather events before they take place, these have all led to rising human safety even in the face of climate change. And this has not only been observed in the U.S., but in countries around the world.

FEE’s Saul Zimet summed it up well when he wrote:

The climate resilience side of the equation, despite being at least as significant as the climate danger side, is often ignored in the models of future climate impact. This is because, while it is difficult to model a changing climate, it is impossible to model the future of human ingenuity, which will be composed of decisions and insights that only the people of the future can possibly know.

Myth #3: Natural Disasters Are Getting Substantially More Frequent And Severe

Every time there is a devastating hurricane, drought, heatwave, or wildfire, one can reliably expect the headlines in media outlets ranging from The New York Times to CNN to imply that these disasters are not only getting more frequent, but also more severe, due to climate change.

Roger Pielke Jr., professor of Environmental Studies at the University of Colorado, has studied both the frequency and impacts of various natural disasters. When it comes to the number of major hurricanes in the continental United States since 1900, he has not found a dramatic increase, but rather a slight decrease.

This is also a little weird. This is dated the very day another Cat 4 (Laura) made landfall, but which is absent. So the far right of the graph seems to be missing half the storms that would be there if it were up to date.

Aside from frequency, there is also the issue of intensity, of which there are two aspects. The first is how intense the storm itself is and the second is how much damage there is as a consequence of the storm. On the first question, the evidence is mixed. On the second question, it is true but misleading to say that the economic costs of natural disasters, including hurricanes, have gotten worse.

When Pielke Jr. looked into economic damages from natural disasters over time as a percentage of GDP, he found that they have actually declined.

The cost of natural disasters has been going down since 1990

The world’s leading expert on this is @RogerPielkeJr who testified before the Senate on this 2 days ago@SenatorTester asked the expert from the Union of Concerned Scientists to counter him & of course she couldn’t pic.twitter.com/wSPEojeqDX

Even so, the rising dollar number with respect to damages is often cited as evidence that hurricanes are getting worse. In Congressional Democrats’ letter advocating for a new Civilian Climate Corps (CCC), for example, they justified their claim of a “record-breaking cyclone season” by writing the following:

The United States experienced 22 billion-dollar weather and climate disasters in 2020, shattering the previous annual record of 16 events. 2020 was the worst fire season on record, burning over 10.2 million acres and costing over $16 billion in damages and $3 billion in suppression costs. The U.S. experienced a record-breaking 30 named tropical cyclones, 7 of which became billion-dollar disasters — also a new record.

But measuring the severity of hurricanes by how much economic damage they cause is misguided because, as Bjorn Lomborg explains in his book False Alarm, it fails to take into account a phenomenon known as the “expanding bull’s-eye effect.” He writes:

[S]imilar climate impacts will result in more costly disasters because an increasing number of people with more and more valuable assets are at risk. The expanding bull’s-eye effect can be thought of as an archery target, with the rings (showing population density) telling us how many people and possessions are at risk of being hit by an imaginary arrow, or natural disaster.

As the human population increases and development takes up a greater proportion of total land — especially in high-risk areas — more natural disasters will inevitably hit somewhere within the bull’s eye, thus causing more economic damage than if there was no development there. Over the past 100 years, such development and population increase have been widespread in the U.S. As a result, we would expect more people to now take up space within the bull’s-eye.

Similarly, when it comes to wildfires, the number of acres burned annually has decreased dramatically over time. In 2014, researchers from Auburn University and the Georgia Institute of Technology found “a significant declining trend” of global burned area since 1900. Based on this study, Lomborg writes “the global amount of area burned has declined by more than 540,000 square miles, from 1.9 million square miles in the early part of last century to 1.4 million square miles today.”

He has also, based on publicly available data, compiled his own numbers on the area burned in the U.S. since 1900 as a consequence of wildfires. His data show a similar trend, with burned area reducing dramatically over time.

Even with extreme warming, area burned will stay about same across century

but zoning and forest management much more important 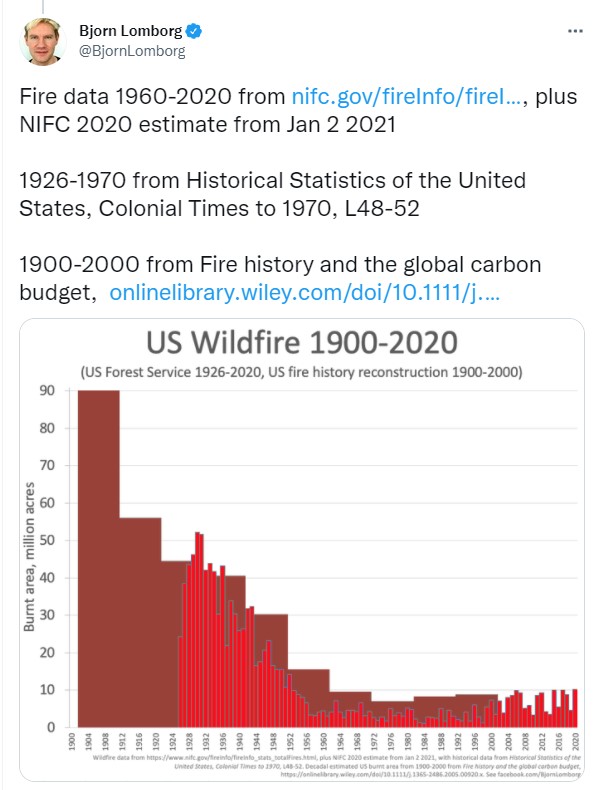 Moreover, a 2017 study published in Science found that “global burned area declined by ∼25% over the past 18 years.”

Despite these facts, it is also clear that more homes are now subject to the effects of wildfires than ever before. However, the reason for this can also be explained by the expanding bull’s-eye effect. In False Alarm, Lomborg notes that in 1940, there were only about 500,000 homes in high-fire-risk zones, but it was almost 7 million by 2010. To put that in perspective, the rate at which housing increased in high-fire-risk zones was more than 3 times higher than it was for the country generally. It should therefore be no surprise that more families’ homes are at risk today than they have been in the past.

However, this does not mean the world is ending; it does not mean you should stay up at night crippled with anxiety over the climate; it does not mean we should panic. Rather, we must understand why humanity has been able to adapt to a changing climate thus far and what steps are necessary to ensure human flourishing for generations to come.

Jack Elbaum is a Hazlitt Writing Fellow at FEE and an incoming sophomore at George Washington University. His writing has been featured in The Wall Street Journal, Newsweek, The New York Post, and the Washington Examiner. You can contact him at [email protected] and follow him on Twitter @Jack_Elbaum.