2000 MULES: What Must Be Said About Media Blackout 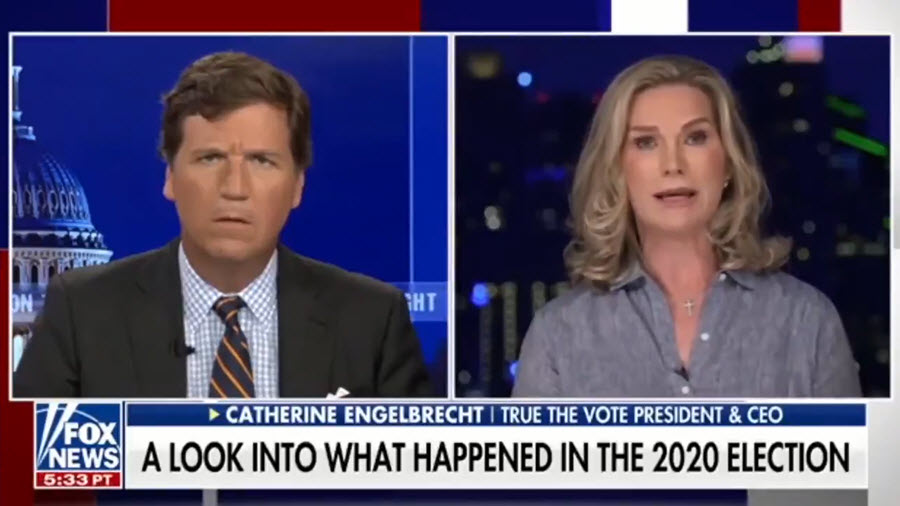 On May 5, when Catherine Engelbrecht of True the Vote went on Tucker Carlson’s FOX News show to discuss election fraud, she very strangely did not mention the name of the movie, 2000 MULES, she had produced with Dinesh D’Souza. The movie she thought she was there to promote, the one premiering that week.

Apparently, she’d been instructed not to.

The resulting conversation was bizarre. According to D’Souza, just before the interview, Tucker and producer Justin Wells quickly got with Engelbrecht and, incredibly, told her she couldn’t say the name of her film on the air. And she was forbidden to say the election was stolen. So if her speech during this interview seemed a little halting and unsure, it’s likely because she was self-editing on the fly.

As David Burge (Iowahawk) famously tweeted, “Journalism is about covering important stories. With a pillow, until they stop moving.”

The caption appearing onscreen was just “A Look Into What Happened in the 2020 Election.”

D’Souza himself has a similar story: he’d been booked on Grant Stinchfield’s Newsmax show but was abruptly canceled. “…why isn’t this a legitimate news story?” he tweeted. “How can so-called news networks pretend it doesn’t exist?”

Unlike FOX News, Newsmax did respond, with this statement:

Newsmax has covered ‘2000 Mules,’ including airing its trailer dozens of times, airing President Trump’s comments on it, and featuring ‘2000 Mules’ in our daily podcast. Also covered it on Newsmax.com.

We’ve allowed the for-profit ‘2000 Mules’ to run their ads on @Newsmax. We’ve extensively covered the 2020 election, its results, and President Trump’s challenges to the race. Voter integrity issues are of national importance.

Why, yes, it is. Still, it would’ve been nice for them to explain the cancelation.

The Left is Loving This

Needless to say, the Left is loving this. I’ll spare you links to stories from Newsweek, The Daily Beast and other Leftist outlets that call D’Souza a “far-left conspiracy theorist” (and worse) and his movie a “bizarre flick that baselessly claims the 2020 election was stolen,” and a “propaganda film peddling a wholly flawed and faulty premise about ballot fraud in the 2020 election.”

Really? We’ve read the so-called “fact” checks and found them to be amusingly insufficient. Word to the not-wise: saying a claim is “debunked” is not the same as actually debunking. Some left-leaning news outlets are linking to the “debunk” from PolitiFact as if it were definitive. Their “fact”-check is laughable.

Journalism is About Covering Important Stories

Yes, there are questions we’d ask about the claims in the film. We’d like to get experts on to go on record about how closely the geospatial cellphone tracking corresponds to a person’s movements. We’d also like to know if the filmmakers ever got security video of the same person at multiple drop boxes and if not, what the explanation for that would be. Of course, the same story is told when one cellphone ID shows up at different locations, but think how effective it would’ve been to see one person show up repeatedly!

If there weren’t such a media blackout on the movie, all this could be discussed in the light of day, on, say, FOX News. (Full disclosure: I’m a FOX News contributor.) That’s what the producers of this movie wanted. But as David Burge (Iowahawk) famously tweeted, “Journalism is about covering important stories. With a pillow, until they stop moving.”

Some Action is Being Taken in Response to 2000 MULES

My understanding is that most — perhaps all? — states require security cameras at drop boxes, but that many states ignore that requirement. Some states that do have cameras are withholding their video. And Freedom Of Information Act (FOIA) requests are being ignored, as is typical.

But in other states, such as Arizona, there’s action. The sheriff of Yuma County, who was in the film, says his office is teaming with the county recorder to investigate 2020 election fraud. They announced Wednesday that as of March, they had 16 open voter fraud cases. Not only are they looking at 2020, but they’ve seen evidence of a “pattern” of fraudulent voter registration forms ahead of the 2022 primary election. Engelbrecht at True the Vote is encouraged.

“What has been happening in Yuma County is happening across the country,” she said. “The targeting of vulnerable communities and vote abuse must be stopped.”

Arizona Attorney General Mark Brnovich has already indicted half a dozen people for illegal ballot harvesting. And D’Souza told investigative reporter John Solomon that the alleged Yuma County “mule” interviewed in the movie is cooperating with authorities. “It seems to be a direct response to the work of both True the Vote and the movie,” D’Souza said.

The Level of Interest is Insane

Solomon goes on to report that despite the lack of media and being relegated to alternative platforms such as Locals and Rumble, 2000 MULES has made over $10 million. D’Souza told him that in just five days, a million people have seen it, “which, for a political documentary, is like downright insane.”

Finally, for weekend reading, David Horowitz and John Perazzo have a must-read article about Mark Zuckerberg’s funding of that tax-exempt foundation, the Center for Tech and Civic Life (CTCL), largely to pay for drop boxes. For Biden to win, by the teensiest margin in history, all they needed to do was spend his strategic influx of cash on “harvesting” ballots and getting them dropped into artfully-placed boxes. $350 million went to their “Safe Elections” Project — as in, safe for the Democrat candidate? — and another $69.5 million went to the Center for Election Innovation and Research (CEIR), whose founder had been a director of People For The American Way. The money to both these foundations was funneled through yet another one, the Silicon Valley Community Foundation, which supports get-out-the-vote campaigns for the Democrat Party.

The article goes into much more detail about how they use these funds. They claim to be nonpartisan, but, clearly, that is a joke. In 2020, it was easy to use COVID as an excuse to do elections the “safe” way, which coincidentally made cheating safe, too, as easy as pie.

Read the whole thing and be shocked. The list of grants goes on and on, obviously targeted to help Democrats. As The Federalist has noted, “The practical effect of these massive, privately manipulated election-office funding disparities was to create a ‘shadow’ election system with a built-in structural bias that systematically favored Democratic voters over Republican voters.” It “essentially created a high-powered, concierge-like get-out-the-vote effort for Biden.”

And as the Internal Revenue Code unambiguously states, partisan political activity by non-profits is illegal.

The Lack of Real Reporting is Shameful

This is the sort of conversation a movie like 2000 MULES should be sparking in TV newsrooms. That would be real reporting, the lack of which is shameful. The political hacks at CNN, MSNBC, ABC, NBC, and CBS won’t permit it, and now we see they’re not the only ones who won’t. If this is some sort of “collusion” or “conspiracy” or “joint venture” among the powers that be, to maintain the illusion of an honest election process when we have something very different, then a real newsroom would distinguish itself by refusing to be a part of that.