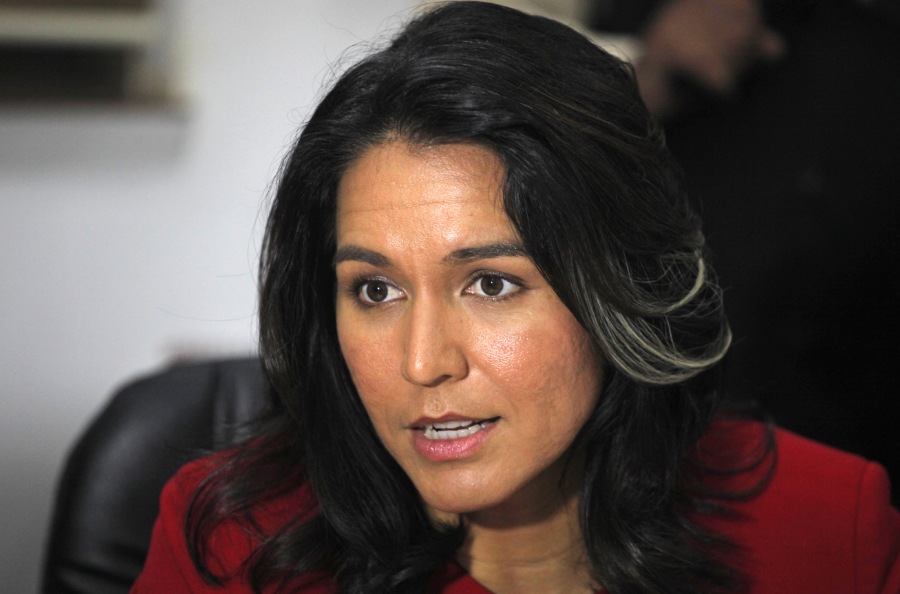 Democrats pride themselves on “diversity.”

With the new Congress, they’ve hailed two new Muslim House members, made accomodations for religious headwear on the House floor, and celebrated record numbers of minorities in their freshman class.

This penchant for diversity makes their growing blind spot all the more glaring. That blind spot is anti-Christian bigotry, seen in the hostile questions that Democratic senators have aimed at Trump nominees that inch dangerously close to a religious test for public office.

Until recently, only Republicans had cried foul.

Senators like James Lankford, R-Okla., and Mike Lee, R-Utah, came to the defense of Amy Coney Barrett in 2017, whose qualifications to sit on a U.S. appeals court were questioned on account of her “dogma.” One senator had the gall to ask her directly whether she considered herself “an orthodox Catholic.”

So it comes as genuine relief this week that a Democrat, finally, is saying enough is enough.

Rep. Tulsi Gabbard of Hawaii published a searing op-ed on Tuesday chiding her Democratic colleagues in the Senate for questioning Brian C. Buescher, a Trump judicial nominee, over his affiliation with the Knights of Columbus, the world’s largest Catholic civic organization.

Back in December, Sens. Kamala Harris, D-Calif., and Mazie Hirono, D-Hawaii, used their questioning time to scrutinize the Knights’ “extreme positions” on same-sex marriage and abortion. (Shock: The Knights of Columbus oppose both, in accordance with the Catholic Church.)

Hirono asked, “If confirmed, do you intend to end your membership with this organization to avoid any appearance of bias?”

Harris pried: “Were you aware that the Knights of Columbus opposed a woman’s right to choose when you joined the organization?”

Buescher answered: “I do not recall if I was aware whether the Knights of Columbus had taken a position on the abortion issue when I joined at the age of 18.”

In her editorial for The Hill, Gabbard pulled no punches toward her colleagues for using a man’s Catholic faith and affiliations against him. She wrote:

While I oppose the nomination of Brian Buescher to the U.S. District Court in Nebraska, I stand strongly against those who are fomenting religious bigotry, citing as disqualifiers Buescher’s Catholicism and his affiliation with the Knights of Columbus. If Buescher is ‘unqualified’ because of his Catholicism and affiliation with the Knights of Columbus, then President John F. Kennedy, and the ‘liberal lion of the Senate’ Ted Kennedy would have been ‘unqualified’ for the same reasons.

Gabbard was almost completely alone among progressives. Her side reacted furiously.

Tulsi Gabbard is accusing female senators of anti-Catholic bigotry for (rightly) questioning a judicial nominee's membership in an extreme right-wing anti-choice anti-LGBT all-male organization. Gabbard is not a progressive, she's a fraud. https://t.co/Be5uHYTxp2

But she wasn’t completely alone. Illinois Rep. Dan Lipinski, one of the only pro-life Democrats left in the House, voiced his concern on the matter:

I would never, ever have expected that membership in the Knights of Columbus would be something that would be viewed with suspicion and maybe even worse. It’s terrible to see membership in the Knights of Columbus questioned like that, but at the core this gets back to the question of religious freedom, and it’s something that we have to continue to speak out about because we, our country, can’t afford to lose that freedom that we’re guaranteed in the First Amendment to the Constitution.

Senators who dismiss the Knights of Columbus as “extreme” show just how little they know about the organization. The Knights mostly focus on charity work for the poor, disabled, and orphaned, while raising money to educate underprivileged students who come from all religious affiliations.

They have also been working to aid persecuted Christians in the Middle East and all over the world.

The Knights of Columbus are, essentially, a Catholic version of the Rotary Club. And the depth of their giving is impressive to say the least.

The Federalist’s Helen Raleigh put it best: “The only thing extreme about [the Knights of Columbus] is their generosity.”

As we have noted before at The Daily Signal, religious tests for public office are clearly forbidden by the Constitution. Senate Democrats’ increasing hostility to nominees who hold deep Christian beliefs is a regression back to a sectarian sensibility we thought we had left behind.

In the 1920s, there was heightened tension between Catholic and Protestant Christians in America. Some, like the Ku Klux Klan, openly questioned whether Catholics could even be Americans — especially in light of the sharp increase of immigrants from Catholic countries.

The Klan painted the Knights of Columbus as a Catholic conspiracy to overthrow the Constitution and install the pope in its place. It also waged a campaign to abolish increasingly popular Columbus Day celebrations, which it considered another dastardly Catholic attempt to normalize their religious beliefs.

Democratic Sen. Robert Byrd was the last ex-klansman to serve in the Senate. But it appears some modern progressives have amnesia and are picking up the anti-Catholic torch yet again.

Certainly, a judicial nominee’s views and legal positions are relevant as to whether they are fit to serve, but attempting to disqualify them for the simple fact that they are affiliated with a specific religious group is corrosive.

The charge against the Knights of Columbus, and Buescher, seems to be that their true religion is Catholicism and not progressivism. That is a religious test in disguise — but they cannot be allowed to get by with it.

The Heritage Foundation’s Joel Griffith recently pointed out that anti-Semitism has gained a new foothold in the 116th Congress. So has anti-Catholicism. But it’s encouraging to see two brave members of the Democratic Party finally pushing back. Let their tribe increase.