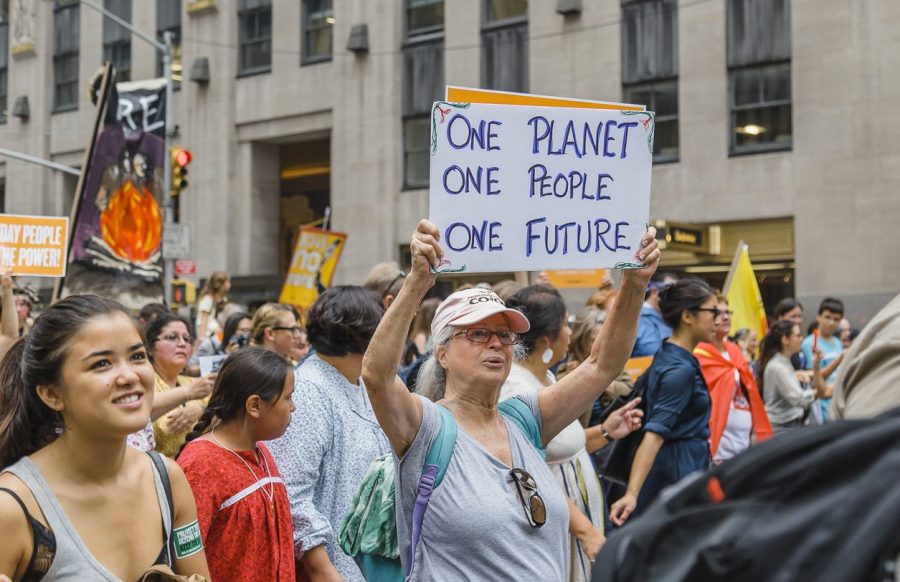 Manhattan, New York, USA — September 21, 2014: Woman carries a placard depicting ‘One Planet, One, People, One Future’ and protests against climate change at the People’s Climate March along 6th Avenue. While conservatives are generally skeptical of the anthropogenic global-warming thesis, often they don’t realize that increased atmospheric CO2 is actually beneficial.

Garbage in, garbage out is how it works with a computer. It’s no different with society: Misinformation yields misunderstandings and the adoption of misguided policy, personal and political.

The following are 10 liberal myths even many conservatives believe. How many did you know were commonly accepted fake news, fallacies or false history?

Not according to research. As Peter Schweizer reported in “Don’t listen to the liberals — Right-wingers really are nicer people, latest research shows,” relative to conservatives liberals are:

Studies also show liberals are less happy. Any idea why?

Whether it’s the dystopian 1973 film Soylent Green, Paul Ehrlich’s book The Population Bomb or something else, the modern psyche has been infused with Malthusian assumptions about inexorably increasing populations. The reality?

With fertility rates already below replacement level (2.1 children per woman) in approximately 100 nations, demographers say that while global population will reach about nine billion in 2050, it will begin declining quickly thereafter.

3. The world is becoming less religious

According to Pew Research Center, atheists, agnostics and those claiming no particular religion will actually lose population share over the next few decades. For faith begets fecundity: The secular are just not as likely to “be fruitful and multiply.”

As I demonstrated in 2014 using data from liberal Mother Jones, non-Hispanic whites commit mass murder at just about the rate their population share (currently 62 percent) would suggest. Don’t expect this myth to stop being a media meme, though.

5. Minor sex abuse is an unusually big problem in the Catholic Church

Actually, “according to Charol Shakeshaft, the researcher of a little-remembered 2004 study prepared for the U.S. Department of Education, ‘the physical sexual abuse of students in schools is likely more than 100 times the abuse by priests,’” reported LifeSite News in 2010.

It’s not surprising people assume otherwise, however. Consider: California’s 61 largest newspapers published almost 2,000 stories in the first half of 2002 about the Church scandal — and only four about the ongoing public-school scandal.

6. Most wars are caused by religion

History says otherwise. Whether the handiwork of Genghis Khan, Attila the Hun, Tamerlane, Alexander the Great, Julius Caesar, Napoleon, the Vikings, Hitler or someone else, warfare’s motivation was virtually always lust for land, wealth, resources, power and/or glory — not religious zeal.

7. The Middle Ages were a dreary period of ignorance, oppression and technological stagnation

According to Providence College professor Anthony Esolen in this PragerU video, medieval Europeans:

Professor Esolen states that the period was not the “Dark Ages” but the “Brilliant Ages.”

While conservatives are generally skeptical of the anthropogenic global-warming thesis, often they don’t realize that increased atmospheric CO2 is actually beneficial. Botanists pump the gas into greenhouses because it facilitates plant growth. Why do you think the Mesozoic era’s CO2 levels — five to 10 times today’s — yielded lush foliage?

A CO2-rich world is a green world.

9. The Crusades were imperialistic Western campaigns geared toward converting and pillaging a peaceful Muslim world

On the contrary, the Crusades were actually European wars of survival designed to repel Muslim armies. As Thomas Madden, chair of the History Department at Saint Louis University, put it, the Crusades “were not the brainchild of an ambitious pope or rapacious knights but a response to more than four centuries of conquests in which Muslims had already captured two-thirds of the old Christian world. At some point, Christianity as a faith and a culture had to defend itself or be subsumed by Islam. The Crusades were that defense.”

10. The courts have constitutional power to be the ultimate arbiter of laws’ meaning

Actually, judicial supremacy is not in the Constitution. Rather, the “power” was declared by the judiciary itself, notably in the 1803 Marbury v. Madison Supreme Court decision.

Since nothing in the Constitution dictates presidents must be constrained by judicial opinions, it’s not surprising they haven’t always felt compelled to be: Presidents Andrew Jackson and Abraham Lincoln both ignored court rulings during their administrations.

Reality is like a jigsaw puzzle: You can’t see the big picture without assembling enough pieces. And with untruths where facts should be, our puzzle remains puzzling at best — and presents a twisted image of ideology at worst.

Selwyn Duke (@SelwynDuke) has written for The Hill, The American Conservative, WorldNetDaily and American Thinker. He has also contributed to college textbooks published by Gale — Cengage Learning, has appeared on television and is a frequent guest on radio.

This article originally appeared in the Observer on February 17, 2017